RIP Walter Wolfgang. The Labour veteran who called Tony Blair 'the worst leader the Labour Party has ever had' - Canary 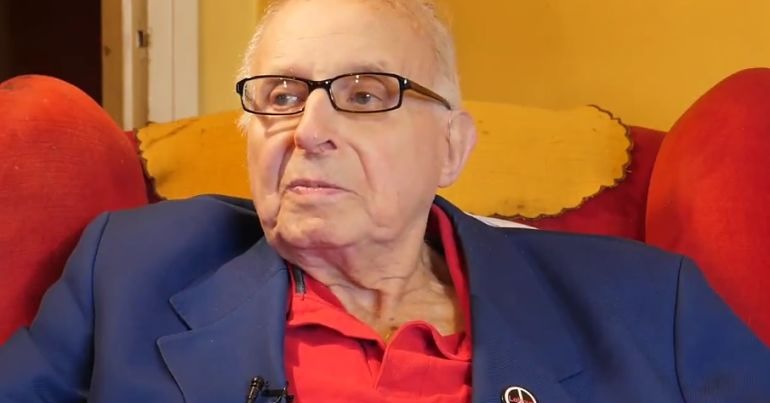 Walter Wolfgang, the Labour veteran and peace activist, has died.

The sad news has been greeted by a flood of tributes for the man who fled Nazi Germany as a Jewish refugee. But it’s his lifelong dedication to kicking power up the arse that he’ll largely be remembered for. Wolfgang achieved national notoriety after being violently thrown out of the Labour Party conference in 2005, under Tony Blair’s leadership. His crime? Opposing a speech by Jack Straw justifying the invasion of Iraq.

A life spent in Labour and political activism

Wolfgang was a Labour member for 70 years. He served on it’s National Executive Committee (NEC) and stood as a Labour candidate in Croydon.

In September 2018, he was given a Labour Party merit award by Jeremy Corbyn. But he claimed that he ‘didn’t deserve it’ and had “merely done what I had to do”:

His acceptance speech below also outlines his politics:

This is a touching acceptance speech from Walter Wolfgang.

Walter joined our Party in 1948 after fleeing Nazi Germany.

He has spent his life fighting for peace, justice and socialism. #Lab18 pic.twitter.com/2kuJIdP90h

“An awkward customer”, who stuck it to power (and nuclear power)

Wolfgang was renowned for sticking it to power, especially nuclear power.

He was one of the founding members of the CND (Campaign for Nuclear Disarmament). He was renowned for his disruptive activities. Indeed, an interviewer exploring his life of anti-nuclear activities affectionately described him as “an awkward customer”.

Wolfgang had the following to say on nukes:

An authoritarian Labour Party under Blair

Specifically addressing the party’s handling of debate regarding the invasion of Iraq, he wrote in the Independent:

It was foolish to have a foreign policy session at a conference in which the most important issues we face – Iraq and whether we are going to have more nuclear weapons – were barely discussed.

Party leaders have increasingly controlled conference over the last few years. We used to have a very inclusive culture in the party. But New Labour has damaged that. We must reclaim it before it is too late.

And referring to the infamous moment he heckled Labour’s Jack Straw, he said:

The Labour leaders have got so nervous of criticism that when I shouted the single word “nonsense”- when the Foreign Secretary sought to paper over the issue with smooth words – party officials sent the bouncers in. Even one word of criticism, it seems, was too much.

The sickening incident can be seen below:

Socialist, refugee from Nazism, long-time Labour Party member and opponent of the war in Iraq. pic.twitter.com/nteoRDsv76

Wolfgang’s views on the incident, and the reactions of others like the late Tony Benn, are also found in the 2007 documentary, Taking Liberties:

In light of his treatment, it’s unsurprising that Wolfgang’s evaluation of Blair was scathing. In 2005 he said Blair was:

the worst leader the Labour Party has ever had… Mr Blair’s instincts are basically those of a Tory.

I suspect that he is too theatrical even to realise that he is lying.

His opposition to Blair considered, it’s unsurprising that Wolfgang supported the leadership of his friend Corbyn.

Corbyn, after all, is Blair’s exact opposite. He’s supported the expansion of Labour Party democracy, opposed nuclear weapons and war, and fought for the protection of civil liberties.

Judging by the tributes, Wolfgang’s life has touched many people. Corbyn paid trIbute to his “old friend”:

Deeply saddened to hear that my old friend Walter Wolfgang has died.

Walter escaped Nazi Germany and has campaigned for peace and socialism ever since, including his passionate opposition to the Iraq War.

Yesterday, we said our goodbyes. He will be greatly missed. pic.twitter.com/CUUtmCzDrp

Another described him as a “dear friend” and posted the following:

My dear friend Walter Wolfgang died peacefully in hospital in the early hours of this morning, after a long and full life. A thoughtful man and committed socialist, he always spoke truth to power. pic.twitter.com/saIzEujzq4

The CND also paid tribute to one of its founding members:

We're very sad to learn that Walter Wolfgang has died. Walter was a founding member of CND and on the committee which organised the first Aldermaston march. Active with CND until the very end, we say thank you for the enormous contribution Walter made to peace and disarmament. pic.twitter.com/JJQKoafixy

When reminded in an interview for the Independent that nukes and wars remained despite his activism, he responded:

There is no reason to give up… We have helped to change the world for the better, in our way.

Arguably, the anti-nuclear mass movement Wolfgang was part of has helped prevent a nuclear war so far by putting pressure on government and swaying public opinion. He teaches us that although activism may not lead to immediate change, it can have greater long-term impacts than we realise.