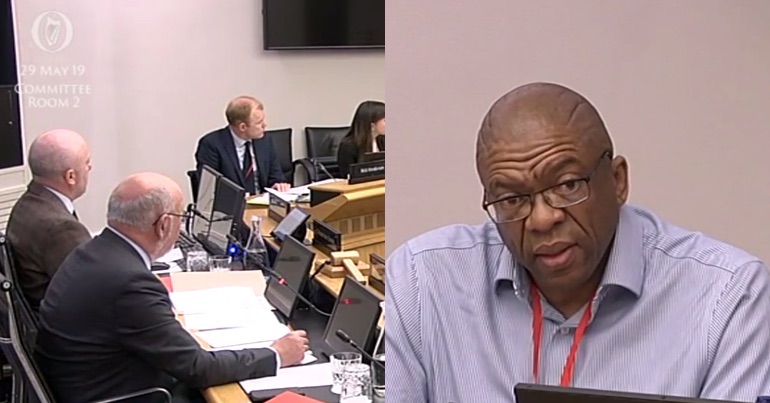 Asylum seekers in Ireland have spoken out about their treatment by the government. Appearing in front of a committee on justice and equality, they pointed to the cruelty and unfairness of Ireland’s asylum system. They argued that they “are human beings”, and all they ask “is that we be treated as such”.

Members of the Movement of Asylum Seekers in Ireland (MASI) gave a statement detailing their treatment as asylum seekers in Ireland. MASI’s representatives argued that its members “are uniquely placed to offer direction” on asylum issues in Ireland. They stated that:

Human rights are not gifts bestowed by governments and institutions; they are rights and entitlements that we all possess by virtue of being human.

Therefore, there must be no difference in treatment between people on the basis of their ethnicity or nationality. In spite of this, MASI pointed out that the government bans asylum seekers from working while living in direct provision — the system by which the government houses asylum seekers while it’s assessing their applications.

As a result of this ban on work:

There are children in Direct Provision forced to grow up in State sponsored poverty as their parents are unable to provide for their material needs. Many of them are too ashamed to tell their friends in school where they live.

A mother once told an Irish court that she had to sell sexual favours in order to support her child while living in Direct Provision.

MASI’s representatives also stated that “distressed asylum seekers” regularly get in contact with their group. They noted one case of a woman living in direct provision who is HIV positive. Given the lack of privacy, the other residents found out about her illness and “ostracised” her.

They also related the story of a woman who was unfairly treated by the International Protection Office (IPO). According to its website, the IPO is “responsible for processing applications for international protection”. This means it’s in charge of assessing asylum seekers. But the woman, who is from the LGBTQI+ community, told MASI that the IPO didn’t find her “credible”. And as a result, it refused her application for protection. MASI said:

MASI’s spokespeople argued that the asylum process should “vindicate” people’s rights, not “dehumanise” them.

MASI went on to make recommendations regarding how to make the asylum process more just. It called for the government to give asylum seekers “all necessary legal advice”. And it insisted “that the system is orientated towards vindicating peoples’ right to seek asylum and to live in safety”.

It further demanded that the government give asylum seekers the right to work. And it asked the government to scrap direct provision. Instead, it argued that:

people seeking asylum in Ireland should have access to the same housing supports via their local authorities as is the case for others.

We are human beings like you. All we ask is that we be treated as such. The very fact that people have to ask the government to treat them humanely should shame all of you.

The mental health of asylum seekers

During exchanges with the politicians gathered, members of MASI explained in more detail the Irish asylum system. And this included highlighting its many problems and the pressures asylum seekers live under. Donnah Vuma, also a member of MASI, explained how mental health issues are difficult to deal with in the current system.

Mental health is a serious issue for people living in direct provision. The biggest problem, I think, is that there’s no services at all that have been provided to us in the centres.

She also pointed out that some children living in direct provision are suffering from mental health issues. As a result of direct provision, she revealed how her youngest child has been dealing with mental illness, saying:

Over the past few months he has been showing signs of depression, to the point that he has come to me and said to me, ‘Sometimes when I feel sad I feel like killing myself’. This is a 9-year-old that is saying this to me.

Asylum seekers in Ireland have previously staged protests regarding their treatment. It is now on the government to do something for them. And this starts by listening to asylum seekers, ending direct provision, and treating them like humans.