In one stunning sentence, Noam Chomsky nails the most overlooked element of the pandemic - The Canary 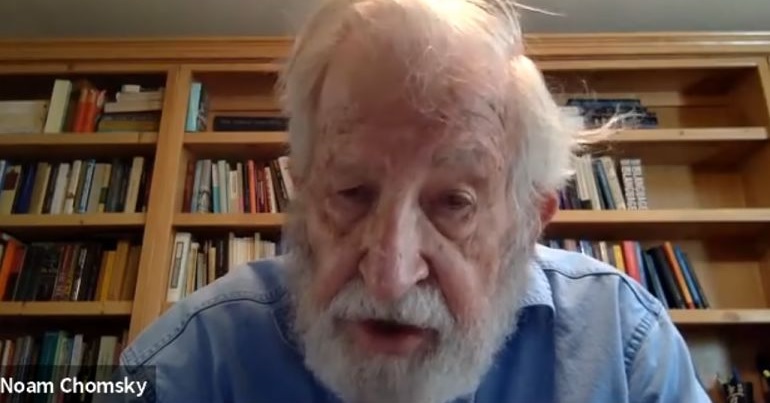 Renowned US intellectual, author, and commentator Noam Chomsky addressed the coronavirus (Covid-19) pandemic in a recent interview. Amid a global panic over the disease, he nailed the most overlooked element of the emergency.

Crucially, he pointed out that though coronavirus “can have terrifying consequences” there “will be recovery”. But there are other threats – the climate crisis and nuclear war –  where recovery is impossible if we don’t tackle them urgently.

coronavirus… can have terrifying consequences, but there will be recovery, while the [other threats], there won’t be recovery, it’s finished

“A much greater horror approaching”

There were over a million confirmed cases of coronavirus around the world on 3 April, according to the Johns Hopkins University. With wall-to-wall media coverage, ghastly daily death tolls, and livelihoods upturned because of the pandemic, many people are understandably terrified.

In an interview with Srecko Horvat, co-founder of the European initiative DiEM25, Chomsky addressed people’s concerns by putting them into a sobering context. He said:

The coronavirus is serious enough, but it’s worth recalling that there’s a much greater horror approaching. We are racing to the edge of disaster, far worse than anything that’s happened in human history. …

Chomsky pressed “If we don’t deal with them, we’re done”.

“In the lead in racing to the abyss”

Chomsky’s point is that although the coronavirus pandemic is consequential and serious, the world faces two far greater threats: the prospect of nuclear war and the rapidly evolving climate crisis. Failing to resolve those dangers, Chomsky says, would mean ‘we’re finished’.

That’s not to play down the impact of the coronavirus pandemic, which has so far prematurely ended the lives of over 50,000 people. The effects of the pandemic will be felt by many long after the outbreak subsides, as they grieve the loss of loved ones and struggle to make ends meet due to job losses or income reduction. Vulnerable communities in developing countries, meanwhile, will be severely hit economically too as commodity exports and tourism plummet amid the crisis.

But Chomsky is noting that the pandemic will, ultimately, pass and – managed humanely – the effects can be mitigated. The same is not true of the other threats.

The academic also names names. He says “Donald Trump and his minions are in the lead in racing to the abyss”. His assertion is perfectly illustrated by a recent decision by the US president. In a sickening move, Trump’s Environmental Protection Agency (EPA) announced an indefinite suspension of environmental rules. Essentially, the president has used the pandemic as an excuse to get rid of limits on environmental destruction. Earlier this year, the president’s administration announced its intention to change the National Environmental Policy Act. As Ross Barkan wrote in the Guardian at the time:

Under the rewritten rules, builders of highways, pipelines, and other major infrastructure projects would no longer have to consider climate change when assessing their impact.

Trump has also backed out of the Paris climate agreement.

The US leadership is by no means the only authority speeding us towards ‘the abyss’, though. The president of Brazil, Jair Bolsonaro, also appears determined to do away with much of the Amazon – the world’s vital air conditioner – during his tenure. They’re ‘permitting, encouraging and fuelling’ devastating fires in the region – so the rainforest land is clear for profit-making activities such as rearing cows – according to Brazilian politician David Miranda. In 2019, he wrote in a Guardian column:

The ongoing destruction of the Amazon is taking place because of policy choices made by those who now rule Brazil.

Meanwhile, Brazil’s leadership has sent personal thanks to the UK prime minister for opposing diplomatic efforts to limit the Amazon’s destruction. Alongside being a close comrade of planet-destroying Bolsonaro, Boris Johnson is also a devoted ally of environmental regulation shredder Trump.

The UK prime minister is less of an ally of his own country’s ecosystem, however. He’s recently approved the continuation of the highly environmentally destructive high speed rail project, HS2. The project is currently underway, with contractors ripping up ancient forests just as the wildlife within them is growing with the arrival of spring. The Woodland Trust described HS2’s decision to destroy nature just as it’s beginning its spring-induced life as “heartbreaking”.

The project faces a legal challenge from conservationist Chris Packham, who is initially seeking an injunction.

As Chomsky mentioned, civilisation also faces an existential threat from the prospect of nuclear war. He said this threat is “growing” because world powers, namely the US and Russia, have torn up “what’s left of the arms control regime”. Trump announced his intention to withdraw from a longstanding anti-proliferation treaty in 2018. He claimed Russia had already violated the arms control arrangement without providing evidence. Russia denied any violation – and has previously accused the US of violating the treaty too – but effectively said it would respond in kind to any ramping up of nuclear arms production by Trump.

Due to this dangerous situation with countries racing towards ‘the abyss’ of climate destruction and “the deterioration of democracy”, Chomsky says there’s been an alarming change on the Doomsday Clock. Created by the Bulletin of the Atomic Scientists, the clock assesses how close humanity is to ‘doomsday’, i.e. total man-made global disaster. Chomsky explained:

You can get a sense of where the world really is by looking to early this January… every year the Doomsday Clock is set with the minute-hand a certain distance from midnight, which means termination. …

This year the analysts dispensed with minutes, started moving to seconds. 100 seconds to midnight. That’s the closest it’s ever been.

So, while the coronavirus pandemic is deeply disruptive and destructive to our lives, as Chomsky says, we will recover from it. These other threats, however, will mean game over for humanity unless we take radical action to tackle them now. The coronavirus pandemic has revealed that radical action is possible on a global scale. We need to apply similar but greater measures to turning around climate breakdown and dangerous militarisation.

These are emergencies too, with unthinkable consequences. It’s high time we started wholeheartedly treating them as such.