As a nurse dies fighting coronavirus, Matt Hancock drops a bombshell about the monitoring of their deaths - Canary 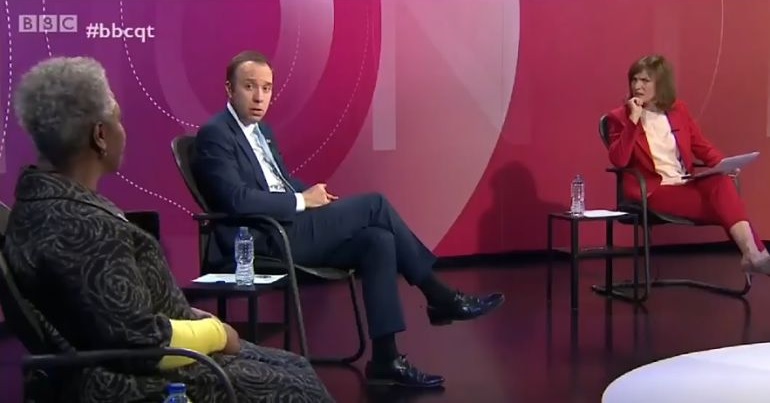 A nurse fighting coronavirus (covid-19) has tragically died due to the disease. Areema Nasreen worked at Walsall Manor Hospital.

Woke up to the heartbreaking news that Areema has passed away on intensive care due to coronavirus.. she was devoted to her nursing job & always full of life..she’s left 3 young children behind..I’m lost for words..I beg you all to stay at home and keep everyone safe.. 🙏 pic.twitter.com/ZJOFSvI1fo

The evening before the news of Nasreen’s death broke, health secretary Matt Hancock appeared on BBC Question Time. On the programme, he revealed a bombshell about the government’s monitoring of nurses’ deaths.

NHS staff are risking their lives by tirelessly working to treat coronavirus patients during the pandemic. They are, of course, regularly exposed to the disease in their jobs. Nonetheless, the government has only recently acted to increase coronavirus testing for these critical workers. Still, as of 2 April, only 2,800 frontline NHS staff had received testing out of 500,000 of them.

Adding grievous insult to that injury, Hancock made a shocking admission on Question Time:

Our government is not even counting the numbers of nurses who die. Incredible. https://t.co/Ba5nNAUTzj

He acknowledged on the programme that “nurses, doctors, all healthcare professionals, put themselves literally on the frontline”. He went on:

His vague reference to nurse fatalities was odd, given how specific he was on doctor deaths. But the reason for Hancock’s imprecision became apparent pretty swiftly – thanks to subsequent comments from the chief executive and general secretary of the Royal College of Nursing (RCN) Donna Kinnair. On nurses’ mortality rates, she said they’re:

not even counting the nurses

we haven’t even counted the nurses yet… I keep asking for the stats on nurses that are ill.

Okay. I didn’t know that. We will sort that out.

No wonder then that Hancock was vague when referring to nurse mortality rates in the pandemic. Not only does his government not appear to be ‘counting’ the nurses who are ill, the head of its health department didn’t appear to even know that a count wasn’t happening.

Yet again, on 2 April, people across the country stood in their streets applauding key workers in the NHS and elsewhere for carrying us through this pandemic. While that is heartening, clapping is not enough:

Citizens have to start putting their hands to good use at the ballot box and voting in officials who will treat our healthcare workers with the dignity, love, and respect they deserve.

A vote for the Tories is effectively a vote against providing that to NHS workers. Amid this pandemic, that brutal truth is clearer than ever.