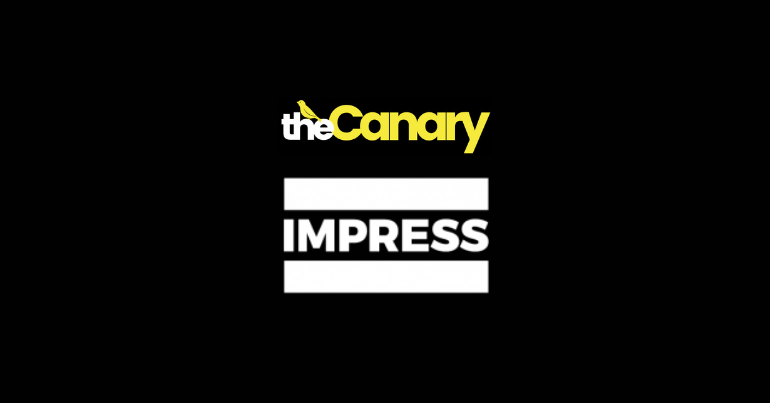 Earlier this year, our regulator IMPRESS launched an investigation into concerns about antisemitism at The Canary and Skwawkbox. IMPRESS is the only independent press regulator in the UK and the only regulator to be recognised by the UK government’s Press Recognition Panel.

Their investigation was launched in response to a report by Kings College London, commissioned by Lord Mann, the government’s antisemitism tzar. The IMPRESS investigation is now available. It concluded that there was no evidence of discrimination against Jewish people, that further investigation would not be justified and dismissed the matter.

Drew Rose, Editor-in-Chief, The Canary said: “We are pleased to have confirmation of what we have known all along – that we have adhered to the high journalistic standards set out in the IMPRESS Standards Code. In particular, we have upheld the code with respect to discrimination against Jewish people. As ever, we are grateful to our regulator, IMPRESS, for ensuring that our readership has opportunities to hold us to account.

“Earlier this year, allegations against The Canary were made in a government-funded report by Kings College London, figure-headed by Lord Mann as the government’s antisemitism tzar. It was right that IMPRESS conducted a preliminary investigation, even though the authors of the report had declined to make any formal complaint against us. IMPRESS examined the evidence cited by the report and found no breach of the relevant clause. This demonstrates the importance of truly independent press regulation.

”We hope that the findings of this investigation draw a line, once and for all, under the cynical campaign of disinformation waged against The Canary. We are, always have been, and will continue to be, an avowedly antiracist and antifascist news organisation.”

Nancy Mendoza, Chief Operations Officer, The Canary added: “This is welcome news following the impacts of a sustained witch hunt against socialists, which has been disingenuously framed as an effort to tackle antisemitism. As a Jewish person who has experienced genuine antisemitism, this has been a very upsetting and difficult experience. We have experienced a smear campaign that sought to harm our reputation and destroy our business. Beyond that, seeing so many socialist Jews being expelled from the Labour Party has been heartbreaking. The irony is that the harm the witch hunt has done to individual Jews likely far outweighs any success it may have had in tackling antisemitism.

“Throughout the witch hunt, there are numerous examples where we have been misrepresented; Lord Mann himself is certainly guilty of this. In an interview with the Jewish Chronicle, published 27 January, he implied that our readers do not have ‘a clear right of recourse to defend themselves’. Of course, as an independently and voluntarily regulated news outlet, this right existed long before Lord Mann’s report on antisemitism in alternative media was conceived. At best this suggests he is ignorant of the facts and at worst he has engaged in cynically misleading audiences – we may never know which it is.

“I, and I can speak for colleagues too, hope that this will reassure our readership that we remain committed to tackling racism and discrimination against any oppressed group.”

Emily Apple, Senior Editor, The Canary said: “The witch hunt has had a massive impact on my mental health and on the mental health of many others who’ve been targeted. It is an attack on what fundamentally defines us. It’s also why I cried when I read the IMPRESS report. I know I’m not publishing and writing hate speech. But having that backed up by our regulator is a massive step in countering the absurd accusations made by John Mann in his blatant vendetta against us. Like many people targeted by the witchhunt, I’m Jewish. I have family members who are Zionists. And it’s one of the reasons why I’ve always felt a real need to campaign on behalf of the Palestinian struggle – I feel a duty to say ‘not in my name’.”

We hope that our readers will join us in welcoming the IMPRESS report.