Amazon's Black Friday turns into a global disaster - The Canary 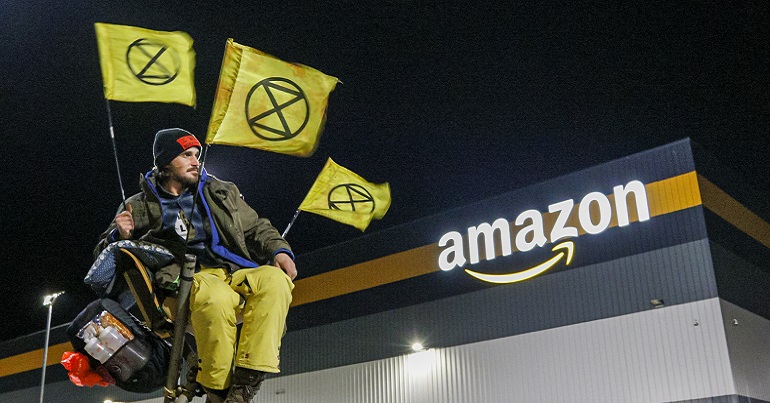 Amazon’s Black Friday saw it becoming the subject of blockades, strikes, and protests around the world as activists and campaigners targeted it over a list of “crimes” nearly as substantial as its founder Jeff Bezos’s bank balance.

As reported by PA, Extinction Rebellion (XR) has been blockading Amazon distribution (“fulfilment“) centres around the UK. PA noted that XR’s Black Friday demonstration involving around 20 activists started at 4am at the distribution centre in Dunfermline, Fife. The group said it was also targeting Amazon sites in Doncaster, Darlington, Newcastle, Manchester, Peterborough, Derby, Coventry, Rugeley, Dartford, Bristol, Tilbury, and Milton Keynes. XR said in a press release that the UK action was part of Europe-wide disruption. It has also been targeting fulfilment centres in Germany and the Netherlands.

PA reported that protesters with lock-ons and placards had stopped lorries entering the Fife site and some from leaving. In the Midlands, XR disrupted three Amazon fulfilment centres:

It also blockaded a site in Essex:

Extinction Rebellion protesters are continuing to block the entrance to the Amazon warehouse in Tilbury this morning.

It's in protest at Black Friday. pic.twitter.com/hL0iV1BZq7

The group said in a press release that:

The action is taking place on Black Friday in order to confront the exploitative and environmentally destructive business practices of one of the world’s largest companies. Amazon is known for a long list of widely recognised “crimes”… while making its founder and largest shareholder Jeff Bezos one of the richest men on earth.

We have to recognise that the consumption in the global north is largely based upon the exploitation of the working class and the global south, while companies like Amazon make massive profits and contribute to worsening the climate and ecological crisis.

We need a new system that respects people and the planet, instead of blindly chasing profit.

Make Amazon Pay is a global coalition of campaign groups that’s also been taking action against the company. Make Amazon Pay has organised protests and strikes by Amazon workers around the world. For example, workers walked out in Germany:

Today, there are strikes of workers in many sites in Germany. This pic show the workers in FRA3. We think this is an amazing start for #MakeAmazonPay 2021. However on #BlackFriday will happen much more all over the. 🌍As the banner says: We are strong together! 💪💪🏽🦾 pic.twitter.com/IbsRTjkw4B

The group released a video:

From Brazil to Bangladesh, workers are rising up in the largest mobilization against Amazon in history.

Make Amazon Pay has a list of common demands for the company. They include calls for Amazon to:

Hitting Amazon where it hurts?

Amazon’s growing power is a threat to communities and workers around the world. Amazon is abusing its dominance across online retail, cloud services, and logistics, to create unfair competition that is driving down standards for everyone. Amazon workers face unsafe conditions, constant surveillance and are treated like robots.

It’s time for Amazon to pay fair wages, fair taxes, and for its impact on the planet.

It will be interesting to see if the Black Friday chaos for Amazon has hit it and Bezos where it really hurts – in their wallets.