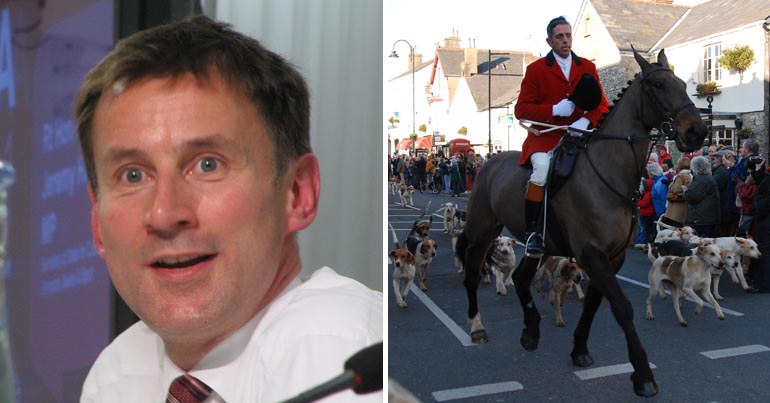 Jeremy Hunt has said that he would support a vote on lifting the hunting ban if he became prime minister. But he seemed to change his mind within hours after facing an overwhelming backlash. And it shows just how much the British public hates the pastime.

In an interview with the Telegraph published on 3 July, Tory leadership hopeful Hunt said he would “support a vote in Parliament” on lifting the hunting ban. He justified this by claiming it’s part of “the countryside” and “our heritage”. Furthermore, Hunt stated that he himself would vote to repeal the law. However, he also said that he would wait until “there was a majority in Parliament” before putting forward the vote.

Outgoing prime minister Theresa May tried a similar stunt during the run-up to the 2017 General Election. She backtracked after strong opposition to the idea. May said at the time that there were “clear messages” of ‘concern’ from the public about the plans.

I was just restating the position in our manifesto from 2017 that there should be a free vote if it ever looked like that majority would change. But it would not be my priority as prime minister.

As the Telegraph highlighted, Hunt faced criticism even from fellow Tory MPs. Julian Knight, MP for Solihull, said: “We can’t seriously be talking about this again”. Meanwhile Kevin Foster, MP for Torquay and Paignton, described hunting as “cruel” and said there was “no chance” of it coming back. And BuzzFeed UK reporter Alex Wickham said an anonymous Tory MP described the statement as “political suicide”.

Jane Evans of Labour Animal Welfare Society (LAWS) told The Canary that any attempt to repeal the Hunting Act is a “vote loser”:

It shows just out of touch Hunt is with the majority of ordinary people. It’s clear from the outrage shown by people and even his parliamentary colleagues, just how out of touch he is. The Hunting Act should be enforced without fear or favour and strengthened to outlaw trail hunting, and most definitely not repealed.

Hunt and Johnson should take on board the views of over 80% of the population and consign this barbarity to the history books… once and for all. It’s time to strengthen the Hunting Act, so that it can be enforced without fear or favour.

It is incredible and shocking that Jeremy Hunt, who aspires to be the next prime minister, can not bring himself to even acknowledge the barbaric cruelty of fox hunting.

Once again it shows this Tory government’s lack of understanding and sincerity on issues of animal welfare.

Hayman also claimed Labour was “proud” to bring the Hunting Act in. But Tony Blair famously admitted that the hunting ban was his biggest regret, and that he tried to sabotage the law. However, Labour’s last manifesto committed to strengthening the Hunting Act. And leader Jeremy Corbyn shared a petition to protect the ban in the wake of Hunt’s comments.

As The Canary recently reported, Hunt’s leadership rival Boris Johnson is also no friend to the Hunting Act. One of Johnson’s biggest donors is Johan Christofferson, a long-time hunt master who has a history of supporting pro-hunt MPs.

It’s no surprise that the Conservative Party is the home of the hunting fraternity. But the willingness with which its most senior members are willing to back an end to the ban should be a concern to everyone. Saboteurs and monitors are still saving lives and holding hunts accountable more than 15 years after the ban came into force. It’s therefore essential the rest of us don’t give any ground to weakening or repealing the law.

In fact, as Evans said, it’s time that Parliament strengthened the ban to end hunting for good.