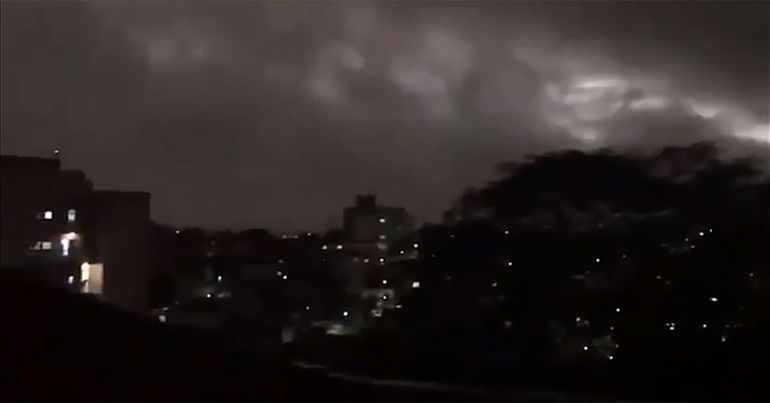 Brazil’s official monitoring agency has reported a sharp increase in Amazon wildfires this year. The National Institute for Space Research, a federal agency monitoring deforestation and wildfires, said the country has seen a record number of wildfires this year, counting 74,155 by 20 August, an 84% increase compared to the same period last year.

This comes as far-right president Jair Bolsonaro has sought to open the Amazon up to more ‘development and economic opportunities’ – a strategy that may tie into the rising number of fires. The increased exploitation of the Amazon, meanwhile, could seriously hinder the global fight against climate breakdown.

The UN’s World Meteorological Organization showed the extent of smoke from the fires:

From the other side of Earth, here’s the latest on the Amazonia fires 🌳

And video reportedly shot during the daytime appeared to show São Paulo plunged into darkness:

This is the sky of the biggest city in the country of Brazil, São Paulo at 2-3 P.M.

The smoke of the burning Amazon Rainforest has covered it entirely.

OUR PLANET IS DETERIORATING BEFORE OUR EYES AS A RESULT OF CLIMATE CHANGE!

Greenpeace, meanwhile, criticised the media for putting such little focus on the fires:

When Notre Dame burned it was on the front page of every major UK newspaper.

The Amazon rainforest has been burning for over two weeks but take a look at today's front page.

Why is there not more outrage?! This is a #ClimateEmergency

Bolsonaro has suggested, without citing evidence, that non-governmental organisations (NGOs) could be setting the fires to make him look bad.

“Maybe — I am not affirming it — these ([NGO] people) are carrying out some criminal actions to draw attention against me, against the government of Brazil”, Bolsonaro said in a video posted on his Facebook account. “This is the war we are facing”. When asked by reporters if he had evidence, he didn’t provide any.

However, earlier Bolsonaro had said, according to Reuters:

I used to be called Captain Chainsaw. Now I am Nero, setting the Amazon aflame.

He was suggesting it was normal for farmers to use fire to clear land as it was the “season of the queimada”, or ‘the burning season’.

So the big plan was to go to school for years to become a scientist, train in laboratories with specimens & complex maps, then move your family to the jungle, risk your life trying to save trees & animals for little pay, and then at the end set fire to it all. pic.twitter.com/SlgzmlU5Mq

Everyone else blames the president

Scientist Alex Lees refers to a “Day of Fire” on 10 August, when farmers allegedly set fires as a statement to Bolsonaro that they were “ready to work”:

Cattle ranchers in southern Amazonia organised a 'Day of Fire' on 10/08/19 https://t.co/Kk9WA45qCN to show Brazilian President #Bolsonaro that they are "ready to work" by starting at least 124 forest fires around Novo Progresso. Image @NOAASatellites 1/3 pic.twitter.com/3uXDizA5Jq

The president and his environment minister Ricardo Salles are both close to the powerful rural bloc in congress and have been urging more development and economic opportunities in the Amazon region, which they consider overly protected by current legislation. openDemocracy has revealed the extreme extent of these plans and how they may tie into the outbreak of fires. The policy has included transferring responsibility for indigenous people’s land claims to the Ministry of Agriculture. The Brazilian beef industry, which is a growing player in the UK market, faces allegations of using slave labour. It also allegedly carries out illegal deforestation.

Some NGOs, environmentalists, and academics have been blaming Bolsonaro’s pro-‘development’ policies for a sharp increase in Amazon deforestation shown in the latest data from the space research institute. The government is also facing international pressure to protect the vast rainforest from illegal logging or mining activities. The National Oceanic and Atmospheric Administration explains how a combination of deforestation and climate breakdown is making the Amazon rainforest less fire-resistant. And the fires themselves may be making the situation worse by suppressing the formation of rainclouds.

With the Amazon often called the “lungs of the planet”, it seems Bolsonaro’s power games may affect the whole Earth.