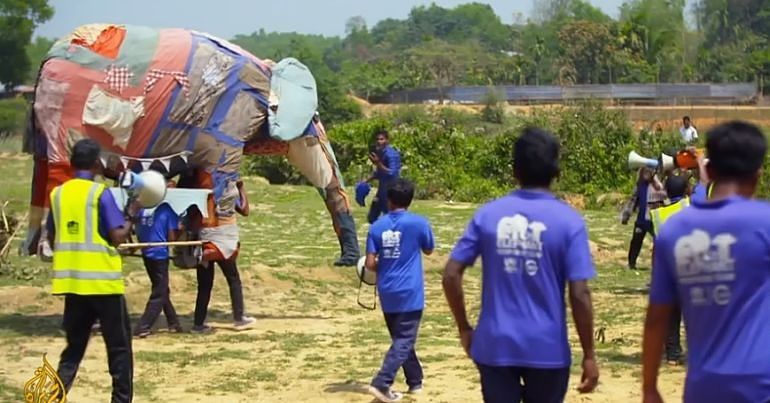 According to the United Nations, the Rohingya people faced a potential genocide at the hands of the Burmese military in 2017.  Now, Bangladesh houses over a million mostly-ethnic Rohingya refugees who fled the massacres.

But the vast refugee camps in the country have cut through the migratory path of the critically endangered elephants there. And the Rohingya’s response to the violence they’ve faced from elephants will restore your faith in humanity.

“He saved us from the genocides of Myanmar”

As Al Jazeera reported in August, 13 people died within the space of five months due to elephants ‘trekking’ through the camp. The outlet spoke to one woman who experienced the conflict firsthand:

I woke up when I got hit by the trunk of the elephant… My husband was holding me. It smashed my husband. My face and chest were covered with his blood… On the way to the medical centre he bled to death.

The children lost their father, I lost my husband… He saved us from the genocides of Myanmar.

But the Rohingya are not exacting revenge on the elephants. Instead, they have come up with a plan to keep both themselves and the elephants safe.

An investigation into the cause of the elephant-related deaths revealed that the camps “severed a vital lifeline” for Bangladesh’s elephants by blocking “their only path to central grazing grounds in the East”. As Bangladesh Representative for the International Union for Conservation of Nature (IUCN) Raquib Amin told Al Jazeera:

Elephant is not necessarily a violent mammal. It’s very intelligent, it understands, it has emotions. It’s just that it’s lost its habitat, it’s desperate

So the Rohingya have set up a ‘Tusk Force’. The 500-strong group is trying to limit any potential conflict between the Rohingya and the around 260 remaining elephants in Bangladesh. In coordination with the IUCN, the group have built 94 watchtowers around the camp. When they see an elephant approach, the Tusk Force forms a human shield around the elephant and shepherds it away from the refugees. But this is only a temporary solution to the issue. As Al Jazeera reports, a longer term plan is underway to:

The Rohingya are also teaching their children to peacefully coexist with the elephants. As part of the curriculum in the camps schools, the children learn that they shouldn’t be violent towards elephants. Indeed, they learn that ‘the elephant is their friend’.

As The Canary has previously reported, Asian elephants are in serious peril. Like their African counterparts, they are threatened by habitat loss, poaching, and human/wildlife conflict. Thousands of Asian elephants are also subject to the most horrific torture to make them pliable for use in the tourist trade. In fact, many British tourists are bankrolling this torture as UK tour operators continue to sell them holidays that include experiences with these tramatised giants. A petition by Save the Asian Elephants (STAE) calling on the UK government to take action to protect the Asian elephant recently exceeded 650,000 signatures.

We could learn a lot from the Rohingya’s interaction with Bangladesh’s elephants. Despite the tragedies involved in their initial contact, they’re building a relationship based on the mutual safety, happiness, and needs of each other. Their plan is one of peaceful coexistence. If only the rest of the world would follow that example.