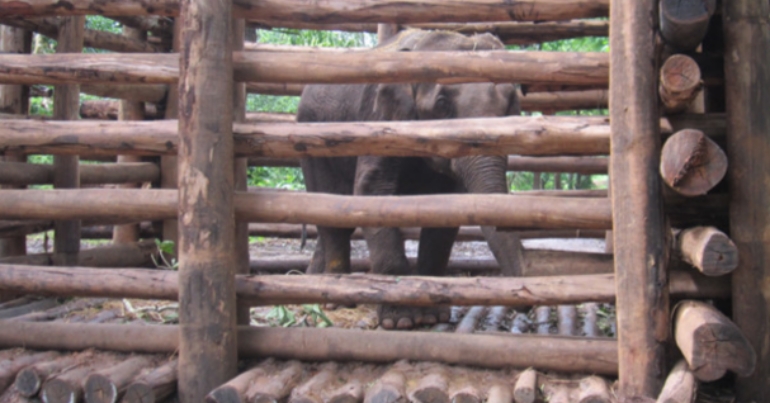 Britain’s travel companies are duping tourists to bankroll what Action for Elephants UK says is “arguably the worst case of animal cruelty in the world”.

Specifically, the charity is referring to the treatment of festival elephants in Kerala, India. But as the group Save The Asian Elephants (STAE) points out, elephants across Asia suffer the same treatment as those in Kerala. Their ‘keepers’ (mahouts) routinely beat, starve, stab, chain and physically ‘crush’ them to ‘break their spirits’ and make them compliant for use in festivals and tourism.

But UK travel companies and the trade association to which many belong, ABTA, continue to make British travellers complicit in these “horrors” by selling them holidays that include experiences with these elephants. The Canary sat down with STAE’s founder and CEO Duncan McNair to find out more.

STAE aims to raise awareness of the plight of “these wondrous but beleaguered creatures” in Asia. McNair says it’s an issue that “desperately needs more awareness”, not least because the UK was the third largest tourist market for India in 2017. McNair explains what British tourists booked onto holidays involving these elephants aren’t told about how they’re obtained and ‘trained’:

The sad rite of passage of a young baby elephant is, it’s in the wild with its mother, and its herd, which is usually very maternal – it’s the aunts and granny and so on – and many perils are laid in the way of young elephants. Pits dug in the ground so the baby falls in and can’t be recovered by the herd, which drives them all mad with anxiety. Nets, for example, but also just the roping up of the baby and dragging away… the mother is often killed and six or seven members of the herd are killed who try desperately to protect it.

The baby is taken away far too young… sometimes only three or four months old… taken away, isolated, which is disastrous, psychologically for… highly social animals. It’s kept awake with massive noise, it’s starved and dehydrated. It’s often put in a wooden cage called a crushing cage… and the bars are gradually closed in on it. Then it’s beaten and stabbed… and sometimes set on fire, on its legs, repeatedly over weeks.

Ultimately, through the stabbings and beatings its spirit is broken as it screams and cries.

Once the elephant is broken this way, known as pajan, then it’s ready for ‘entertaining’ people in tourist attractions and festivals. Though McNair says:

50% [of elephant calves] die during the process or later from heart attacks and broken spirits.

Tragic insights to the lost life of a young elephant snatched from its home for tourism: shackled, beaten & stabbed for 'training', going mad in its lonely despair. Join STAE's demand to @VirginHolidays @TUIUK @ThomasCookUK to agree a legal ban on brutal ads @NickyAACampbell pic.twitter.com/9EaerDuTNg

STAE’s director also explains that once the elephants are “forced into service” for people’s profit “that’s not where the torture stops, it’s where it begins”. He continued:

McNair says the “whole process is gratuitous” too. Because elephants have bent to people’s will for “thousands of years” using positive reinforcement:

In days gone by, the relationship between the mahout and the elephant itself was built on a long bond of trust.

After addressing the fact that elephants, of course, would prefer to live a natural life in the wild, McNair then explained why the relationship between mahout and elephant changed for those forced into servitude:

The big change came… 40 or 50 years ago, with the arrival of package holidays and the intensive commercialisation of elephants for use in tourism, largely from the West.

Travesty of our own making

So, the tourism industry bears some responsibility for the fact abuse started because the process of ‘training’ elephants changed to suit its demands. And it benefits from abused elephants to this day. McNair says  “a very small minority” of companies have gone “distinctly ethical” but that:

Very few UK travel companies have taken any adequate steps at all to make sure that they send people to places only that are safe, both for the elephants and for the tourists. On the contrary, they’re behaving in a reckless way… shoving their heads in the sand and, frankly, shoving their customers’ heads in the sand.

That leads to fatal and certainly dangerous consequences on a regular basis. Tourists attacked by elephants that are maddened beyond their endurance by torture, stabbing and the rest.

For the wellbeing of everyone involved then – animals and people – STAE is calling on travel companies to exclude such attractions from their itineraries.

In the UK, ABTA is the association of travel agents. It also claims to be a “trusted travel brand” for the public. Its website says:

Booking your holiday with an ABTA Member means that you’ll be able to relax safe in the knowledge that you’ve booked with a reputable travel company.

It also recognises that tourists “want to be assured of good animal welfare standards” at animal attractions. Indeed, in a statement, ABTA told The Canary:

The welfare of animals in tourism is a very important issue for ABTA and a huge priority for our work, which covers all types of animal activities across all parts of the world, including elephants.

We strongly believe that elephants should not be subject to punishment or cruelty.

As such, it’s produced ‘guidelines’ for its members on “good practice” in animal welfare. But McNair describes ABTA as a “trading body to represent and to protect the commercial interests of their corporate members”. He says:

We must never forget that ABTA’s purpose is the bottom line of their members. They are a trade body representing the tour companies who make millions from this brutality. Are they really the right body from whom anyone should take a lead when it comes to the very different matter of the welfare of wildlife species in captivity?

McNair highlights ABTA’s welfare guidelines as a case in point. Although the association keeps its guidelines ‘secret’, i.e. they’re not freely available to the public, STAE has seen them. McNair, who’s a lawyer, says:

They are a very poor piece of work… I’ve tried to take a lawyer’s eye to what they mean. They are confused, confusing, they use all manner of contradictory terminology such as ‘best practice’, such as ‘minimum requirements’… That confusion leads to anyone who does want to take them up – and they’re entirely voluntary, which itself is absurd – won’t know what they mean.

They appear to be window dressing so ABTA can say ‘what a great job we’re doing, book your holiday with our members’.

ABTA used similar language in its statement to The Canary:

Understanding the complexities around animals in tourism, including the dependence on animals for livelihoods and cultural attitudes, is an important part of this work. Travel companies are working through these issues with the local people and businesses, helping them to move away from bad practices and towards more positive forms of elephant tourism.

Of course, there’s a vast difference between saying elephants ‘should’ have the five freedoms rather than ‘must’ have them. ‘Discouraging’ physical contact with elephants is also different from ‘banning’ it. And the use of words like ‘bad practice’, rather than ‘torture’, ‘beating’, ‘crushing’, and ‘violence’, leaves a lot open to interpretation.

Furthermore, McNair says ABTA has provided STAE “zero evidence” that its voluntary guidance has created any benefit to elephants.

It’s on us and our governments

With the industry so clearly failing to regulate itself in regards to the welfare of Asian elephants and the tourists they interact with, STAE is calling for the UK government to legislate on the issue. It’s demanding:

a new law – supported overwhelmingly by the British public according to all indicators such as independent polls, petitions and audience responses – that provides that it shall be unlawful to advertise, promote or sell holidays, resorts or facilities anywhere that involve the unethical treatment of Asian elephants.

STAE also wants the public to lobby their MPs:

Chained, starved, beaten, stabbed, lonely, terrified – the only reason elephants allow tourists on their back & other interaction. Please tell your MP & travel agent you #StandWithSTAE against brutal Asian elephant holidays & the ongoing failure to change by @ABTAtravel pic.twitter.com/m1S7P3aR9z

It’s already garnered over 550,000 signatures for a petition that urges the UK government to act on a manifesto commitment to provide support for the protection of the Asian elephant. The petition also calls on India’s prime minister Narendra Modi to end the brutal practice of pajan and either release captive elephants or place them in genuine sanctuaries.

Until a new UK law is introduced, STAE advises people to challenge any travel company they’re thinking of travelling with about the practices of the elephant facilities in question. If the answer is not satisfactory, then people should avoid that company, or forgo an elephant-related holiday altogether if no ethical ones are available.

People would be wise to take that advice. There are only around 38,000 of these magnificent creatures left in our world. Those in the wild are rapidly diminishing due to loss of habitat and the conflict with humans that results from that. The roughly 10,000 Asian elephants in captivity are, as demonstrated, also regularly dying from trauma, mistreatment and, essentially, heartbreak.

Don’t be one of the British tourists who, wittingly or not, are facilitating that torture and death.