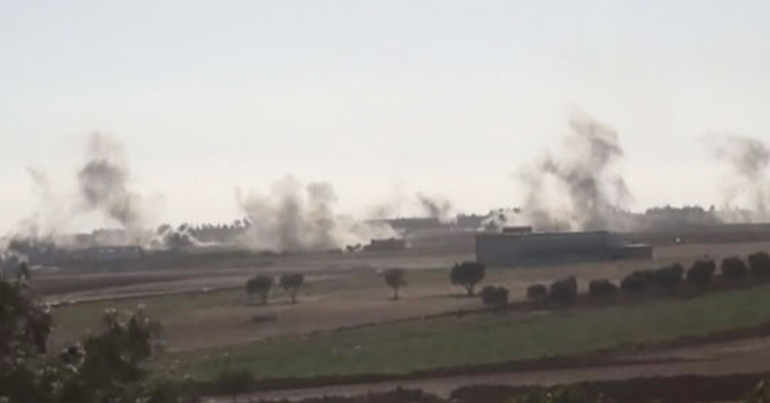 The Turkish army and its allies have begun attacking the Kurdish majority region of Rojava (northeastern Syria). The Kurdish ANF News Agency reported that at least five civilians and five fighters have been wounded by “howitzers and tank fire” in the area of Til Rifat, Shera and Shehba.

This follows a previous attack on Shehba by Turkish forces on 1 May.

Til Rifat and Shehba lie next to Afrin. In January 2018, the Turkish army and its Islamist proxy forces invaded Afrin. They have occupied it ever since.

Since the invasion, the occupying forces have carried out torture, forced disappearances and looting. Many of Afrin’s residents have been killed or imprisoned. And members of Turkish backed militia groups have been moved into the homes of displaced Afrin residents.

Refugees from the Afrin invasion

Til Rifat reportedly hosts thousands of refugees from the Turkish invasion and occupation of Afrin:

The scale of the current attacks is not yet clear. But what is clear is that Turkish president Recep Tayyip Erdoğan has made repeated threats to launch a full-scale invasion of Rojava. He hopes to destroy the revolution which has been underway in the region since 2012 in the same way he tried to crush the Kurdish population within Turkey’s borders when they declared autonomy in 2015.

The Canary spoke to Charlie Qereçox, who fought for the YPG (Rojava’s People’s Protection Units) against Daesh (ISIS/ISIL) in Raqqa in 2017. Qereçox said the attack was “no surprise”:

It’s no surprise that Turkish troops are advancing towards the refugee camps where the survivors of ethnic cleansing in Afrin are sheltering. Erdoğan has made no secret of his plans to annex all of northern Syria, or of his genocidal policies towards the Kurds, Yezidis, and Armenians living there. The only question is how far the international coalition is willing to let him go.

We must expand our actions, connect them and internationalise them. We have to trespass from a politics of protest to permanent political resistance. The Turkish army is firing their weapons, and NATO is providing the ammunition. The people of Kurdistan and Northern Syria are already responding to these attacks. We, as anti-fascists and revolutionary forces, will take action – through occupation, blockade and disruption – against the places of military, diplomatic and economical cooperation for Turkish fascism in our countries… we will show solidarity.

As the military offensive continues, it’s down to all of us to take up that call.