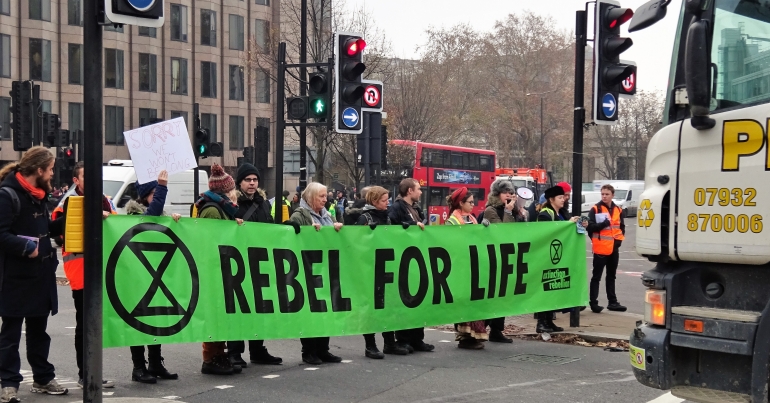 Two powerful open letters from experienced activists share vital advice with “peaceful civil disobedience” group Extinction Rebellion (XR). Everyone who is concerned about the environment and the impact of climate chaos needs to read these letters.

Both the letters offer love and support to the rebellion which brought London to a standstill and ended in over 1,000 arrests during ten days of occupation and protest in April. But the letters also address head-on concerns many people have expressed over XR and offer a vitally important perspective.

“The fight for climate justice is the fight of our lives”

On 3 May, Red Pepper published an open letter from grassroots collective Wretched of The Earth. The collaborative letter reflects the perspective of over 20 campaign and activist groups, ranging from Black Lives Matter UK to Disabled People Against the Cuts and End Deportations. Following recent XR protests, these groups reflected “on the narrative, strategies, tactics and demands of a reinvigorated climate movement in the UK”. The letter sets out a series of powerful “principles and demands”. It also suggests ways to unify and build a “whole movement”. As it states:

The fight for climate justice is the fight of our lives, and we need to do it right.

And another beautifully eloquent letter from John Jordan – a  ZAD (zone à défendre) activist – points to the deep relationships between activism and the state, and the endurance needed for successful protest.

The collaborative letter supports XR and welcomes any mass awareness of “the immense danger ahead of us and a collective will to fight it”. But crucially, it also points out that:

in order to construct a different future, or even to imagine it, we have to understand what this “path” is, and how we arrived at the world as we know it now. “The Truth” of the ecological crisis is that we did not get here by a sequence of small missteps, but were thrust here by powerful forces that drove the distribution of resources of the entire planet and the structure of our societies.

Because as the letter so vitally states, everyone is dominated by existing “economic structures”. And these came from “colonial projects whose sole purpose is the pursuit of domination and profit”. We need to remember that:

For centuries, racism, sexism and classism have been necessary for this system to be upheld, and have shaped the conditions we find ourselves in.

As it points out, for too many people, the impact of living under these conditions is nothing new:

For those of us who are indigenous, working class, black, brown, queer, trans or disabled, the experience of structural violence became part of our birthright.

“The crack of truncheons on our skulls”

Jordan’s letter also supports XR actions. But importantly it notes that any sense of ‘winning’ requires a deeper understanding of the state because:

your victories are a threat to its survival and it turns against you. I know that we are never prepared for the real repression when it comes. Sometimes it comes in the form of criminalisation through media storytelling, sometimes through the crack of truncheons on our skulls.

And he also points out that:

often it comes through the back door, an act of digestion and incorporation, transforming our radical actions into their own words, words that become tools for their greenwashing or electoral sloganeering.

“The root causes of the climate crisis”

On 1 May, parliament voted to declare an “environment and climate emergency”. This is a major, if symbolic, step towards formally recognising the climate catastrophe that the planet faces. But as Jordan notes, parliament declared a climate emergency on the very same day the government approved plans for the controversial third Heathrow airport runway:

the state declares an emergency with one hand and with the other it fuels the very fire which is pushing life to the edge… we can’t let this happen now, it would make the decades of resistance against this piece of climate burning infrastructure worthless and the growing climate rebellion a joke.

Similarly, Wretched of the Earth ask XR not to ignore longstanding “histories of struggle, dignity, victory and resilience”. On a global scale, climate protest must acknowledge the wisdom of “indigenous communities” and work for a future that creates “new worlds free of the violence of capitalism”.

As the letter also notes, “the root causes of the climate crisis” are complex. It’s a crisis that stems from “capitalism, extractivism, racism, sexism, classism, ableism and other systems of oppression”. It also points out that many:

communities have been on fire for a long time and these flames are fanned by our exclusion and silencing.

Extinction Rebellion thanked the police on several occasions for their handling of the protests. But many people have criticised this stance, pointing out that the police force is a violent and institutionally racist organisation. A viral video showed this reality when a Black woman – who had nothing to do with XR – was arrested simply trying to walk through London. And the way that police dealt with XR protestors stands in stark contrast to the brutal arrests of Kurdish hunger strike activists in the same week.

Wretched of the Earth reiterate this point:

Many of us live with the risk of arrest and criminalization. We have to carefully weigh the costs that can be inflicted on us and our communities by a state that is driven to target those who are racialised ahead of those who are white.

The letter explains that although the XR strategy, based around the “primary tactic of being arrested”, is valid, it must be:

underlined by an ongoing analysis of privilege as well as the reality of police and state violence. XR participants should be able to use their privilege to risk arrest, whilst at the same time highlighting the racialised nature of policing.

Wretched of the Earth set out six demands. The groups involved explain that these offer the only viable route to enact real change and highlight the need for social justice. A Green New Deal is vital, but it must be global. It must insist the UK ends “unfair trade deals”. It also argues that ending the arms trade is equally important:

Wars have been created to serve the interests of corporations – the largest arms deals have delivered oil; whilst the world’s largest militaries are the biggest users of petrol.

The demands call for a new approach to financial systems and economic structure. But they also go further, addressing other institutional structures. A viable future must, it proposes, also end “the hostile environment of walls and fences, detention centers and prisons… used against racialised, migrant, and refugee communities”.

These demands go far beyond XRs existing ones. Wretched of the Earth is challenging the very structures that underpin the onslaught of environmental destruction. As its letter explains, the groups involved feel “key aspects” of the XR approach “need to evolve”. Its demands simply offer a “starting point” for “urgently needed” conversations.

“How can our love of life become a love for a place?”

Jordan says he wrote a “letter of warning but also a love letter, or rather a letter about love”. And he asks a vital question:

how can all that energy from Extinction Rebellion shift from the temporary sites of bridges and road blocks and start to take root, to defend a territory. How can our love of life become a love for a place?

As the collaborative letter also states:

We share this reflection from a place of love and solidarity, by groups and networks working with frontline communities, united in the spirit of building a climate justice movement that does not make the poorest in the rich countries pay the price for tackling the climate crisis, and refuses to sacrifice the people of the global South to protect the citizens of the global North.

These letters share vital voices of experience. Climate breakdown affects everyone. And it’s through learning, sharing knowledge and working together that we’ll gain the strength needed to really take action over climate chaos.