Activists across Wales, Scotland and England call for a boycott of holidays in Turkey - Canary 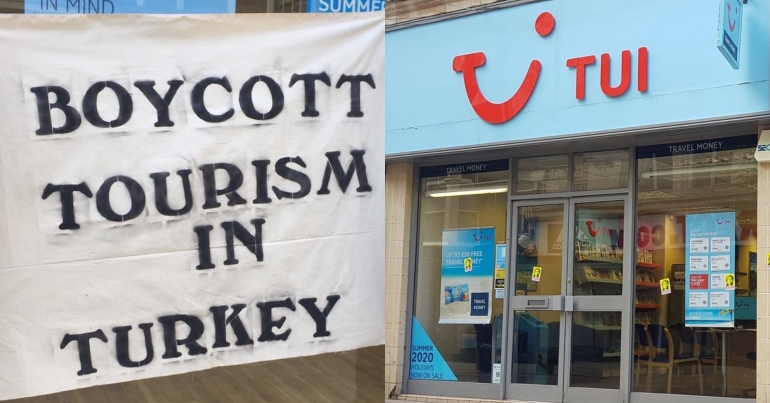 People from all over Wales, Scotland and England held pickets and direct actions targeting travel agents on Saturday 4 May. Their message was simple: ‘Don’t Holiday in Turkey’.

Kurdish activists have repeatedly called for holiday-makers to boycott Turkey in protest at the state’s crimes against Kurdish communities.

The actions have been focused on TUI (formerly Thomson holidays). The company owns or franchises a long list of hotels in Turkey.

Turkey’s pro-government Daily Sabah claimed this week that visitors to Turkey have increased 27% since 2018. If this is true, TUI will be profiting. A financial report released by TUI states that:

our diversified portfolio means we will continue to benefit from growth in demand for Turkey.

The Canary contacted TUI for a comment on the 4 May protests but had not received a reply at the time of publication.

Protesters in Bristol occupied the Broadmead branch of TUI. They were evicted by the police. But they carried on a lively protest outside. 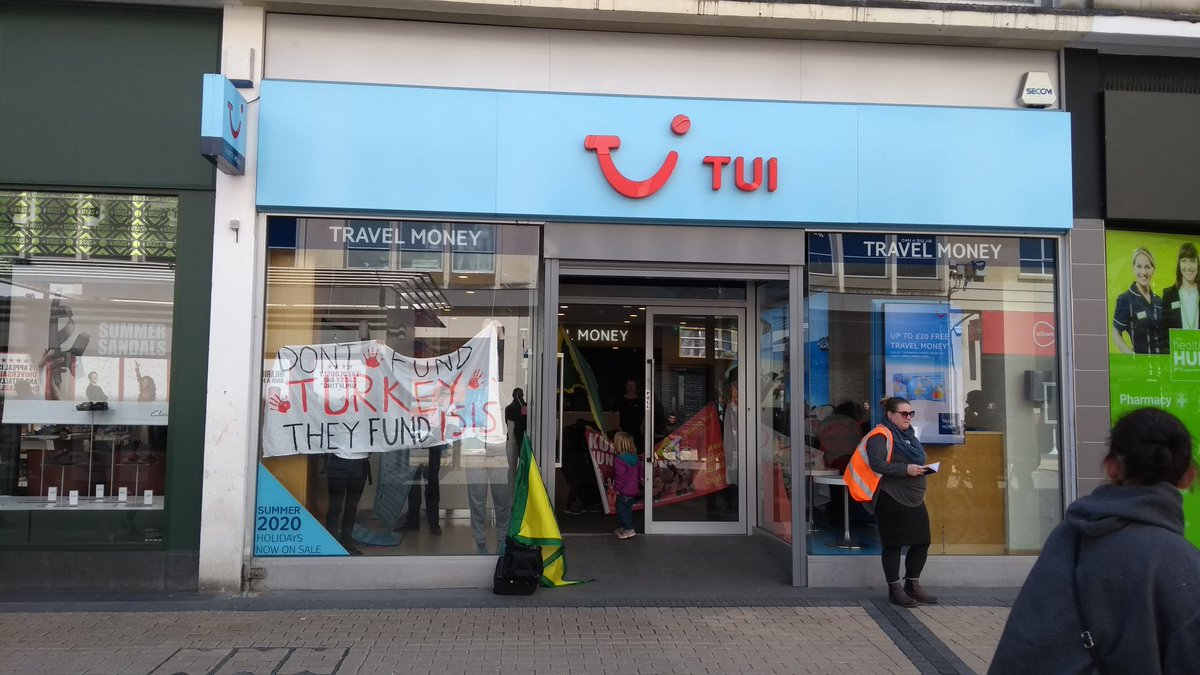 We occupied TUI in Bristol today to protest their support for the Turkish State & in solidarity with İmam Şiş and the #hungerstrike. We call on TUI to stop investing in Turkey & to stop selling Turkish holidays, until Erdogan resumes the peace process & stops funding terror. pic.twitter.com/f9jhThaVKl

Call for boycott actions in support of the hunger strike

According to a press release from Bristol Kurdish Solidarity:

Over 7,000 Kurdish activists are on hunger strike across the world. This action was initiated by Kurdish member of the Turkish Parliament, Leyla Güven, on 7th November 2018. Imam Sis, a 32 year old Kurdish resident of Newport, has been on an indefinite hunger strike since [December] 2018. Their health is rapidly deteriorating. Two of the protesters who occupied TUI today joined the hunger strike in solidarity with Leyla, Imam and the thousands of other hunger strikers…

Every pound spent in Turkey is a bullet to be used against Kurdish people.

End the isolation of Abdullah Öcalan

Sis and Güven are among over 7000 Kurdish hunger strikers. The hunger strikes are demanding an end to the isolation of Abdullah Öcalan, the co-founder of the Kurdistan Worker’s Party (PKK). The PKK has fought for Kurdish freedom and autonomy since the 1970s. Turkey defines the PKK as a ‘terrorist group’. Most Western states have followed suit, as they see Turkey as a key trading partner and NATO ally.

Öcalan has been held by Turkey since 1999 and has been denied access to his lawyers since 2011. Öcalan’s political ideas inspired the 2012 Rojava revolution in northern Syria.

Activists in Barry flyposted branches of TUI with posters in support of the boycott. The posters included photographs of Kurdish hunger striker Imam Sis.

Several demonstrations were held at TUI branches in Cardiff. The windows of TUI were covered in pictures of Sis and pro hunger striker graffiti appeared around the city. 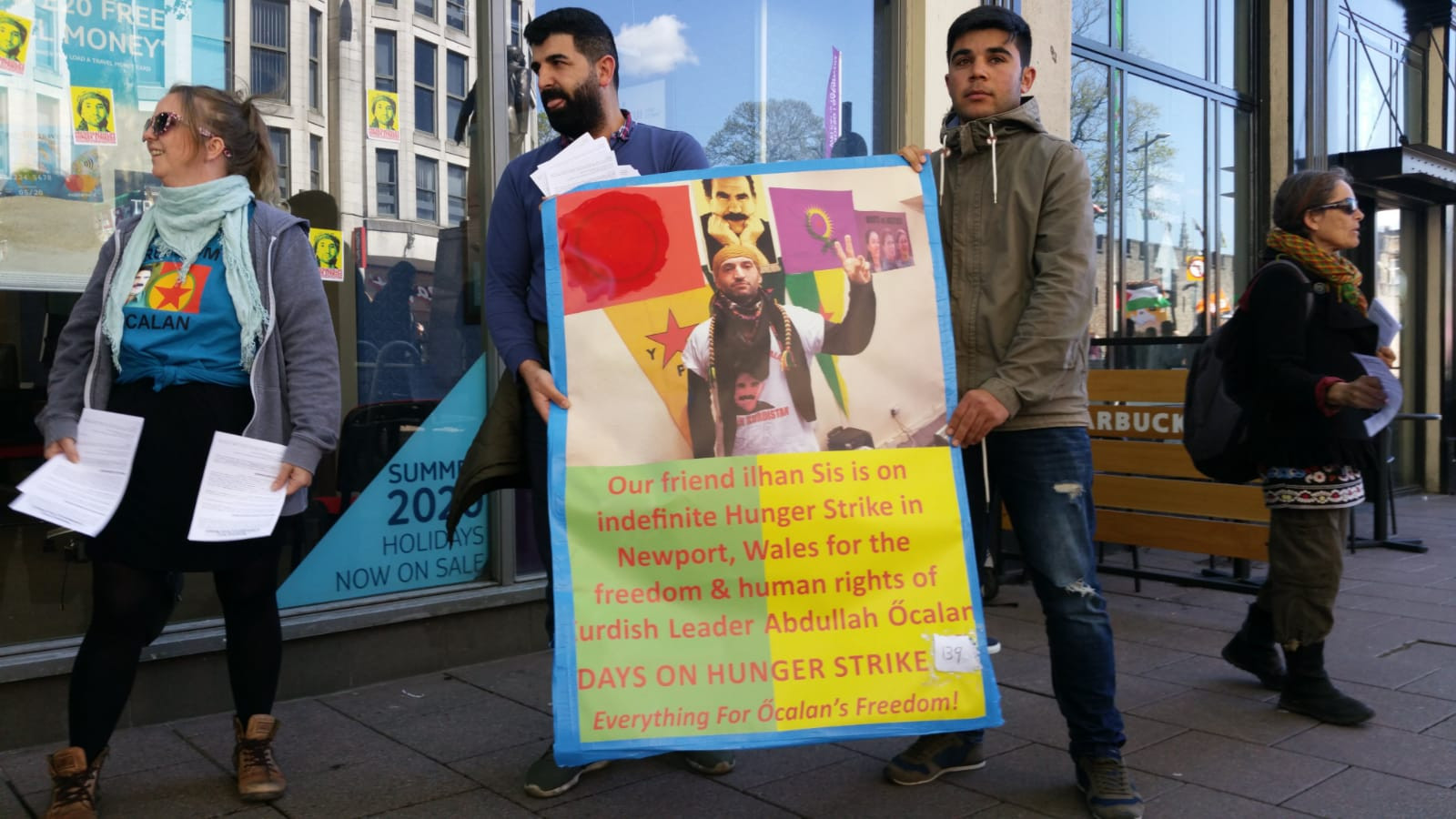 A lively demonstration was held in Hull. 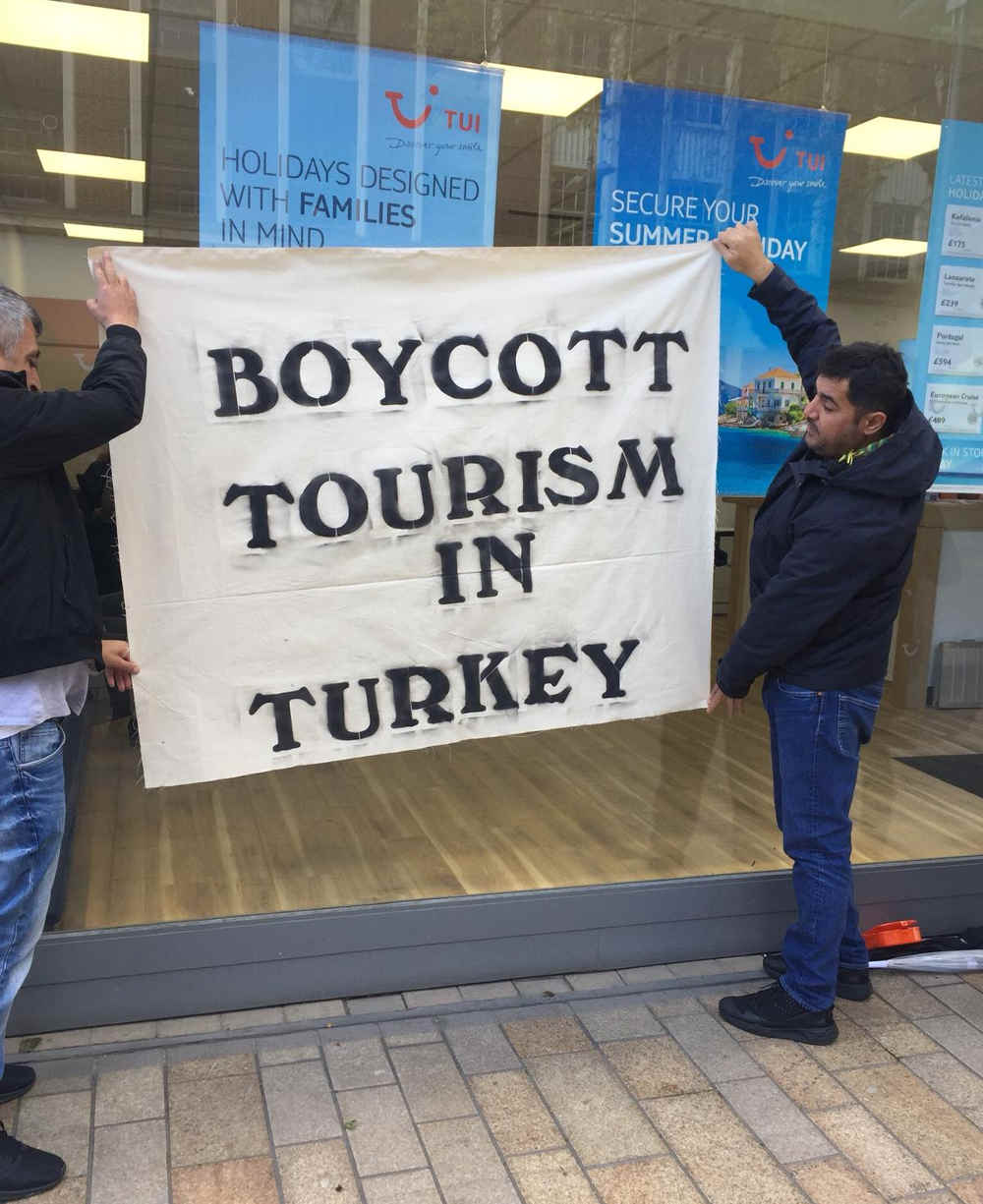 And a picket was also held in Brighton. 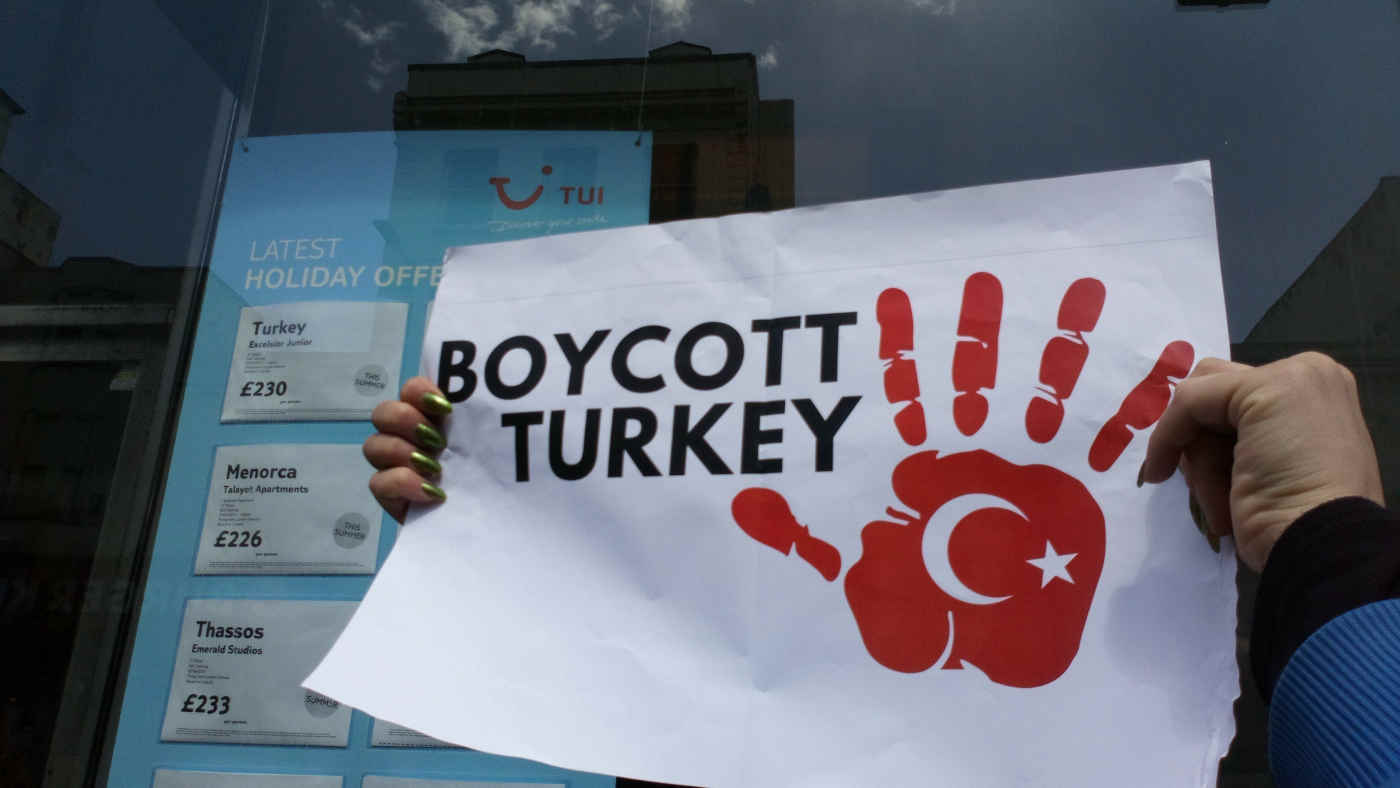 Further demonstrations are planned next week in Liverpool and Bangor.

“We are going to persist”

In light of the 15 prisoners on ‘death fast’ in Turkish prison and Imam’s condition we need to escalate our actions. Now we are targeting Turkey economically with this campaign for TUI to boycott holidays in Turkey. We are going to persist until the Committee for the Prevention of Torture reopens its investigation [into the imprisonment of Öcalan] or the Turkish government allows Öcalan visits from his family and his lawyers.

We are asking people to boycott holidays in Turkey so that they are not supporting the Turkish regime which oppresses the Kurds, locks up journalists and commits atrocities against civilians.

Today’s protests mark a new departure for the Boycott Turkey campaign. And a new level of cooperation by activists around the country. The condition of the hunger strikers is critical. It is high time that the UK public views holidays in Turkey as just as unacceptable as a vacation in Israel.

Featured image and all other images via a press release from Kurdish Solidarity Cymru.