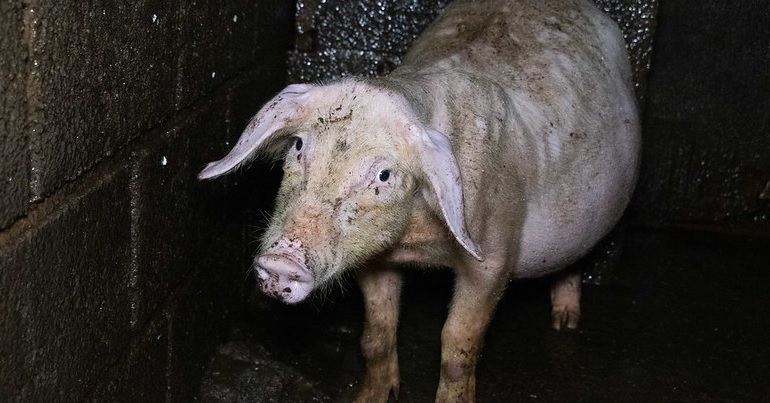 The charity Viva! has released harrowing findings from a months-long investigation into a Leicestershire pig farm. The charity’s undercover investigators documented shocking conditions and welfare standards which it says occurred at Flat House pig farm in the county.

The food standards scheme Red Tractor terminated the farm’s certification following the investigation. The RSPCA has also referred an incident at the farm to Trading Standards.

But these are not the first allegations of neglect, cruelty, and unsanitary conditions to hit the factory farming industry, nor will they be the last. Viva! founder Juliet Gellatley argues that “these factory farms are the norm in the UK – this is who the nation entrusts”.

Viva!’s investigators claim they witnessed numerous pigs with serious illnesses on the farm. The charity said these included:

bleeding hernias, prolapses, deformed trotters, rectal strictures and pot bellies. Other animals were covered in lacerations and grotesque bites, injuries inflicted on them by other pigs who are driven to insanity by the barren environment.

Furthermore, the investigators say they witnessed workers at the farm ‘knocking’ piglets. Viva! explained that this means “killing them by slamming their tiny heads onto the bars of their mother’s metal cage”. The charity says after knocking piglets, and “dumping” their bodies aside, one worker exclaimed ““I f****** hate doing this!”.

Viva! also released footage to back up its claims:

We are appalled by the images in the footage. Protecting animal health and welfare is one of our top priorities. Red Tractor requires all members to meet every standard, every day and take any breaches of these standards seriously. Last month we immediately launched an investigation and the farm’s membership of the scheme has since been terminated.

Like other standards schemes, a certification from Red Tractor is supposed to give people confidence that meat carrying its logo meets certain specifications. Specifically, Red Tractor approved meat is supposed to be “traceable, safe and farmed with care”. On its website, it tells consumers:

Look for the Red Tractor logo and you can be safe in the knowledge that our inspectors have checked and documented every step of the food journey from farm to pack. That’s 60,000 checks a year. In advance. Just for you

Viva!’s investigation spanned a number of months, from March to July of this year. The Canary asked Red Tractor how many checks its inspectors had done of Flat House farm during that period. It received no response.

The farm, however, insists it has “done nothing wrong”, according to the Daily Mail. The tabloid wrote that a farm source said “the video was falsified and the allegations were fake”. The Daily Mail also reported that the farm claimed the RSPCA was “happy” with a recent spot check it carried out.

The RSPCA challenged this. It says it has referred an incident at the farm to Trading Standards. A spokesperson shared a statement with The Canary which they said the organisation made on 11 August. It read:

An officer attended the farm on 29 July following a report made to our emergency line about three dead pigs. The RSPCA has looked into this and this incident has been referred to Trading Standards to investigate. We are happy to assist them if required

The Canary contacted Trading Standards to ask for an update on its progress. No response was received by the time of publication.

Gellatley says Flat House farm is “one of the very worst pig farms I’ve investigated in Viva!’s 26 years”. But it’s certainly not the only farm to face allegations of this kind. Campaign groups have documented numerous cases of neglect and cruelty involving farm animals in the UK. Thanks to their efforts in securing details of the abuses, a number of the incidents have resulted in convictions. Meanwhile, charities regularly point to the abuse entrenched in what are deemed ‘acceptable’ farming practices, such as confining farm animals to cages for much of their existence and forcing them to endure brutal lengthy journeys only to be killed once they reach their destination.

Of course, the UK is not alone in treating farm animals this way. Abuse on farms, whether it’s considered acceptable or unacceptable, is a global phenomenon. As US-based animal advocate John Oberg told The Canary in response to Viva!’s investigation:

Animal agriculture operates with near impunity and barely any oversight, so farm animals constantly fall victim to neglect and cruelty that would land a farmer in prison if they treated a cat or dog similarly. Viewers must know that exposés like this one are just the tip of the iceberg. Simply hoping that farm animals live decent lives is a fruitless endeavour where farm animals are the victims.

In short, rearing and killing farm animals on an industrial scale, as the world is currently doing, is an abusive practice. The systems we have in place to mass ‘produce’ and destroy living beings aren’t, by any stretch of the imagination, humane. And the commodification of those living beings – viewing them as mere objects on a production line – clearly brings out the worst in many people, as the numerous examples of appalling violence and brutality towards farm animals show.

No wonder veganism is on the rise. It’s not surprising that an increasing amount of people ‘f****** hate’ being complicit in this.