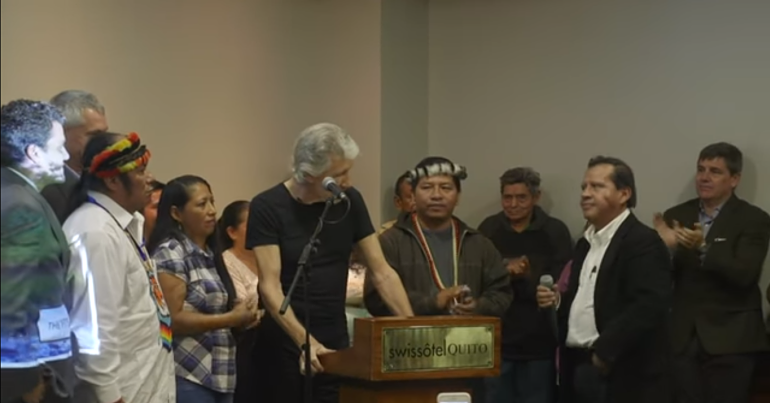 Taking a break from his tour of Latin America, Roger Waters visited indigenous communities in Ecuador’s Amazonian province of Sucumbíos to denounce US oil giant Chevron. The communities are in a decades-old battle with oil corporations accused of causing massive environmental destruction. The area in question, Lago Agrio, is now being called the “Amazon’s Chernobyl” after “the deliberate dumping of billions of gallons of toxic waste on… ancestral lands”.

The former Pink Floyd musician visited Ecuador during his Us + Them tour. But the country’s Civil Aviation Authority initially obstructed the musician from travelling to Lago Agrio. “Certain people did not want me to visit,” claimed Waters.

After visiting the site, Waters said in an interview:

The sad and sickening thing about the American empire is that they’ve fucked up so many other places – as did the British… as do all colonial empires, they really screw things up. They don’t help anybody to progress or go anywhere.

During the press conference, he claimed:

So happy to be in beautiful Ecuador, spent yesterday visiting the wonderfully hospitable indigenous people. I am deeply moved by their predicament in the face of Chevron corporations’ deadly pollution of their rainforest home. pic.twitter.com/bEhTxedvjQ

In 2010, the Amazon Defense Coalition’s Karen Hinton estimated that:

almost 10,000 people in Ecuador face a significant risk of contracting cancer in the coming decades due to Chevron’s refusal to clean up the billions of gallons of oil waste it dumped into the rain forest.

A recent study, meanwhile, showed that “the rate of cancer is three times greater than the national average”.

And in July 2018, Ecuador’s Constitutional Court ruled that Chevron pay US$9.5bn “for the repair and remediation of social and environmental damage that… were a result of oil company operations”.

The ruling, however, was mired in allegations of fraud – and Chevron continues to deny any wrongdoing. The International Criminal Court, moreover, ruled against Ecuador’s US$9.5bn judgment.

Waters is no stranger to activism; and his latest tour has been no different.

In Brazil, he rallied against recently elected president Jair Bolsonaro, and he demanded the Ecuadorean government “protect” Julian Assange. If not, he warned, “the United States, the United Kingdom and others” will kill him.

Ultimately, Waters’ message of solidarity to Ecuador’s affected communities channelled the message of his tour. It’s us and them – and when they win, the result is total environmental catastrophe.

Featured image via screengrab via afpes