Unlike Theresa May, the Irish prime minister supports children on climate strike - Canary 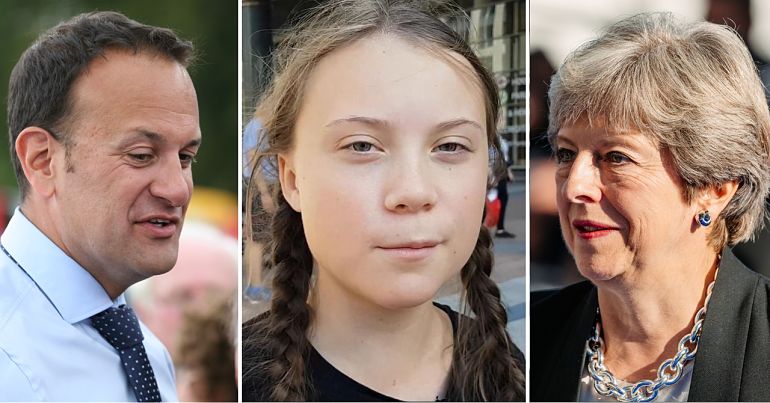 The Irish prime minister, Leo Varadkar, has come out in support of student climate strikes. He made the comments in the Irish parliament on 5 March. Paul Murphy, of the left-wing alliance Solidarity – People Before Profit, asked Varadkar if he will “listen” to students who will strike on 15 March. Varadkar responded saying the strike “is good” and “is welcome”.

The prime minister went further in his comments. Greta Thunberg and students “are standing up to adults”, he said. She and others, he argued:

They are children, pupils and students telling all of the adults in all parties to get their act together and do more about climate change because it is their future that is in jeopardy.

Murphy then said students now had a “green light to walk out” of their classes on 15 March. But many members of parliament were not happy with this suggestion and interrupted him.

WATCH: @campaignforleo says he's "inspired and enthused" at school pupils planning to strike on March 15 on climate change, "putting it up to all of us …to do more", responding to @paulmurphy_TD who says pupils should take this as "green light to walk out" over climate inaction pic.twitter.com/Vefw8Ma9i0

Varadkar made the comments during Leader’s Questions. Murphy pointed to the students going on strike compared to “the inaction of the world’s leaders”. The difference, he said, “could not be starker”. What’s more, he pointed out that the prime minister is aware of climate change. It’s just that he does “not want to do anything about it”.

Murphy called for an alternative:

A mass movement on climate change is needed and the school students should be joined by others, in particular the trade unions, to demand investment in green jobs and a centrally-based eco-socialist programme to take control of the economy out of the hands of the polluters and profiteers and to place it under the democratic control of the public to enable the rapid just transition we need.

Varadkar’s support of striking students is in contrast to Theresa May. She recently scolded children in the UK for taking part in a climate strike. Her spokesperson told the students the climate strikes are a “disruption” for teachers. This, they said:

increases teachers’ workloads and wastes lesson time that teachers have carefully prepared for.

Varadkar made his comments as an Irish NGO published a new report on Ireland’s use of renewable energy. According to the Sustainable Energy Authority of Ireland (SEAI), Ireland will fail to meet its 2020 targets for renewable energy under his government. This, the SEAI says, puts Ireland in 26th place out of 28 EU countries for its progress towards meeting these goals.