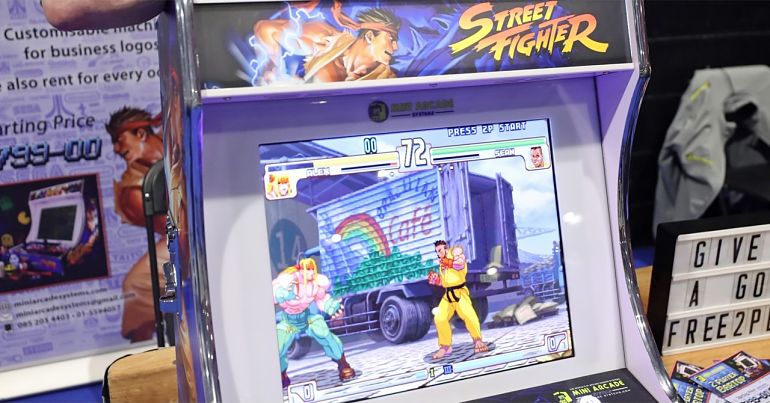 A single parent from Dublin who built a retro arcade machine to try and connect with his teenage son has turned the gaming machine into a business.

Aidan Deering said he was losing his then 13-year-old son to digital devices as he spent hours playing on his mobile phone and home game consoles.

After struggling to build a relationship with Sean, the Dublin father came up with the idea to build a two-player traditional arcade machine.

He said: “I was a single parent and I was trying to connect with Sean, who was at the stage where he wanted to be with his friends and play his own games.

“I didn’t have much of a connection with him, so I sat up four hours every night for about four months to make the machine.

“I used to play the video games as a kid and always loved it, so I thought it would be really good to do.

“It took a few months to build and the first time we played together it brought out the competitiveness in the both of us and straight away there was a connection.

“We played it every day for a week or two and it made our relationship a lot stronger.

“As the machine is a two-player game, it means the users aren’t always on their own.

“We are losing a generation through tablets and digital devices, and I thought it could work as a business as I’m not the only parent to struggle with a teenager.

“I knew I was losing him because he was getting to that age and I wanted to get him back.”

Mr Deering set up Mini Arcade Rental Systems and travels across the country to gaming shows with the help of 16-year-old Sean.

He now sells the bespoke arcade machines and also rents them for social events.

“A lot of kids love the arcade games. It’s funny watching them use the joystick as they are so used to the touch screens,” Mr Deering added.

“You can see parents with their kids laughing and joking as they play the games together.

“It’s something for parents and children to do together and anyone can rent it out for communions and parties.

“I’ve sold machines to a few celebrities like Nick Frost, Rob Beckett and Conor McGregor as well as a few others.

“It’s really about the kids and the relationships between them and the parents. It also gives parents the chance to beat their children.”

The machines sell for around 1,000 euro (£895) with cheaper options also available.