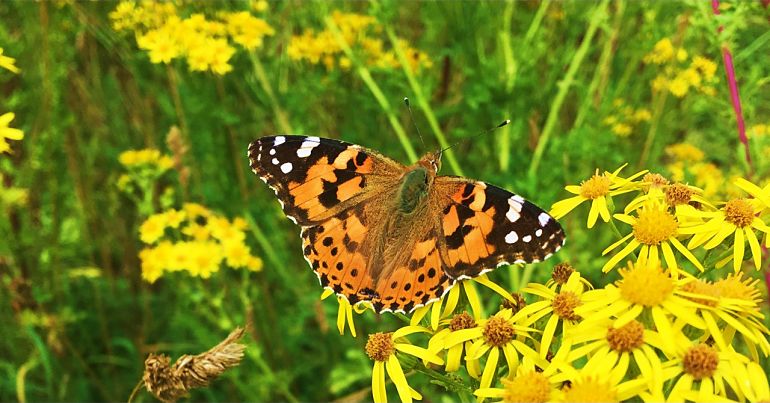 Tens of thousands of painted lady butterflies were spotted over two days in July thanks to a migration “influx” in the UK, according to environmental charity Butterfly Conservation.

The butterfly is a common immigrant to the UK from the continent each summer, but around once every 10 years there is a bumper year, when millions arrive together.

As the species makes its migration to the UK, the charity said that over 30,000 painted lady butterflies were spotted in two days at the end of July.

Nature lovers in the UK have spotted the butterflies in their gardens and local parks, and have shared photos and videos of the migration.

Butterfly Conservation is asking for people in the UK to look out for and record species of butterflies across the country as part of this year’s Big Butterfly Count.

The count runs until August 11 and has already seen high numbers of painted lady butterflies.

Zoe Randle, senior surveys officer at Butterfly Conservation, told PA: “Over 30,000 [painted lady butterflies] were seen in two days at the end of July, so there’s a huge influx.

“The warm weather helps them spread.”

Painted ladies are migrating from parts of northern Africa and the Middle East, with high numbers already recorded in parts of the UK.

The last mass immigration took place in 2008, when around 11 million painted ladies migrated to the UK.

Randle said: “This could be a record year for them. In just two days last week, people across the UK counted more than 30,000 painted lady butterflies and thousands more have been seen since then.”

Butterfly Conservation also asked for people to look out for the common blue butterfly, which has been low in numbers for the last 40 years.

“However, numbers of the first brood which emerged in June were slightly down on last year, so it will be interesting to see how the second brood emerging in August will respond to the heatwave.

“It would really help us if people could get outside and look for this butterfly, so we can see if its fortunes really have turned around or if the common blue still needs our help.”

Randle said: “They do have really, really good years… so far 50,000 counts have been done and 30,000 painted ladies were seen across the UK towards the end of last month.

“It doesn’t happen every year.”

The butterfly count runs from July 19 to August 11, and anybody can get involved by finding a sunny spot in the UK, spending 15 minutes counting the butterflies they see, then submitting sightings online at www.bigbutterflycount.org or via the free Big Butterfly Count app.