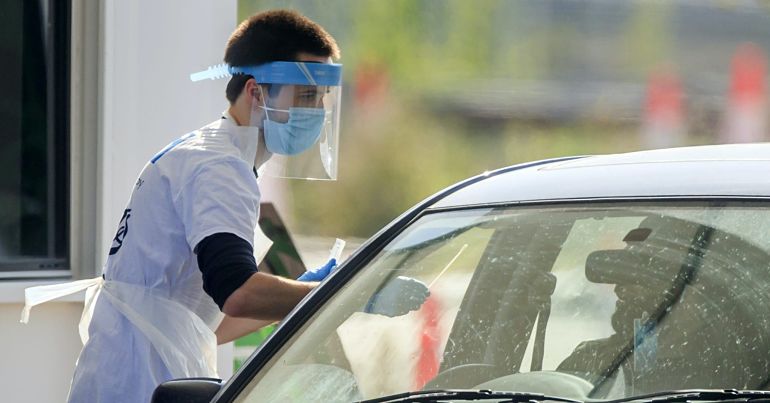 The government has defended its test and trace programme after it was criticised as nowhere near “world-beating”.

Labour said there were “growing concerns” about outsourcing giant Serco’s role in the programme amid reports call centre contact tracers were being “paid to watch Netflix”.

The party also said the service was nowhere near “world-beating” and was unable to tackle local outbreaks.

The government has announced it was strengthening regional test-and-trace powers in England while axing 6,000 national contract tracers.

It means people who have been in contact with confirmed coronavirus (Covid-19) cases may get a knock on their door if tracers are unable to reach them over the phone.

He said: “We’re reducing the number of contact tracers nationally through that Serco contract from 18,000 to 12,000 and throughout we have worked closely with local public health officials, but we are strengthening further that relationship so you will still have that national calling, that national push, to make contact.

“But for those hard to reach or for those people who can’t be contacted then you’ve got this door-to-door approach as well.”

Labour said the current contract with Serco was “ineffective and not fit for purpose”, and the service should be led by directors of public health and supported by primary care and NHS labs.

Shadow health minister Justin Madders added: “Labour has been calling for a locally-led contact tracing system for months – it’s welcome that local authorities are now finally being given additional support to tackle the virus in their areas.

“But it’s clear Boris Johnson’s £10bn centralised contact tracing system is nowhere near ‘world-beating’ as he claims and the system is unable to fight local outbreaks successfully.”

Public health officials have also said a joint national and local approach to testing and tracing needs “a change in flow of resources” to help councils cover the costs of trying to reach people.

When asked if he would cancel the current test and trace contract and give money to local councils, Argar said the government had already given them billions of pounds.

The latest official figures show that in the seven days to 29 July, 72.4% of people identified as being in contact with an infected person were reached and asked to self-isolate by NHS Test and Trace, a drop from 76.2% the previous week.

It said the overall percentage of contacts reached was declining because contacts relating to local outbreaks were being managed by local health protection teams.

Prime minister Boris Johnson told MPs on 20 May the test-and-trace operation would be “world-beating” and in place by 1 June.

The criticism over the test-and-trace service comes as new data from the Office for National Statistics (ONS) showed around 730,000 UK workers have been removed from the payrolls of British companies since March when the coronavirus lockdown began.

The ONS said that employment rates have continued to decline in the last month as another 81,000 jobs fell off payrolls across the country.

The UK has 313,390 cases according to the university, putting it 12th on the list, just behind Spain.

Government figures showed that in the 24 hours up to 9am on 9 August, the UK recorded more than 1,000 new coronavirus cases in a day for the first time since late June.

This breached the ceiling that the government’s Joint Biosecurity Centre said was acceptable to avoid “flare-ups” of Covid-19, according to Sage documents.

Meanwhile, scientists at Public Health England (PHE) have warned secondary school pupils are as likely to transmit coronavirus as easily as adults.

Education secretary Gavin Williamson has said PHE findings due to be published later this year showed there was little risk from the government’s plans to reopen schools in England in September.

However, the Times reported that while there was little risk from primary schools, researchers who had worked on the study were unhappy with the way their findings, which have not yet been fully analysed, had been used by ministers.

The report is likely to heighten concerns among teaching unions concerned about whether schools can safely return in the way ministers want.

Johnson also announced that NHS trusts across England will receive £300m to upgrade facilities ahead of the winter amid fears of a second wave of coronavirus.

The prime minister said the additional cash would enable hospitals to maintain essential services and reduce the risk of Covid-19 infection during the coming months.

The funding comes from a £1.5bn capital building allocation for the NHS set out by Johnson in June.

In all, 117 trusts will benefit from the additional funding which could be used by hospitals to increase A&E capacity, with more treatment cubicles and expanded waiting areas to ease overcrowding and improve infection control.

It could also enable hospitals to increase the provision of same-day emergency care and improve patient flows to help them to better respond to winter pressures and the risks of fresh coronavirus outbreaks.

Officials said the projects would all be completed by the start of 2021 so hospitals would benefit from the upgrades during the peak months of winter.