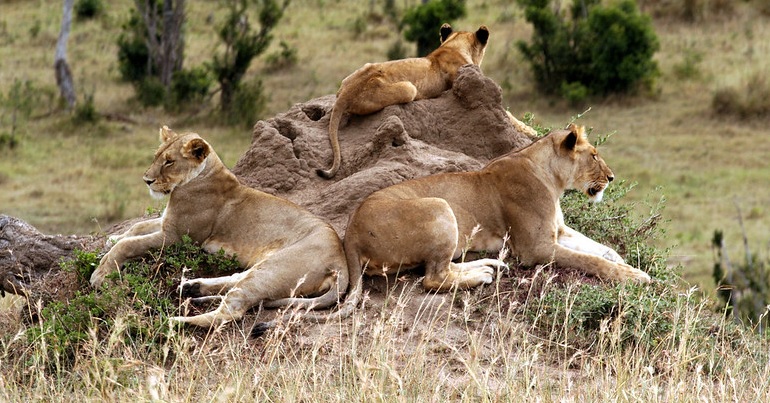 It’s World Lion Day on 10 August. Ahead of the global celebration, Kenya released some brilliant news about its own population of lions. As wildlife charity Born Free Foundation reported, the country has announced an estimated 25% increase in lion numbers.

Here's some fantastic news to give you a real #FridayFeeling. Lion numbers are up 25% to 2,489 in Kenya, according to a new estimate released by the Kenyan government. @willtravers said: "I believe this is a sign for cautious optimism.” Read more: https://t.co/azFBN3r0FE pic.twitter.com/dwpOvay6Fj

The Kenyan government says there’s an estimated 2,489 lions living in Kenya, an increase of almost 500 since the last figure of around 2,000. That might not sound like a big increase for a species that numbered 200,000 across Africa just a century ago. But given continent-wide estimates currently range between 13,000-20,000, 500 more of them in Kenya is something to shout about.

Kenya released the figures in a new decade-long action plan for the recovery of lion and spotted hyena populations. As already mentioned, the lion figures are an estimate. They are the result of a national survey which began in August 2018. The survey was due to conclude in June, but insecurity in certain areas and the coronavirus (Covid-19) pandemic stalled progress. So wardens and researchers provided “guess estimates” in a number of locations.

Born Free’s co-founder and executive president Will Travers welcomed the increase. He said:

Since 2010, conservationists have estimated wild lions in Kenya to number 2,000. This new figure indicates that all the incredible effort that has been put into lion conservation by so many – Kenya Wildlife Service, Born Free, Big Life, Ewaso Lions, Northern Rangelands Trust and many more, including local communities – is paying off. I believe this is a sign for cautious optimism and we may yet drag wild lions back from the brink. Inspired by this, we must do more.

Kenya is already planning to “do more”. Overall, its new plan aims to “sustain viable populations of lions and spotted hyenas in healthy ecosystems as a world heritage valued by the people of Kenya”. Its plan encompasses both species because it says they face similar threats. As the State Department of Wildlife’s principal secretary Fred Segor explains:

both species face widespread decline across their range due to human-wildlife conflict, wildlife disease, habitat loss and general land use changes across Kenya.

A timely but tragic illustration of how critical the plan is – particularly in terms of fostering better co-existence between humans and wildlife – happened on and around World Lion Day. Wildfires blazed through territories in Kenya where lions, hyenas and countless other species roam. The Sheldrick Wildlife Trust, a Kenyan charity which is helping to fight the fires, said people likely started them in “retaliation against the Kenya Wildlife Service or to clear grazing land for cattle”.

Hellish scenes from Tsavo West National Park over the past 2 days as our field teams help fight more fires, this time along the Maktau-Taveta Rd to the South of Murka. Our teams are STILL battling the flames today: https://t.co/gLGSm6rBg2 pic.twitter.com/ums23BcyAl

In the video, he argued that it’s not just Kenya that needs wildlife, but the whole world. And that’s true; wildlife helps maintain ecological systems on which all life depends. But, as Kenya’s plan identifies, the world’s wildlife species also need something from humans. They need us to change course: to stop trading them for profit, to cease killing them for ‘fun’, to end the incessant expansion that makes it impossible for them to find a place to call home, and to desist from the path of endless ‘growth’ that is heating the planet with disastrous consequences.

So let’s celebrate lions on their designated day. But let’s also back up our cheers with action. And let’s commit ourselves to the sort of necessary and lasting change that will secure a viable future – for the king of the jungle and all Earth’s beings, including humankind.