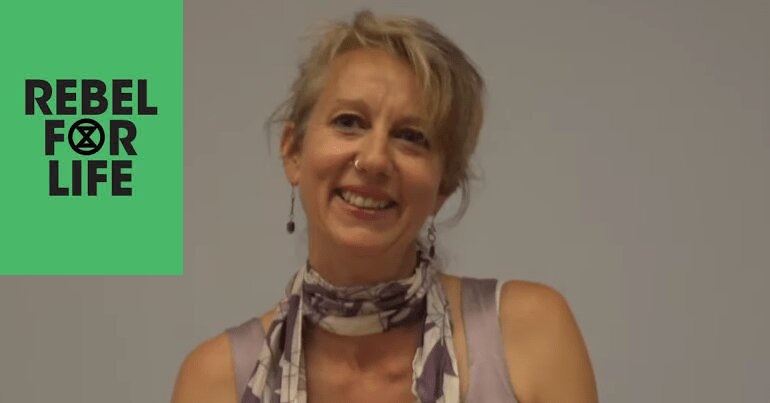 In an interview with The Canary, Extinction Rebellion (XR) co-founder Gail Bradbrook tackled the allegation that XR, which is spearheading the climate movement, isn’t fundamentally challenging free market capitalism.

The Canary sat down with Bradbrook after her speech at Shambala festival 2019 to explore this and other areas relevant to the movement. Her speech appeared to emphasise individual responsibility over governmental change. When she was challenged on this, Bradbrook said:

When it comes to climate catastrophe, there are clearly major issues with the nexus of corporate government power. 100 corporations are responsible for 71% of global fossil fuel emissions. And the Conservative government has been overriding the democratic will of local communities by rolling out fracking.

But Bradbook argued that political power actually lies outside of government:

The point I’m making is one where political power lies. So if you think that political power lies not in your own agency then you’ve sort of semi given it away. So there’s political theorists like Hannah Ardent and others who say the power lies in the collective… Where I think we have to focus ourselves is on each other and getting the rebellion organised. When you sort of focus on them and you go like… ‘it’s their problem’… I’m talking about a piece of psychology more than a piece of analysis. Where you’re giving your power to something else.

While emphasising Extinction Rebellion’s approach, she did not mention a Green New Deal, which is state-led transformation of the economy to a renewable energy system.

But Bradbrook emphasised that Extinction Rebellion does critique the neoliberal, free market approach:

Extinction Rebellion…if you look at the ‘rising up’ documentation behind it… we talk about… the economy, and the political system and the media, they’re like the three pillars holding things in place… how do you make the change?…Mass participation, civil disobedience. What’s in the way of that?… Do you and I feel like we can work together or are we just going to have meetings that fall to pieces…?

In its aims, Extinction Rebellion writes that our political system:

has been captured by corporate and private interests and the media is owned by wealthy billionaires who use their power to systematically undermine informed public debate.

Transformation of the political system, society and economy to ones which maximise well-being and minimizes harm. The existing political and economic system is set to destroy civilisation and much if not all life on earth if allowed to continue.

It seems Extinction Rebellion is critical of the corporate system but is trying to refine its messaging in a way where it believes it will reach the most people. Bradbrook also said:

It’s really important that people hold us to account… We were so determined not to look like a certain version of progressive left that is… super right on… but everybody else is just like ‘I’m not part of that, it doesn’t speak to me’. We’re trying to build a mass social movement so you’ve got to message in a way that’s going to work for other people… But I think we went too far the other way to be honest.

Instead of trying to elect a Labour government and deliver a Green New Deal, Extinction Rebellion focuses on direct action. What’s unarguable is that the organisation has forced the oncoming climate catastrophe onto the agenda. And it deserves major props for that.