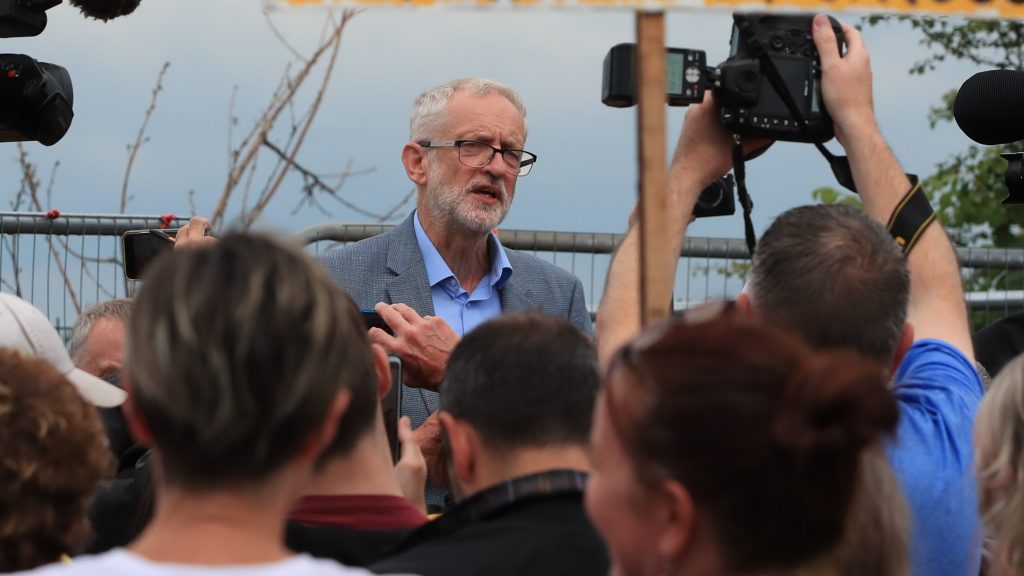 On 30 July, Labour leader Jeremy Corbyn continued his tour around Britain by meeting protesters at the gates of a shale gas exploration site in Lancashire. Speaking to around a hundred activists at the Preston New Road site near Blackpool, Corbyn promised that his party will ban fracking and launch a “green industrial revolution” if it wins the next general election.

The site is the UK’s only shale exploration operation and is controversial in Lancashire after numerous earth tremors were blamed on the process. There has also been a “large police presence” there to monitor protesters.

WATCH: Labour Leader @jeremycorbyn told us why he’s having a cup of tea with anti #fracking campaigners at the Preston New Road site pic.twitter.com/nUmqElLbeT

Corbyn said fracking, a method of shale gas extraction through hydraulic fracturing underground, would have a damaging effect on the environment. He also stated that he would be “happy to talk” to Cuadrilla – the firm responsible for fracking at Preston New Road – “because I do believe what they are doing is dangerous to our environment”. But he stressed:

“A green industrial revolution will create around 400,000 jobs”

After speaking to demonstrators in a hut where they organise round-the-clock monitoring of the fracking activities, Corbyn stepped onto a bench to give a speech to protesters. He said:

I want to see a green industrial revolution in Britain.

I want to see sustainability. We cannot go on with this level of CO2 emissions and global warming, otherwise we are all damaged if not doomed.

We have a short window, as a people, to reduce CO2 emissions, to prevent global warming beyond 1.5C, in order to protect the planet.

I want to say well done everyone in Lancashire that opposed fracking here, as in Derbyshire and other places, in Sussex, and the way in which you have made sure the issue is kept alive.

The Tory-led government is in the pockets of fossil-fuel corporations. Corbyn isn’t.

Lancashire County Council did its best and then the whole legal process and Sajid Javid intervened.

Well a Labour government would intervene again and we would ban fracking all across the UK.

Earlier in the day, Corbyn had told the Conservative-led government to stop “bending the knee” to fossil-fuel companies:

Instead of bending the knee to a few corporations who profit from extracting fossil fuels from the ground, we need to change course now. https://t.co/K3gRJZCA66

Corbyn has been travelling around Britain in recent weeks, as one Twitter user has been highlighting:

As July 2019 comes to an end let’s look back on the Jeremy Corbyn tour. 3,300km across 11 events. Corporate Media says he’s hiding in his bunkers. Incorrect, Chums. He bypassed you lot to speak to real people, directly. pic.twitter.com/Psx8USRLOu

We are already the most unequal country in western Europe. That is going to get even worse thanks to Boris Johnson and his hard-right government.

There is an alternative. Things will be very different indeed under Labour. pic.twitter.com/8s6sTXqLxh

Boris Johnson, meanwhile, has met with boos and protests from Wales to Scotland in his first days as prime minister.

Mainstream journalists may still be intent on asking Corbyn ‘strange questions’, but he seems determined to keep campaigning for a brighter future:

Corbyn travels 3,300km in 3 weeks, speaks at 11 rallies & announces 27 new policies. Here is the question Corporate Media had to ask him? Clear evidence of bias. pic.twitter.com/l7NdKyZNjd

The mainstream media may not see it or report it, but change is coming. And we all have a part to play in making that happen.