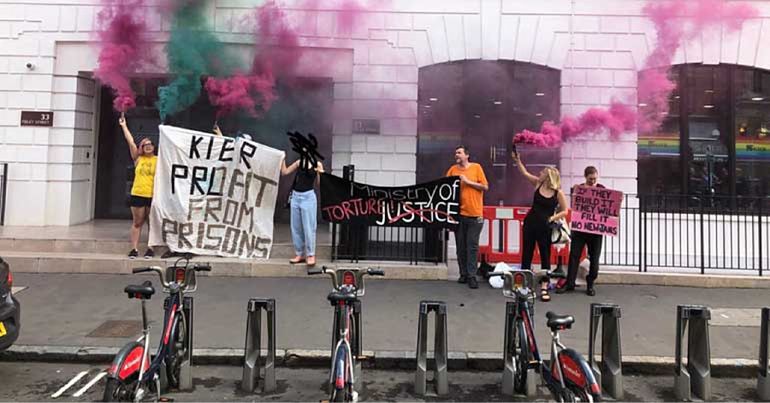 Campaigners have occupied the lobby of construction company Kier, protesting against the building of a new prison. They demanded Kier redirect its money towards rebuilding communities. And they also called for the Ministry of Justice to reduce the prison population.

On 27 July, members of Community Action on Prison Expansion (CAPE) held a demonstration outside Kier’s head office in London. The construction company is the main contractor for HMP Wellingborough, a new ‘mega-prison’ expected to house 1,680 inmates. HMP Wellingborough is part of the government’s plan for six new male prisons that will create up to 10,000 new places in the prison estate. The plan also includes five female community prisons.

The government said this is to create a “less crowded, better organised, and… fit for purpose” system. But CAPE said in a press release on the 27 July action that the six mega-prisons are the “biggest prison expansion project in generations“. And it said the government should tackle overcrowding by “reducing the prison population” rather than expanding it. As a result, the protesters at Kier’s offices demanded the company stop building HMP Wellingborough and instead “direct [its] resources towards rebuilding local communities”

Protesters held banners that said “Kier profit from prisons” and “If they build it they will fill it – no new jails”. CAPE later moved inside the building and occupied the lobby. The group reported on its Facebook page that “Kier weren’t happy” to see the protesters.

Construction company Mace, which was appointed to oversee the mega-prisons project, said the government is investing £1.3bn into expanding the prison estate. This taxpayer money will be handed over to private companies such as Mace and Kier. HMP Wellingborough itself is expected to cost around £253m and be finished in autumn 2021. CAPE said Kier is expected to receive £143m of this.

while private companies will make millions building new prisons, they do so while the British public is consumed with concerns about post-Brexit food shortages, lack of social housing, and a dwindling number of available refuges for domestic violence survivors.

HMP Wellingborough is a key project for a company that’s in major financial difficulty. But several of the mega-prisons have already been abandoned before building began. Plans for a prison in Port Talbot, Wales, for example, were dropped after “strong objections” from the community. This means Kier could be in an unstable position with HMP Wellingborough.

While their precarious financial state means they will likely cling onto contracts, they cannot afford to lose future business. Pressuring public institutions like universities or local councils into refusing Kier contracts could create a domino affect. Diverse campaigns from anti-prison to anti-aviation expansion could work in coalitions and build power across movements to disrupt, delay and stop the oppressive projects that Kier so happily profit from.

Prison campaigners across the country believe expanding the prison estate is a bad idea. Prison reform charity the Howard League points to the lack of money and resources to manage growing numbers of inmates properly. And abolitionists such as CAPE oppose prisons on a matter of principle, believing they cause more harm than good.

Expanding a system that even a commons select committee described as “inefficient, ineffective and unsustainable” will end in disaster. And ultimately, the ones most harmed by a failing prison system are the inmates themselves and their loved ones. Meanwhile, companies such as Kier will reap millions in profit. CAPE’s work to raise awareness and target the bodies most responsible is essential work we should support.