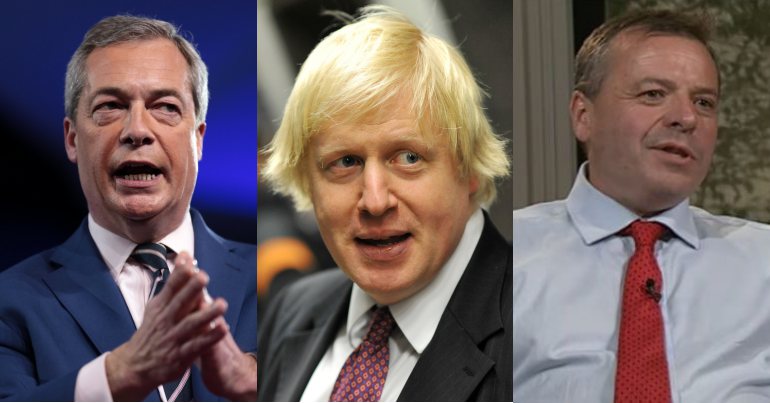 New evidence shines light on key dealings between groups that campaigned for Leave in the 2016 EU referendum.

In fact, some politicians have suggested this evidence demands immediate investigation ahead of Brexit.

Brittany Kaiser is the former director of business development for Cambridge Analytica (CA). In 2018, she gave evidence to a DCMSC investigation about the use of “fake news” in the EU referendum. On 30 July, the DCMSC shared a 61-page document from Kaiser that she said is:

important in furthering your inquiry into what happened between Cambridge Analytica, UKIP and the Leave.EU campaign.

As The Canary reported, the DCMSC published a damning report in July 2018 called Disinformation and ‘fake news’. It also stated that Arron Banks, the founder of Leave.EU:

is believed to have donated £8.4 million to the Leave campaign, the largest political donation in British politics, but it is unclear from where he obtained that amount of money.

Despite Kaiser’s initial evidence, the investigation couldn’t establish clear financial links between the key groups and parties involved. Banks also refused to reveal the source of his donation.

Kaiser, however, said of the new documents:

As multiple enquiries found that no work was done, I would like to appeal those decisions with further evidence that should hopefully help you and your colleagues reach new conclusions.

The dirty deeds of Leave.EU and Cambridge Analytica

Leave.EU claimed to have “played a decisive role” in winning the Brexit vote. One key Leave.EU player was Nigel Farage. Although the ‘official’ Vote Leave campaign – fronted by Boris Johnson and Michael Gove – was a separate organisation, as the Guardian reported in 2018:

In public, the official Leave campaign and Nigel Farage’s Leave.EU campaign were quite separate and appeared hostile to each other. But the connections between the two data firms [they used] raise fresh questions about possible overlaps between the two campaigns.

Kaiser’s evidence, meanwhile, shows that “Leave.EU and UKIP executives” instructed CA to carry out “chargeable work”. This was done without a signed contract. Yet Banks paid the invoice for that work to UKIP rather than CA. UKIP later decided not to pass this payment on to CA “as their party was not the beneficiary of the work, but Leave.EU was”.

Banks is currently under investigation by the National Crime Agency and the Information Commissioner’s Office. Both are investigating the role played by his companies during the referendum. Evidence suggests he’s also funding Farage in his Brexit Party project.

The document, meanwhile, contains hundreds of emails. Some prove, for example, that key Leave.EU players knew people would ask questions about “where the data came from”: 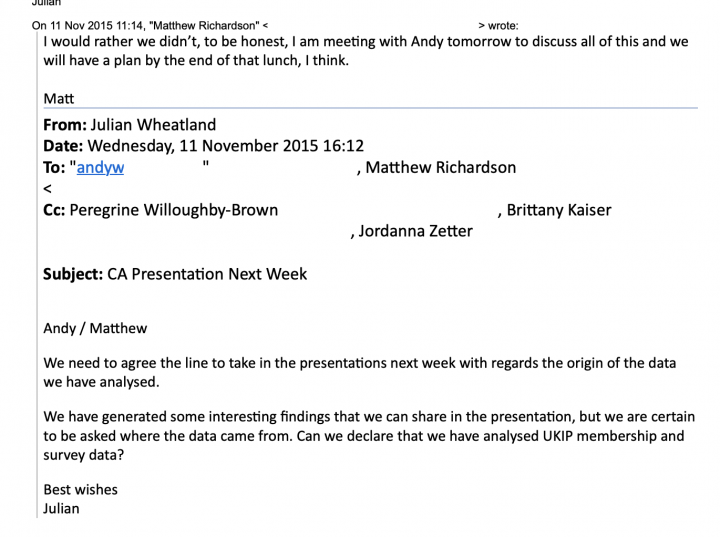 Others cast the net even further. One links Telegraph owners Frederick and David Barclay into the mix. And the name Matthew Richardson crops up in several emails. Journalist Carole Cadwalladr also noted the reference to Richardson. As she said, he’s “a key player who connects Nigel Farage to the US far right”. 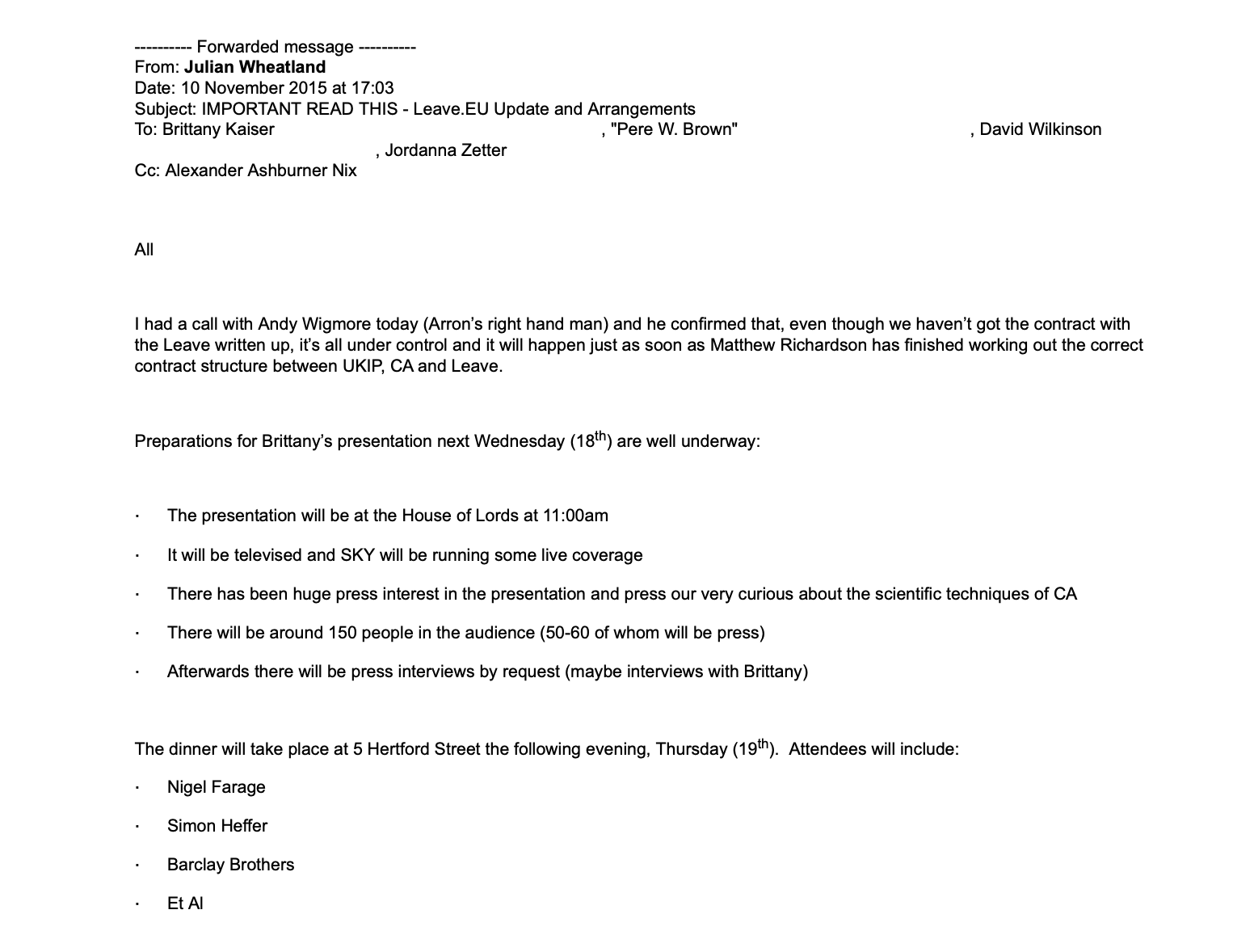 Farage believed he could turn Ukip into a more professional outfit… Richardson put him in touch with strategists and activists who specialised in ‘micro-campaigning’ and social media. At the same time, Breitbart and the Tea Party’s leadership saw in Farage a man with whom they could do business.

In 2017, Cadwalladr noted that Richardson:

effected Leave.eu’s introduction to Cambridge Analytica, [Andy] Wigmore said. “We had a guy called Matthew Richardson who’d known Nigel [Farage] for a long time and he’s always looked after the Mercers. The Mercers had said that here’s this company that we think might be useful.”

As The Canary‘s Tom Coburg reported:

Billionaire Trump supporter Robert Mercer was reportedly a financial backer of CA. And Mercer is not only Trump’s main financial backer, but he also funds the hard-right Breitbart News. And former Breibert executive chair Steve Bannon happened to be a board member of CA.

The 2018 DCMSC report also joined up more dots about the Leave campaigns. It stated that former Breitbart editor Steve Bannon “introduced Cambridge Analytica to Arron Banks and to Leave.EU”.

Since the referendum, Bannon’s allegedly been in communication with Johnson, Gove and Jacob Rees-Mogg who headed up the Vote Leave campaign (and now have key roles in Johnson’s cabinet, filled almost entirely with Vote Leave die-hards).

As The Canary reported, serious questions emerged about Facebook Brexit advertisements that failed to signal their source or purpose clearly. They were produced by AggregateIQ (AIQ) “on behalf of the Vote Leave and ‘50 Million’, BrexitCentral/BeLeave and DUP Vote to Leave campaigns”. It’s been established that 45% of these ads played on fears about immigration. What the ‘harvested’ data from CA allowed campaigns to do was to target these adverts to specific audiences.

Although not the ‘official’ campaign, Leave.EU also pushed a strong anti-immigration message producing the now infamous ‘breaking point’ posters that were reported to the police as a “blatant attempt to incite racial hatred”.

Kaiser’s new evidence shines further light on how the data to target these adverts was paid for and shared. With far-right, anti-immigration UKIP seemingly placed centre stage financially, the Brexit campaigns look even more worrying than ever before.

Kaiser’s evidence is extensive, far-reaching and utterly damning. Taken as a whole, it further exposes the corrupt links between all the Leave campaign’s key players.

Johnson’s hard-Brexit and hard-right cabinet and government has now pledged to push Brexit through, even if this means a dangerous no-deal situation.

If the UK voted to leave the EU fairly, that’s one thing. But Kaiser’s evidence suggests, yet again, that this really wasn’t the case. It’s time to fight back.