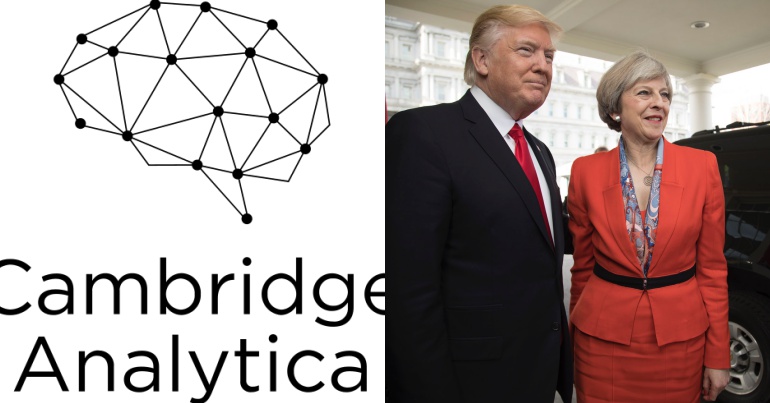 The scandal around Cambridge Analytica is growing. And it scrapes the barrel of both the British and US elites.

On 17 March, The Observer revealed that the data analytics company employed by Donald Trump’s election campaign and the Brexit Leave team ‘harvested’ millions of Facebook profiles. Then, on 19 March, a Channel 4 News feature further exposed the dealings of the company. Alexander Nix, head of Cambridge Analytica, allegedly offered to discredit political rivals, arrange smear campaigns, and use sex workers to entrap political opponents. But these allegations are just the tip of the iceberg.

EXCLUSIVE: Cambridge Analytica offers to “set up fake IDs and websites” or pose as students to hide their role in election campaigns. https://t.co/Swdr4k2BF8 #CambridgeAnalyticaUncovered

But Cambridge Analytica is just one company owned by the far larger SCL Group. As journalist Liam O’Hare pointed out:

Let's not forget Cambridge Analytica is a mere offshoot of SCL group, which lists the Ministry of Defence among its clients. Board members include an array of Lords, Tory donors and ex-UK army officers. This is scandal that cuts to the heart of the British establishment.

SCL has reportedly been around since 1993. But it launched publicly in 2005 at Defense Systems & Equipment International (DSEi) – the world’s largest arms fair. At this point, SCL described itself as the “first private-sector provider of psychological operations”. The launch was quite spectacular:

SCL Group showcased to potential clients at the DSEi arms fair in 2005. The pitch included a demonstration of how the UK government could use the media to fool the British people into the thinking a chemical plant accident had occurred which threatened central London. Genuinely.

They now claim to:

have conducted behavioral change programs in over 60 countries & have been formally recognized for our work in defense & social change.

As The Canary previously reported, concerns about Cambridge Analytica are not new. But its links to the SCL Group, and the key players in the company, show quite how deep these companies are entrenched in the British establishment. Major shareholders reportedly include:

As one solicitor said:

#CambridgeAnalytica Alexander Nix is an old Etonian? Truly remarkable what damage one school can do to a country, if not the globe. A sort of advert for it, I suppose. ‘Eton, producer of the most self-obsessed, amoral, power hungry fuckwits in the world’.

Here is the Daily Mail article boasting about Theresa May plotting with Cambridge Analytica just 3months before the Snap General Election was called.. just astonishing https://t.co/TkPeif2hbt

And it seems the Democratic Unionist Party (DUP) also paid for similar services:

But SCL has links with key players in the US political scene, too.

Steve Bannon, former White House chief strategist, was “political adviser” to Robert Mercer – a US hedge fund billionaire. Mercer reportedly invested: $15m into Cambridge Analytica; $10m into Bannon’s right-wing Breitbart media site; and donated $24.6m to the Republican Party in 2016. Also in 2016, Mercer and his daughter apparently introduced Bannon to Donald Trump. This was a perfect mix because:

Bannon’s greatest contribution may not have been his populist instincts and strategic brain but the “secret sauce” of his patron’s new technology firm that could identify the personality types of key swing voters that could find silent Trump supporters and deliver them to the ballot box.

Commentators have taken to Twitter to expose links that place Mercer “at the heart of all this”:

Robert Mercer is at the heart of all of this. His dark money flowing through the veins of an international company, using stolen data, to elect a demagogue. pic.twitter.com/CkTS4rlprE

A senior advisor at the United Nations made the links explicit:

As this scandal rolls on, it seems to lift the lid on the levels of deceit at the heart of politics in both the UK and the US. It remains to be seen if the key players will manage to use their wealth and establishment connections to crawl further into the political woodwork. But this could just mark a turning point to finally shine light on the dark layers of corruption.

Featured images via Wikimedia and The Whitehouse/Wikimedia