BREAKING: Extraordinary scenes at the High Court as participants and lawyers walk out of spying inquiry - Canary Workers’ Co-op 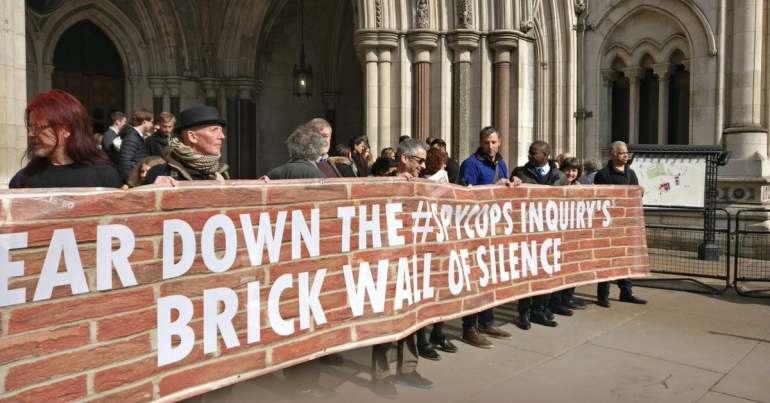 A mass walkout happened at the High Court on 21 March. Those involved in the Undercover Policing Inquiry and their lawyers left the court after an hour to show no confidence in its chairperson, John Mitting. Although I wasn’t able to attend the hearing today, I am a core participant in it and was one of those who instructed my lawyer to leave the hearing.

The hearing was the latest in a series of anonymity applications for former Special Demonstration Squad (SDS) officers. These are the officers who spied on protest groups between 1968 and 2006.

A series of tweets from the Campaign Opposing Police Surveillance (COPS), quoting Phillippa Kaufmann – the barrister for those spied on, shows why those of us involved in the inquiry no longer have any faith in it or its chairperson:

Phillippa Kaufmann QC speaks to Mitting for #spycops victims: we have expressed increasing concerns about your conduct. It has come to a head. We have problems with disclosure and yourself.

Kaufmann: we want inquiry to be as open as possible. Without it you can't take decisions on an informed basis. We need to test #spycops assertions but are prevented.

Kaufmann: You have never once explained why you dismiss our representations about #spycops anonymity.

Those involved in the inquiry have also lost faith in Mitting due to comments he made about married officers in a previous hearing:

Kaufmann: You said officer HN58 didn't abuse his power because he had been married for a long time. We challenged it, you said you were "perhaps old fashioned". Despite this, you maintained your view & granted anonymity.

"We have the usual white, upper middle class eldery gentleman, who's life experience has nothing in common with people spied upon" Kuafmann to Mitting to cheers and clapping from the gallery #spycops

Kaufmann then issued the demands of those of us involved in the inquiry:

Kaufmann: the victims don't want an inquiry presided over by someone naive & old fashioned. They have no confidence on you. They ask that you step down, or bring about a true panel of others that understand the subject & experience of the issues.

Kaufmann explained her instructions and was met with applause from the public gallery:

Kaufmann: I am instructed together with my team to leave the hearing.

Kaufmann draws huge applause. With that, Kaufmann and her team and the entire public gallery have walked out of the hearing. Mitting is beetroot faced.

Journalists attending the hearing were shocked:

Blimey – #spycops victims and legal team walked out of the inquiry after a devastating no confidence attack on the “naive and old fashioned” chair, judge John Mitting https://t.co/VtjtuOAhLV

Those who left the hearing also blockaded the front of the court:

#spycops campaigners have walked out and have blocked the entrance to the Royal Courts of Justice pic.twitter.com/zpT3HPwh89

The decision to walk out of the hearing was not taken lightly. But those of us involved feel like we no longer have a choice. Mitting is blocking access to justice for those of us who were spied upon at every step of the way. He is allowing evidence that we are not allowed to see or challenge that has been generated by people who lied for a living.

The only way confidence can be restored in the inquiry is for Mitting to step down.

– Support Police Spies Out of Our Lives.