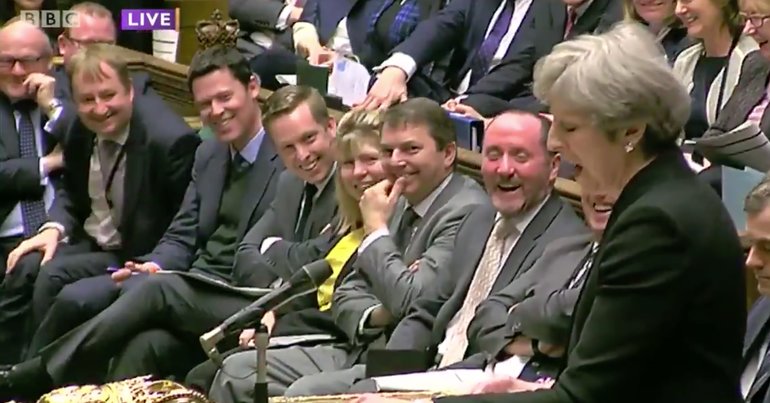 A bizarre exchange took place during prime minister’s questions (PMQs) today. In scenes more fitting in a 1960s Carry On film, a Tory MP joked that he would “give one” to Theresa May. While the male MP’s comment and the prime minister’s response tickled the backbenches, it did little to elevate PMQs from the gutter.

Your place or mine?

Conservative MP Tom Pursglove’s question was focused around a new type of reusable coffee cup. Given the recent financial collapse of Northamptonshire Council, his constituents might have hoped the Northamptonshire MP might have challenged the PM to protect local services. Instead, Pursglove used up valuable parliamentary time flirting with the PM. Closing his comments on the cups, he quipped:

Perhaps if she is around afterwards, I might be able to give one to her?

This set the schoolboys of Westminster giggling. Leaping on the moment, May responded in full school ma’am mode:

If he would like to come and see me afterwards…

“Perhaps if she is around afterwards. I might be able to give one to her” @VotePursglove

“If he would like to come along and see me afterwards….” @theresa_may #pmqs pic.twitter.com/TwCweuyVo2

It would have been unedifying had it happened in the local shop. But this is prime minister’s questions in the houses of parliament. And instead of dealing with the major issues facing Britain, a bunch of (predominantly) public school boys are giggling about ‘doing headmistress’. Gross.