Something stinks about Farage's latest Thames stunt, and it isn't the fish - Canary Workers’ Co-op 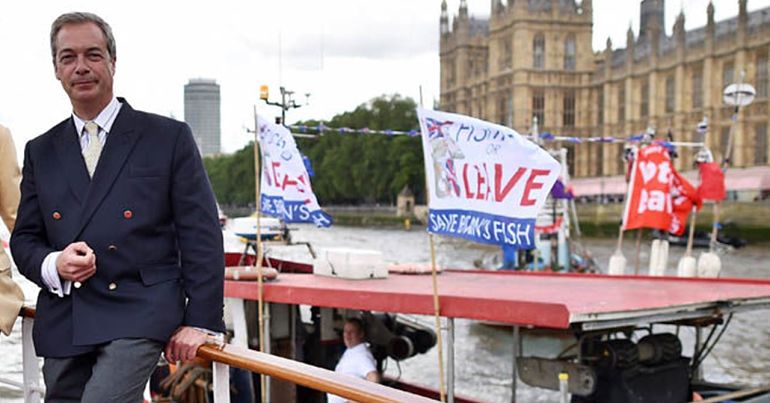 Nigel Farage’s latest stunt on the Thames saw him tossing dead fish into the river. The former UKIP leader said it’s a protest against quotas that force the fishing industry to discard edible fish. The performance has drawn attention to Farage’s history with fishing though, and it’s leading some to suggest he may be using the issue for his own ends.

Before the referendum, Farage complained that fishing had been gutted by the EU. In response, Greenpeace revealed that he only attended one of 42 meetings when he was a member of the European Parliament Fisheries Committee. Greenpeace also pointed out:

In 2013, Nigel Farage was again present but chose not to vote on the part of the reform of the CFP [Common Fisheries Policy] that introduces an obligation on governments to give more fishing quota to sustainable fishermen who contribute the most to the local, coastal economies. This would see the government giving more fishing quota to local, low impact fishing fleets, such as the fishermen featured in UKIP’s poster.

The internet doesn’t forget these things, which is why Farage’s latest caper has drawn the following responses:

Nigel Farage pretends that he cares about British fishermen.

When he had the opportunity to actually act on their behalf he turned up to just 1 out of 42 meetings.

Gary thinks it’s funny that an entire British industry has been devastated. He is in the same category as Bob Geldof. https://t.co/UCwSGqW1df

No, I think you’re funny. Funny how you pretend to care about the industry yet during the three years that you were a member of the European Parliament Fisheries Committee, you attended one out of 42 meetings. #hakenews https://t.co/e4k4Bb8tTs

Dead in the water

The internet being the internet means that responses like the following were out there too:

Under the theory of infinite quantum quilted multiverses, in a parallel universe somewhere a giant cod is on a Thames barge throwing buckets of tiny Jacob Rees-Moggs overboard. I want to live there.

we can dream can't we? pic.twitter.com/jSyus7eh9z

This is so brilliant!

Brexiteers are staging a protest over the transitional fishing deal by dumping fish into the Thames. The vessel they are on tried to land at Embankment pier only to be told they don't have permission. EMBRACE THE HARD BORDER!

But does he have a point?

Farage was joined by Fishing for Leave co-founder, Aaron Brown. Fishing for Leave also organised the Thames flotilla before the Brexit referendum in which Farage and Bob Geldof competed over who could make the biggest arse of themselves.

Speaking on 20 March, Alan Hastings of Fishing for Leave said:

The platitudes we’ve been offered — the grandstanding of “taking back control” — has just been a smokescreen for a sellout.

David Davis is the weakest, simplest, most ineffectual, useless, and spineless man that’s ever existed. He’s a national disgrace

Hastings claims that the UK’s lack of a veto in the proposed transition period will leave British territory open to European fishing boats. Scottish Tory MP John Lamont has also threatened to vote against any final Brexit deal that isn’t favourable for the fishing industry.

It’s certainly the case that most people don’t want Brexit to make things worse for British industry. So far, the government hasn’t achieved much in the way of securing a better future post-Brexit though. Which makes it all the more unfortunate that Farage didn’t do something to improve things for UK fishing when he had the chance.