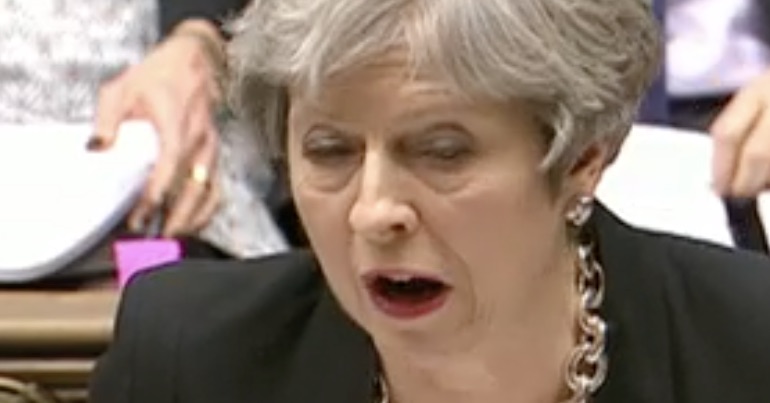 On 21 March, Theresa May faced a direct question about Conservative Party links to Cambridge Analytica and its parent company Strategic Communications Laboratories Group (SCL). And although May denied the government has any “current contracts” with SCL or Cambridge Analytica, she failed to give a direct answer to the question. In fact, she dodged it entirely. Here’s why.

During prime minister’s questions (PMQs), Scottish National Party MP Ian Blackford said there were a “worrying number of links” and explained these clearly:

Here's @IanBlackfordMP questioning Theresa May on links between Tory party and Cambridge Analytica/SCL group as I revealed yesterday. Note the PM's emphasise on "current" contracts. pic.twitter.com/Yw1udX5Ao3

Concerns about Cambridge Analytica are not new. But as The Canary previously reported, there are significant links between the party and Cambridge Analytica’s parent company, SCL Group. It was these that Blackford pointed out to May.

Missed out a piece of info on SCL shareholder Jonathan Marland. As well as being ex Tory treasurer, he has also donated £304k to the Tory party including £42k to Boris Johnson. H/t @Barking_Madness.

Then there’s Julian Wheatland, chairman of the SCL board and chair of the Oxford Conservatives:

SLC’s links to the Conservative party go even deeper. The company’s chairman is venture capitalist Julian Wheatland. He also happens to be chairman of Oxfordshire Conservatives Association.

Wheatland’s Twitter account doesn’t seem to be working right now. But the internet is magic. Because others found out that Wheatland also seems to be quite friendly with David Cameron:

? Here's a photograph of the Chairman of the board of SCL Group, which The Times and The Guardian have reported as being the 'parent company' of Cambridge Analytica, campaigning alongside former Tory leader David Cameron. #PMQs pic.twitter.com/Pfx2GZRVIh

Then there’s SCL president Rt Hon Sir Geoffrey Pattie, who was a Conservative MP until 1997. As journalist Liam O’Hare explained for Bella Caledonia:

The President of SCL is Sir Geoffrey Pattie, a former Conservative MP and the Defence Minister in Margaret Thatcher’s government. Pattie also co-founded Terrington Management which lists BAE Systems and Lockheed Martin among its clients.

Reports about the operations of #CambridgeAnalytica raise very serious questions about our democracy and bring to light evidence of links between them and the Tories #PMQs https://t.co/Ic3Rv2d4bH

At PMQs, May said:

She also added that “the allegations are clearly very concerning, it is absolutely right they should be properly investigated”.

But according to The Mail on Sunday, Theresa May’s government was apparently “in talks” with Cambridge Analytica only months before calling a snap general election in 2017. So Green MP Caroline Lucas questioned May’s use of the word “current”:

The Prime Minister says the Govt has no current contracts with Cambridge Analytica or SCL. But what about past deals?

And can she confirm whether these reports of meetings with them are true? https://t.co/RrAB5bj6ZS #PMQs

Further evidence has emerged [pdf] that shows the Ministry of Defence made payments to SCL as recently as 2015. This has led some to ask whether the government might now be slightly compromised:

If you’re wondering what I’m saying SCL might have in the way of kompromat on the UK establishment, preventing a real response, it’s the same reason I’ve been tweeting an article about GCHQ from last October.@DefenceHQ used SCL: https://t.co/Kg6mtnfPYa

Blackford asked a very valid question. As did Lucas. But these don’t seem to be questions that May and the Tories are prepared to answer right now.