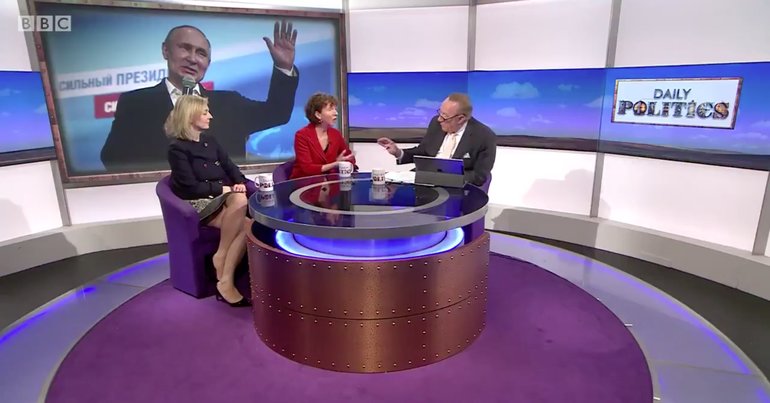 Andrew Neil came unstuck today as he tried to mansplain the Russia scare to Labour’s Anneliese Dodds. After an extraordinary show of patience, the shadow treasury minister deftly put the BBC Daily Politics host back in his box; reminding him that she was the one at the table with actual experience of dealing with Russia.

In the blue corner…

Andrew Neil is the host of the BBC‘s Daily Politics and Sunday Politics shows. He is also chairman of Press Holdings – a company registered in the tax haven of Jersey. The company (owned by the billionaire Barclay brothers) owns a number of conservative media outlets, such as The Telegraph and Spectator. Neil was formerly a political adviser for the Conservative Party, and an executive editor of Fox News in the US.

Neil is hawkish when it comes to foreign military adventures, and a cheerleader of the disastrous invasions of Iraq and Afghanistan. So much so that, when The Guardian and New Statesman published dissenting views on the wars, he labelled them The Daily Terrorist and New Taliban respectively. Therefore, it was somewhat unsurprising that he would attempt to denounce Dodds for Labour’s considered position on Russia. He underestimated his guest, though.

In the red corner…

Anneliese Dodds is a former Oxford MEP and now Labour shadow treasury minister – a woman with extensive international experience. She served on the European Monetary Affairs Committee, working to reduce tax avoidance by major companies. She also spent time in the Balkans, supporting the work of the EU-Montenegro Stabilisation and Association Parliamentary Committee. The committee was concerned with ensuring the rights of disabled people in the post-Soviet states. During her time there, she learned a lot about dealing with Russia.

Neil was particularly aggressive with Dodds in today’s interview – cutting her off and accusing her party of appeasing Russia. He began his questioning with:

Mr Corbyn, he wants us to send samples of this nerve agent to Moscow. What would be the point of that?

For almost 90 seconds, Neil prevented Dodds from giving an answer by continuously interrupting and speaking over her. He then went off on a near minute-long rant about Labour and Russia. This left Dodds with less than a minute to make any intervention. Exasperated, Dodds cut Neil off:

I’ve had a lot of experience of how the Russians operate, ok. I used to work in the western Balkans. I see how they operate. They don’t follow international law. But this country always should.

And that’s where we have the moral high ground, and we should not surrender that.

A dejected Neil then threw his hands up in the air and declared that he still didn’t understand and “our viewers will make their mind up on that”.

"Mr Corbyn, he wants us to send samples of this nerve agent to Moscow, what would be the point of that?" @afneil asks @AnnelieseDodds

“We have to keep the moral high ground on this, that means complying with those international rules" says shadow Treasury minister #bbcdp pic.twitter.com/Kk2NIMH1gu

Perhaps Mr Neil would do better to stick to his own areas of expertise.