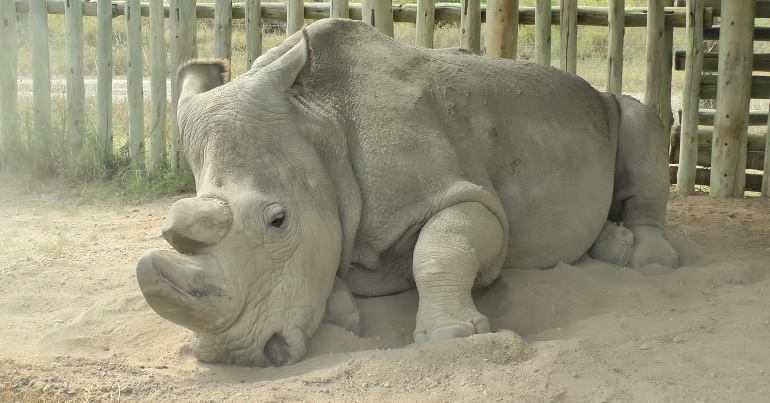 One of the most famous profiles on the dating app Tinder was for Sudan, the last male northern white rhino left on Earth.

But Sudan tragically passed away on 19 March. And it’s causing worldwide outrage, as people mourn the passing of “the most eligible bachelor in the world” and face up to the fact that “we did this“.

Sudan was 45 years old and died of age-related issues. He lived in the Ol Pejeta Conservancy in Kenya, where staff had protected the “gentle giant” from poaching for most of his life. A representative for Ol Pejeta, Elodie Sampere, said of Sudan:

He was a gentle giant, his personality was just amazing and given his size, a lot of people were afraid of him. But there was nothing mean about him

The charity Helping Rhinos also put together a tribute for Sudan upon news of his passing:

Now, only two other northern white rhinos remain, Sudan’s daughter Najin and granddaughter Fatu. And although this particular subspecies of rhino is particularly close to extinction, rhino numbers as a whole have reduced dramatically over the last century. Conservationists estimated that only 30,000 rhinos in total existed in the wild as of 2015. There were around 500,000 in 1900.

The director of charity Wildlife Direct, Paula Kahumbu, hopes Sudan’s loss will be a wake-up call to people:

We did not do enough to save this majestic species. Now we must stand up and demand action – take action – to prevent the same thing happening to cheetah, elephants, black rhinos, giraffes

Conservationists created Sudan’s dating app profile in 2017 to raise money for fertility treatment. Now he has died, IVF treatment involving Sudan’s sperm and that of other deceased white rhinos, stem cell science and a surrogate offers the only chance for survival of this species.

Many people have, however, reacted to Sudan’s death with regret that such steps are necessary. And they’ve identified who bears responsibility for the loss of his species:

The last Male has fallen #WeDidThis the last Northern White African male rhino marks the certain extinction of this incredible species. Rest in peace Sudan, you deserved so much better. On behalf of all mankind, I’m sorry #WeDidThis ? @OlPejeta

Humanity is the driver behind most species’ extinctions. Our poaching, our pollution, our man-made climate issues, and our over-population all contribute to the demise of creatures like Sudan. And the northern white rhino is just one of many species struggling to survive. In fact, a study found we lost 58% of global animal populations between 1970 and 2012.

As the hashtag says, “we did this”. And as Sudan’s death shows, we’re now seriously running out of time to do something else to put that right.

– Help elephants, another threatened species, with Action for Elephants UK.