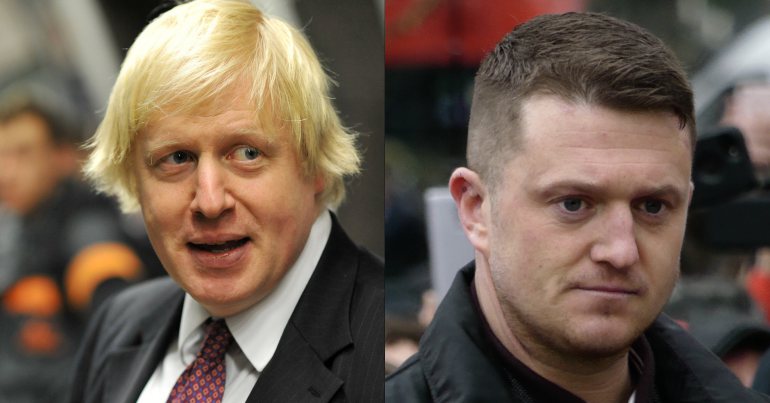 On 25 July, Boris Johnson met with his new cabinet and made his first speech in parliament. Since coming to power, Johnson’s installed hard-Brexiteers into key positions. But his non-ministerial appointments are equally worrying.

Now he’s given an important role to a hard-right lobbyist who openly supported the deputy leader of a racist group run by Stephen Yaxley-Lennon (aka Tommy Robinson).

As The Canary reported, Johnson’s already given key roles to many high profile names from the Vote Leave campaign. And on 25 July, Johnson appointed Chloe Westley as his digital campaigns advisor.

Westley is campaign manager for the TaxPayers’ Alliance (TPA), a right-wing “think tank and lobbying group”. She was also head of social media for Vote Leave. But Westley’s dubious connections don’t stop there.

As news emerged of her appointment, people shared a now deleted tweet that showed Westley openly supporting Anne Marie Waters. In 2015, Yaxley-Lennon made Waters the deputy leader of his new group Pegida UK. This is a “far-right nationalist group that… campaigns against the supposed ‘Islamification of Europe'”. Pegida’s views are so extreme that in 2016 UKIP refused to let Waters stand as a candidate.

In June 2016, the Rotherham Advisor reported that:

I see Westley has been deleting old tweets including this. pic.twitter.com/KcSR76vr1H

After a failed bid to lead UKIP, Waters now runs Sharia Watch UK. As the Institute of Race Relations reported, in one speech, “Waters linked Islam to child abuse”.

I thought it couldn't get any worse. pic.twitter.com/0i2OiXzQGn

We basically have a Harrods Tommy Robinson running the fucking country!

This isn’t the only concern about Westley.

In 2018, the Electoral Commission fined Vote Leave £61,000 and reported it to the police for criminal investigation. As whistleblower Shahmir Sanni explained on Twitter, Westley’s activities during the EU referendum campaign are now under police investigation:

Chloe Westley set up the BeLeave MailChimp account and then pretended (along with Johnson, Elliot, Patel and all of Vote Leave) that BeLeave was never a part of Vote Leave. Her emails are PRIME evidence in the Metropolitan Police investigation. I feel fucking sick. https://t.co/QfBV8ZyI9S pic.twitter.com/zIhLePJCqF

Sir Anthony Bamford, the JCB tycoon, whose family and company have donated more than £1m to the Conservatives, said he has helped fund the TPA

In 2019 alone, Bamford and JCB made “nine separate donations” to Johnson. Elliott is editor-at-large of BrexitCentral and was chief executive of Vote Leave. Westley is also a contributor of BrexitCentral.

Many people are hugely concerned about Johnson’s latest appointments:

2/ it will deregulate, privatise, revoke rights, possibly break the union and risk destroying our environment at a faster rate. It will also lead to a meaner, ruggedly individualistic Britain where more of the vulnerable, and even some who are not, slip the through cracks.

Rumour is that Chloe Westley is getting a job too. Lobbyists shouldn't be allowed anywhere near government unless and until they reveal their funders in full, and receive proper vetting. This is an ongoing right-wing coup.

In just four days since coming to power, Johnson’s filled the cabinet and government with far-right figures at a terrifying speed. He’s made Theresa May – the architect of the ‘hostile environment‘ and enforcer of austerity – look liberal. Racists Donald Trump and Steve Bannon must be rubbing their hands with glee.

Never have protest and resistance been so urgently needed in the UK.