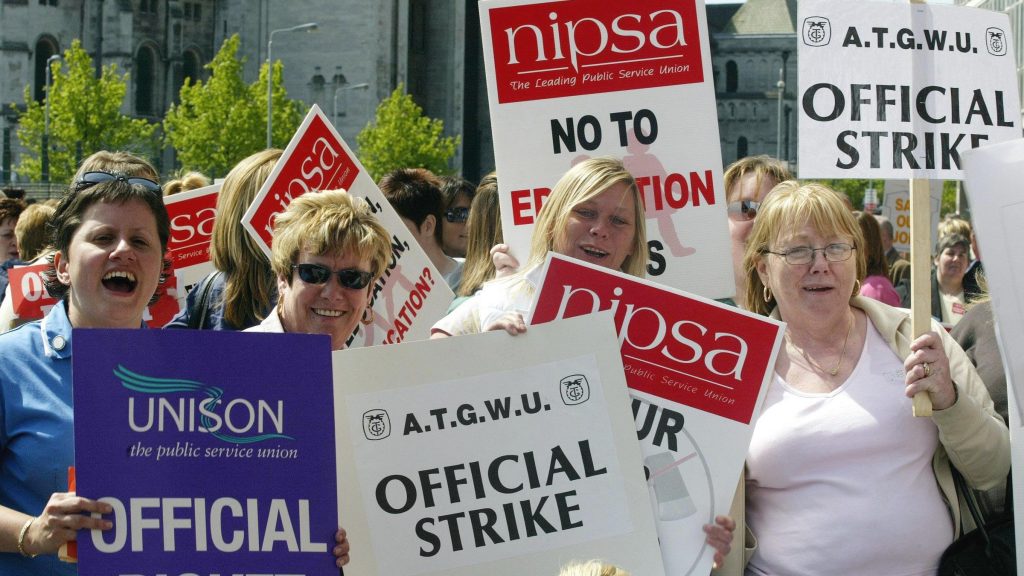 More than 4,000 civil servants have taken one-day strike action in Northern Ireland on Friday over pay.

Noisy picket lines formed across the country from early on Friday to protest against years of what workers derided as “unsustainable” increases.

Major rallies were held in Belfast and Londonderry.

Veteran campaigner Eamonn McCann said: “This is the beginning of a real challenge from the trade union movement to the priorities of the Tory government.

“I think that nothing but good can come from it.”

Owen Reidy, from the Irish Congress of Trade Unions, said workers had had enough after eight years of below inflation increases.

“This is a situation that is not sustainable.”

He said a tenth of the public-sector workforce was receiving less than a real living wage.

Nipsa said its members had received a below-inflation pay rise for the ninth year in a row.

Stormont’s Department of Finance said the rise was “fair in the context of the challenging financial environment”.

Most civil servants are in line for a 1.25% pay rise for the 2018/2019 financial year. But Nipsa said this will not keep up with the cost of living because inflation is at 2%.

The lowest-paid civil servants are expected to receive 3%.

“Over the last eight years inflation has been well in excess of 1% except for two years, so public-sector workers are less well off than they were in 2010.

“This situation is neither acceptable nor sustainable.”

McCann said there was an upbeat and optimistic atmosphere at the Londonderry rally.

“A great number of people were relieved that at long last action was being taken.

“There have been understandable complaints for month after month, year after year, about the anti-union laws and about the downward pressure on pay, coming ultimately from the Tory government.”

He said morale was high on the picket lines.

“It was perfectly plain that the vast majority of people driving or walking past picket lines indicated support.”

He added: “There is an appetite for a fightback against poverty wages, against the lack of trade union rights.”