An £8.4m donation to the Leave campaign may have changed UK history - Canary 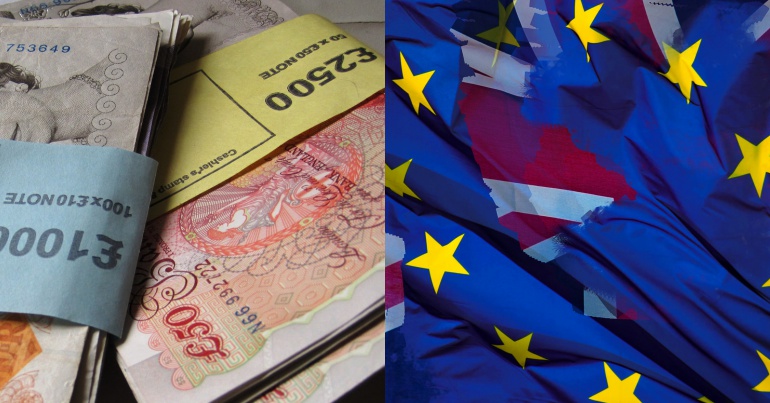 On 29 July, a report [pdf] entitled Disinformation and ‘fake news’ emerged following a cross-party parliamentary inquiry. It examines “issues concerning the very future of democracy” in the UK following the EU referendum. Its findings are damning. But it also revealed [pdf, p51] that a Leave group received the “largest donation to a political campaign in British history”.

“Our democracy is at risk”

The report [pdf, p5] is unequivocal about the “deliberate distortion of facts” and “political manipulation” during the referendum. As a result, it states: “our democracy is at risk”.

One detail also emerged that shakes the process of the referendum to its core. It states [pdf, p52] that Arron Banks, the founder of Leave.EU, donated a vast sum:

Arron Banks is believed to have donated £8.4 million to the Leave campaign, the largest political donation in British politics, but it is unclear from where he obtained that amount of money.

Leave.EU claims to have “played a decisive role” in winning the Brexit vote. The other key Leave.EU player was Nigel Farage.

Although the ‘official’ Vote Leave campaign – fronted by Boris Johnson and Michael Gove – was a separate organisation, the Guardian reported in March:

In public, the official Leave campaign and Nigel Farage’s Leave.EU campaign were quite separate and appeared hostile to each other. But the connections between the two data firms [they used] raise fresh questions about possible overlaps between the two campaigns.

As The Canary previously reported, serious questions have emerged in relation to the ways Facebook advertisements failed to signal their source or purpose clearly. These were produced [pdf, p1] by AggregateIQ (AIQ), “on behalf of the Vote Leave and ‘50 Million’, BrexitCentral/BeLeave and DUP Vote to Leave campaigns”. It’s been established that 45% of these ads played on fears about immigration.

Although not the ‘official’ campaign, Leave.EU also pushed a strong anti-immigration message. This poses significant questions about the purpose of Banks’ £8.4m investment. And there are further concerns about the interconnections between all the Leave groups.

a firestorm that, just like a bush fire, it blows over the thing. Our skill was creating bush fires and then putting a big fan on and making the fan blow. […] the immigration issue was the one that set the wild fires burning.

Leave.EU’s campaign featured the now infamous ‘breaking point’ posters that were reported to the police as a “blatant attempt to incite racial hatred”.

According to the Guardian, Leave.EU “spent millions” on social media campaigning and claimed it had “1 million followers… on social media by polling day”. To ensure maximum impact Banks reportedly took advice from hypnotist Paul McKenna. Banks claimed that social media ads were “the key to winning wavering voters”.

the power of using emotion, rather than facts, which “created a wave of hatred and racism and all this right movement, empowering all those things”.

If you take away all the hideous horror […] it was very clear, the way they managed to do what they did. In its pure marketing sense. […] You can see the logic of how they presented things and the imagery, everything from that.

It’s now known that so-called ‘dark ads’ were used throughout the referendum. As a recent report [pdf, p13] by the Electoral Commission stated:

Only the company and campaigner know why a voter was targeted and how much was spent on a particular campaign.

And the links between the companies behind these ads and the various Leave groups grow murkier by the day.

This report also starts to join up more dots about the Leave campaigns. It states [pdf, p29] that former Breitbart editor Steve Bannon “introduced Cambridge Analytica to Arron Banks and to Leave.EU”. It’s recently emerged that, since the referendum, Bannon has allegedly been in communication with Johnson, Gove and Jacob Rees-Mogg who headed up the Vote Leave campaign.

The allegations of data harvesting revealed the extent of data misuse… facilitated by Facebook… and manipulated into micro-targeting Cambridge Analytica and its associated companies, through AIQ.

The report also notes [pdf, p16] that Cambridge Analytica “was brought to our attention by Arron Banks himself”. It went on to say:

A document from Cambridge Analytica’s presentation pitch to Leave.EU stated that “We will co-ordinate a programme of targeted solicitation, using digital advertising and other media as appropriate to raise funds for Leave.EU in the UK, the USA, and in other countries”.

The committee also flagged further concerns [pdf, p36] about “links within this seemingly small community involved in political micro-targeting and about the potential for data misuse”.

During the inquiry, Mark Zuckerberg – “the person who decides what happens at Facebook” – refused [pdf, p21] to provide evidence in person.

concludes that an even bigger concern than obviously false information is the ma­nipu­la­tion and misuse of personal data and the deliberate stoking of fears and prejudices — by state-sponsored actors, private companies and other groups agendas — to influence voting.

Banks’s £8.4m donation sounds another ominous note. He’s yet to disclose where it came from, too. But given Leave.EU’s focus on advertising, it could have helped change the UK’s history.

As Brexit negotiations slip further into chaos, the UK’s on standby to stockpile food because we might crash out of the EU with no deal. The army is reportedly on hand to help with this. And now, this report warns that our “democracy is at risk”.

Far from “Brexit means Brexit”, it looks like Brexit actually means the risk of total collapse. And new revelations of corruption, on a near-daily basis, show how we got here.