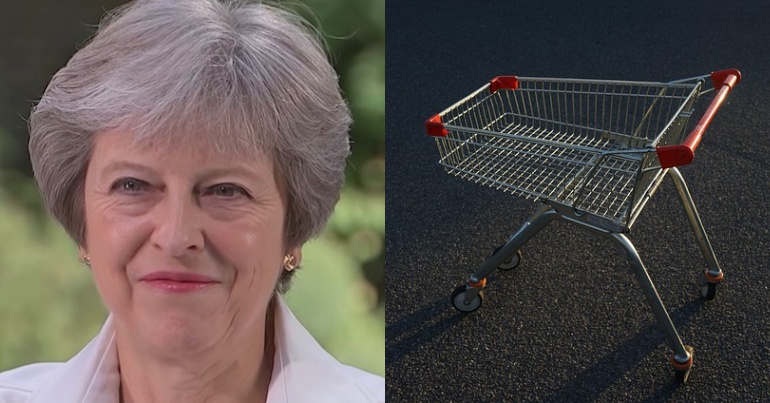 On 25 July, Theresa May told the British public to take “reassurance and comfort” if the government needs to stockpile food. This reiterated Brexit secretary Dominic Raab’s ‘assurances’. Raab claimed there would be “adequate” food if the UK crashes out of the EU with a ‘no-deal’ Brexit.

But it turns out this is utter rubbish. Because if there’s no deal, it’s pretty much impossible to stockpile food. And no one seems to be taking responsibility for doing so.

A statement issued by the British Retail Consortium said:

Stockpiling of food is not a practical response to a no-deal on Brexit and industry has not been approached by Government to begin planning for this. Retailers do not have the facilities to house stockpiled goods and in the case of fresh produce, it is simply not possible to do so.

On 27 July, the Financial Times featured [paywall] a front-page story that further outlined the issues. The chief executive of one supermarket reportedly called it “ridiculous” and said:

It’s scary because it shows how far the government is from the reality of how things work. It’s genuinely worrying.

This has left many people questioning what is going on:

In just one week, open discussion about stockpiling food and medicine has slipped into conversation.

But we need to remember that this isn’t normal:

We must not normalise what this govt are doing. Stockpiling food & medicine should not even be a consideration in Britain, in 2018, deal or no deal. It demonstrates govt cannot do their job, have lost the ability to communicate, negotiate, & are caught in dangerous tunnel vision.

It’s not ‘normal’ for a country with the fifth-biggest economy in the world to stockpile food during peacetime:

When will the penny drop? Brexit is a pile of shit.

And as Labour MP David Lammy pointed out, the current – almost casual – discussions about a no-deal Brexit are “monumentally stupid”:

But the fact that this has happened shows how woefully unprepared for Brexit this government really is. Because warnings about a post-Brexit food crisis aren’t new.

In 2017, the University of Sussex Science Policy Research Unit (SPRU) issued a report [pdf] called A Food Brexit: time to get real. It said the UK was “unprepared for the most complex ever change to its food system”. At the time, one of the authors – Prof Tim Lang – said:

UK food security and sustainability are now at stake. A food system which has an estimated three to five days of stocks cannot just walk away from the EU, which provides us with 31 per cent of our food. Anyone who thinks that this will be simple is ill-informed…

this is a serious policy failure on an unprecedented scale.

So not only did May’s government apparently fail to plan for this outcome – it’s also tipping the UK even further towards chaos. It seems there isn’t anywhere to stockpile food, and that the government hasn’t taken any responsibility for the logistics to do so; nor has it spoken to the key industry players whose expertise would be vital.

No matter what May says, there’s no “comfort”.

It looks like we’re sleepwalking into dystopia. And it’s time to wake up.