The DWP was just savaged in a 'dossier of disgrace' - Canary

The Department for Work and Pensions (DWP) has been slammed in a report called ‘A Dossier of Disgrace’. The document shows a catalogue of errors. And one leading professional has accused the DWP of an “ideological standpoint” that “demonises” people.

The DWP: up to its neck in controversy. Again.

NUBSLI is unequivocal in where the blame lies for these failings: the government, and more specifically, the DWP.

As the main supply route for all public sector customers… our agreement ensures that they have access to quality interpreters… in an efficient and cost effective way.

The framework lists all the government approved companies that public sector bodies can use. Some agencies use self-employed interpreters. But NUBSLI believes that the framework has led to chaos in the interpreter profession, and for deaf people.

The whole concept of frameworks is that they can provide cost savings. By buying in bulk, it is expected that savings can be made… This model doesn’t work for services provided by professionals, whose overheads do not diminish.

NUBSLI has various concerns about the framework agreement. These include [pdf, p4] agency interpreter’s pay, and the “lack of accountability” if deaf people want to complain about a service.

This is where the DWP comes in. Because in 2017, it released a report on the state of the UK’s BSL interpreter profession. And NUBSLI claims [pdf, p9] the report was “not fit for purpose”.

It says [pdf, p6-7] the DWP report, a “marketplace review”, did highlight the lack of BSL interpreters in the UK and also that deaf people’s needs were not being met. But overall, NUBSLI says [pdf, p3] the report ignored two crucial points:

Both these points are examples of the concerns NUBSLI has over the framework agreement. But the DWP failed to highlight them, even though NUBSLI was on the steering group for the report [pdf, p6].

So, where has this left BSL interpreters and deaf people? NUBSLI still have overarching concerns [pdf, p10]: 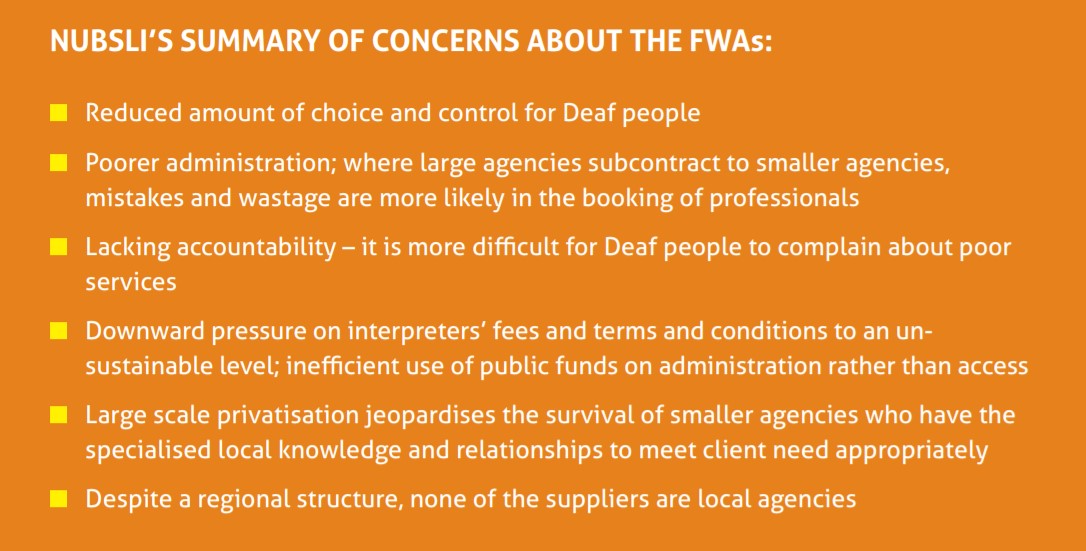 The situation is so bad that even a UN report in September 2017 highlighted [pdf, p3] the lack of BSL interpreters. But this is not the end of the story for deaf people. Because while controversy still surrounds the framework agreement, the DWP is busy eroding deaf people’s communication support even further.

As NUBSLI’s report also highlights, the DWP has restricted a policy called Access to Work. It’s a scheme where the DWP gives a grant to an employee for changes or support they need to carry out their job. This is on top of any reasonable adjustments an employer should make under the Equality Act 2010.

But since 2015, Access to Work has been capped. As The Canary previously reported, a deaf person affected by the cap has taken the DWP to court over it, with the result still pending. And as NUBSLI outlines [pdf, p8] in its report, changes to the scheme have:

led to people losing much needed support and placed jobs at risk.

Overall, NUBSLI notes that the framework agreement, combined with Access to Work, could present serious issues. It says [pdf, p8]:

The [framework agreement] will instigate its own cap on the hourly amount for any contract. Any agency administering the [Access to Work] budget for a Deaf person will use this amount to cut the rates of pay for an interpreter… The fees offered to a [BSL] interpreter will be below market rates… resulting in even fewer interpreters being available to work within [Access to Work] settings…

The DWP is attempting to control the market by using a framework that does not follow the market rates interpreters charge.

These findings are no surprise to anyone familiar with the DWP. Specifically, their practice of ignoring any evidence which doesn’t fit with their ideological standpoint; one of demonising service providers and users under the guise of austerity. They have repeatedly ignored warnings against the use of framework agreements for BSL/English interpreting provision; as seen in their marketplace review… Which failed to include the liquidation of Pearl Linguistics and the boycott of Language Line Solutions.

Framework agreements started a race to the bottom. The rights of… deaf people and service providers are ignored in favour of the customer’s bottom line and the agency’s profit margin. Appointments are left unfulfilled, or unqualified/inexperienced interpreters are being used… This model is unstable… We need the DWP to admit this sooner rather than later. Because ultimately it is deaf people who are suffering.

As NUBSLI’s report says, there is a catalogue of failures surrounding interpreters and deaf people’s right to them. It’s a damning indictment of a worsening situation, one that encapsulates what happens when a private ‘marketplace’ gets involved in public services. And as always, it’s those who can least afford to be penalised, who ultimately suffer.

The Canary contacted the DWP for comment but had received none at the time of publication.