As NHS privatisation gathers pace, these workers are taking action for the first time ever [IMAGES] - Canary Workers’ Co-op 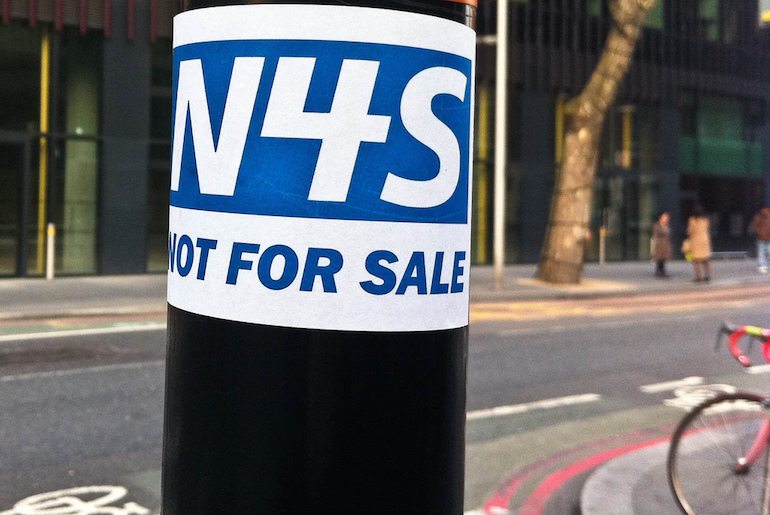 On Thursday 1 December, Canary Wharf in London saw the exposing of another NHS privatisation scandal. And the revelations about the selling-off of some essential services will have a massive impact on both staff and patients alike.

The National Union of British Sign Language Interpreters (NUBSLI) held a flash protest outside the offices of LanguageLine Solutions (LLS). NUBSLI was demonstrating about the government’s awarding of contracts to the company. The union says that LLS – an agency for interpreters and the main NHS provider of interpreting services – has slashed its staff’s pay since it took over NHS contracts in Sheffield: 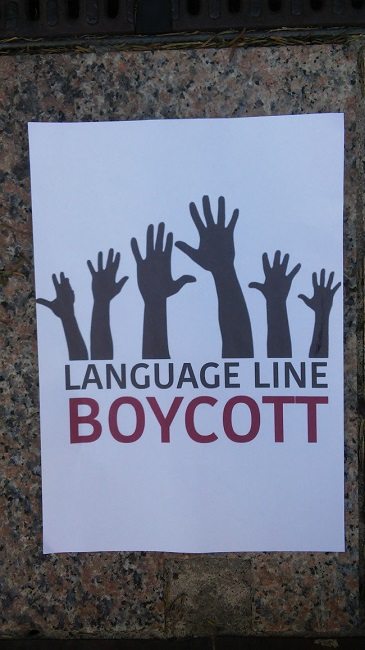 The protesters from NUBSLI chanted “Hey! Ho! Language Line must go!”. Security staff were present, but did not interfere with the demonstration: 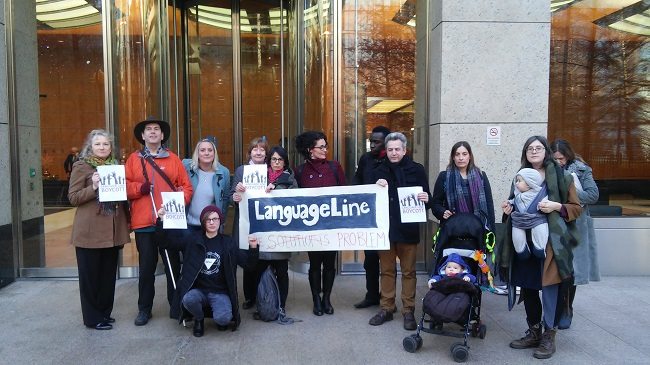 Roger Lewis from Disabled People Against Cuts (DPAC) said that LLS treated sign language like ‘mime’. He also accused LLS of being a “cowboy company”, only interested in “making money” out of deaf people:

LLS won three contracts to deliver British Sign Language (BSL) interpreting services in Sheffield. But NUBSLI claims that the company achieved this by reducing interpreters’ pay and altering contracts, without any union consultation. The union also says that LLS has effectively reduced interpreters’ pay by 33%:

The substantial cut to fees… threatens the sustainability of the interpreting profession in this area, and as a result the access provision for the deaf community. Interpreters in London will also face the same cuts from 1 December 2016.

NUBSLI says it is with “reluctance” that it is now calling on its members to boycott LLS. This is the first time in the industry’s thirty-year history that interpreters have taken action. The union is asking interpreters not to accept any contracts with the company. It claims that LLS is trying to make “the interpreting community… simply comply with a huge cut to their fees”.

But it’s the reality of the effect LLS cuts to pay will have on deaf patients that’s most worrying. As a blog on NUBSLI website outlines, interpreters will now have to take on multiple appointments to earn enough money. But this could mean patients’ appointments will have to be shortened. Or even missed altogether. This is because of delays, a lack of services at hospitals and waiting times. And overall, this has a negative effect on patients, due to increased anxiety, confusion and stress. As the anonymous blogger said:

Interpreters can’t rush health appointments. There is too much risk involved and deaf patients deserve a quality service. They won’t get this when interpreters are clock watching and worried about getting to the next appointment.

The NUBSLI protest comes in the same week as the International Day of Persons with Disabilities. On Saturday 3 December, DPAC has organised a social media “storm” of the hashtags for the event. DPAC is taking the action in the wake of a UN report which found “grave” and systematic” violations of disabled people’s rights by the UK government.

As The Canary previously reported, the UN stated that:

The UN outlined 11 recommendations that the UK government should implement. And DPAC is calling on the Tories to act immediately on the UN findings. The social media storm on Saturday aims to bring more attention to the report.

The government’s drive for privatisation is now severely affecting services for deaf people. And the UN has exposed the government for committing “grave” violations of disabled people’s rights. Yet still, deaf and disabled people are having to fight for their most basic of rights in the UK. But with actions like the one at Canary Wharf, the government may soon be forced to listen.

The Canary asked LanguageLine for comment, but no one was available.

– Sign NUBSLI petition calling on LLS to reverse the cuts to interpreters pay and conditions.

– Sign the petition, calling on the UK government to act on the UN report into violations of disabled people’s human rights.

Featured image via Flickr and additional photography/video via Nicola Jeffery