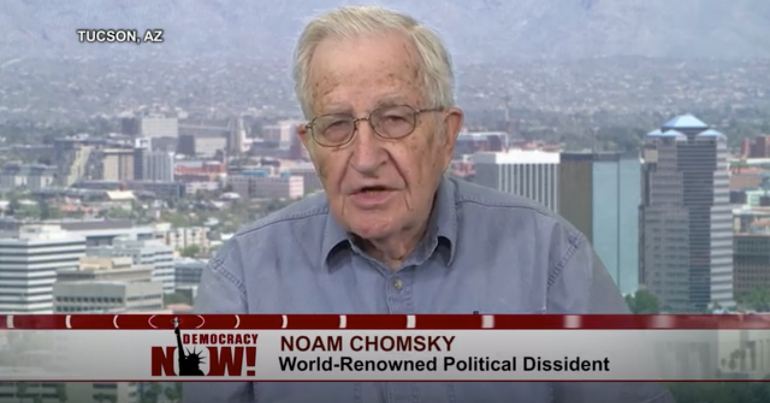 Renowned academic Noam Chomsky has condemned the US government’s treatment of immigrant children as “brutal and sadistic”, just as another deadline for reuniting them with their relatives has passed.

A deadline of midnight (US Pacific time) on the night of 26 July for the US government to reunite separated immigrant families passed with only 1,442 of the 2,551 of the incarcerated children being returned to their relatives, according to court data captured earlier that day. Authorities separated the children from their parents and other relatives as part of the Trump administration’s “zero tolerance” approach to illegal immigration, which has sparked widespread international condemnation.

In an interview with Democracy Now! on 27 July, Noam Chomsky described Trump’s policy as “brutal and sadistic”. He said:

Taking children away from their parents, sending them off somewhere, losing track of them – you know, it’s hard to think of a more brutal and sadistic policy…

the immigration policy altogether is a grotesque moral scandal here [in the US] – and in Europe, I should say.

More interesting, however, was Chomsky’s articulation of the extent to which immigration to the US, from Central America in particular, is a result of Washington’s own foreign policy. He said that immigrants from Central America are “fleeing from the wreckage and horrors of US policies.”

He then went through the histories of Guatemala, El Salvador and Honduras to illustrate how this came about. And he said of Guatemala:

back in 1954, the US intervened, sponsored a military coup, overthrew a mildly reformist elected government. Since then, the country has been a complete horror story—hundreds of thousands of people killed, all kinds of atrocities, every imaginable sort of torture. It peaked in the 1980s under Reagan. In fact, some of the places where people are fleeing from, the Mayan areas, there was literal genocide going on, carried out by the man who Reagan called a stellar exponent of democracy – a really good guy.

He added that a similar chain of events unfolded in El Salvador, where:

about 70,000 people were killed during the 1980s, almost all by the security forces – armed, trained, directed by the United States. Again, horror story since.

As for Honduras, Chomsky puts the blame for the worsening violence there squarely on the shoulders of the Obama administration. He states:

In Honduras, which not long ago had the plurality of refugees, the refugee flow started to peak after a military coup threw out the elected government – the Zelaya government – condemned by the entire hemisphere and the world, with the usual exception of President Obama. Hillary Clinton refused to call it a military coup, because that would have meant terminating military aid to the junta, which the US continued to do.

The Outliers: Costa Rica and Nicaragua

Chomsky also noted that there are two major outliers in Central America which have not seen the same levels of emigration, but for very different reasons. In the case of Costa Rica, it has not had a major outflow due to the fact that “the United States does not intervene militarily to overthrow the government and run a military regime [there]”. As for the other, Nicaragua, he acknowledged that it did suffer “severely in the 1980s from Reagan’s assaults”; but that the situation did not lead to mass emigration because “it had an army to defend it… [and] the army could, to some extent, defend the population from Reagan’s terrorist forces”.

He concluded by strongly criticizing the hypocrisy of Donald Trump and the wider US establishment, stating:

So essentially, what President Trump is saying is: ‘we’ll destroy your countries, slaughter you, impose brutal regimes. But if you try to get out, you’re not gonna come here – because America’s full.’

Chomsky’s analysis evokes the words of 17th-century poet John Milton, who wrote: “But now, with a most inhuman cruelty, they who have put out the people’s eyes, reproach them of their blindness.”

– Travel to Central America on one of Alliance for Global Justice‘s many delegations.

– Read more of The Canary‘s reporting on Latin America. And see more Global articles on Facebook and Twitter.