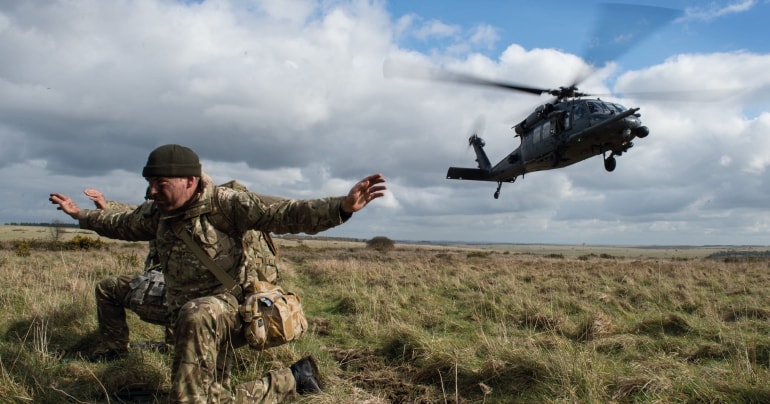 On 24 July, the Brexit minister Dominic Raab assured voters that the government is working to make sure there’s “adequate food” in the event of a no-deal exit. This wasn’t all that reassuring, but it was less troubling than the news on 29 July. Namely, that the army is “on standby to deliver food and medicine” if no deal is reached.

People reacted to the news as people generally react to Brexit news now – with a mixture of gallows humour and dread.

No deal means no food

The Sunday Times is reporting [paywall] that plans have been drawn up by ministers for the possibility of a no-deal Brexit. Said plans would see the army combating potential shortages by delivering medicines, food, and fuel. The Times writes [paywall]:

Helicopters and army trucks would be used to ferry supplies to vulnerable people outside the southeast who were struggling to obtain the medicines they needed.

In today’s Business section, it is revealed that supermarkets are warning their suppliers to stockpile supplies such as tea and coffee.

The NHS would go on a year-round “winter crisis footing”, with drugs bought from outside the EU and stockpiled in hospitals.

The article also notes that Brexiteers are likely to respond by accusing the government of “scaremongering”.

People were quick to point out this wasn’t the Brexit they voted for. Or was it? It’s difficult to tell when the only two options were ‘leave’ or ‘remain’:

David Davis: “There will be no downside to Brexit. Only a considerable upside.” What a difference 2 years of the Tories negotiating Brexit can make https://t.co/0PO9fFKGOs

The full-scale concern may not even have been revealed. This is really saying something, considering how bad things already look:

Sunday Times reporting that plans to publish weekly briefings on no deal Brexit plans have been abandoned because will panic population. That’s the same no deal HMG’s manifesto said ‘was better than a bad deal’. Scale of duplicity in British public life right now is incredible

Some were unable to believe this could be happening. Probably because Brexit negotiations have been going so well up until now:

‘Army on standby for Brexit emergency’. We are entering the theatre of the absurd. https://t.co/qrfk1jmqSS

The Daily Mail ran into some issues when reporting on the issue. Many people replying to its tweet didn’t seem to believe it. Possibly because the Mail has previously told its readers that any criticism of Brexit is ‘Project Fear’:

Plans are drawn up for troops to deliver food, medicine and fuel if Britain leaves EU without a deal https://t.co/xMfiJKNLpx

Here’s a selection of the responses: 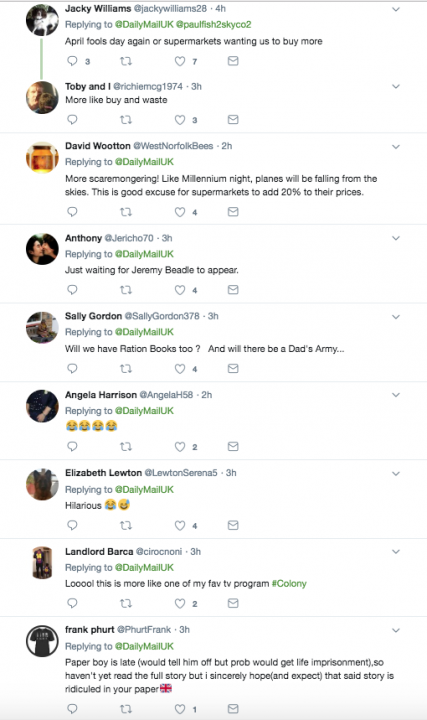 Many voters still refuse to believe Brexit could have any negative effects. This is best shown by Leave.EU using the news as an opportunity to ask for financial support:

No food, no medicine, “super-gonorrhoea”, and the army on the streets… Brexit Derangement Syndrome is going into overdrive! 😂

Some people have speculated how Brexiteers manage to remain optimistic:

It’s striking that brexiteers who accuse me of scaremongering never have details: how a border will function in the event of a no deal Brexit; why a just in time system will function. They’re like a Peter Pan audience shouting ‘I do believe in fairies’ to keep tinkerbell alive.

If there’s one positive to all this, it’s that the government has finally planned for our future outside the European Union. If there’s a negative, it’s that said future is basically the Blitz.