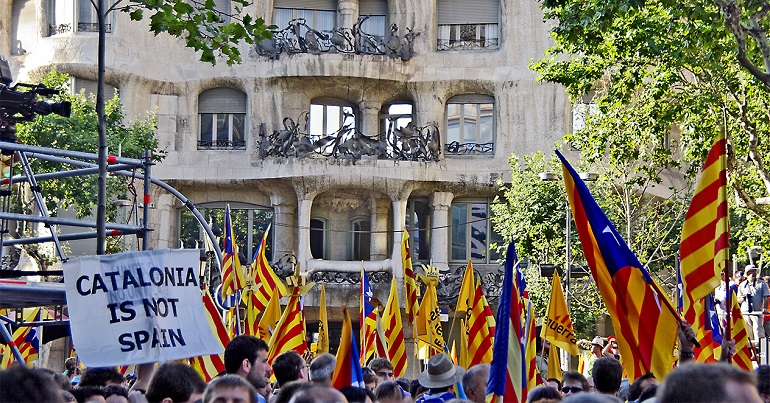 On September 11, up to one million people are set to take part in a mass mobilisation in Barcelona. The biggest of the demonstrations will take place [Catalan] on Avenue Diagonal, one of the city’s biggest roads. These plans are part of the ongoing campaign for an independent Catalonia.

September 11 is a significant date for Catalonia. It’s ‘La Diada de Catalunya’ – the Catalan National Day. In 2017, the La Diada protests attracted a million people and took place just weeks before the referendum on Catalan independence.

The demonstrations are being organised [Catalan] by the Assemblea Nacional Catalana (ANC). The ANC describes itself as “the biggest democratic and peaceful grassroots movement in Europe”.

Alongside the main demonstrations, a series of other events are planned. They will focus on building international support for Catalan independence. The pro-independence group Foreign Friends of Catalonia is behind the other events.

The campaign for Catalan independence has a long history. But in the last year, its activities and prominence have grown. And resistance from Spain has also intensified.

In 2017, eight Catalan leaders were jailed. Their imprisonment followed the Catalan parliament’s decision to declare independence from Spain following a controversial referendum. They were recently joined by a further five former Catalan government ministers and spokespeople. Amnesty International is amongst those who have condemned the imprisonments.

In October 2017, former Catalan President Carles Puigdemont fled to Belgium in order to avoid arrest. The Spanish state is trying to have him extradited to Spain. But on 28 July, it failed in its latest attempt to do so.

Action by pro-Independence groups has also continued in Barcelona. Earlier in July, a protest calling for the release of imprisoned Catalan leaders hit the city. This followed similar protests in April which attracted over 300,000 people.

The movement for Catalan independence continues to build momentum. And the Spanish government will be feeling the pressure.