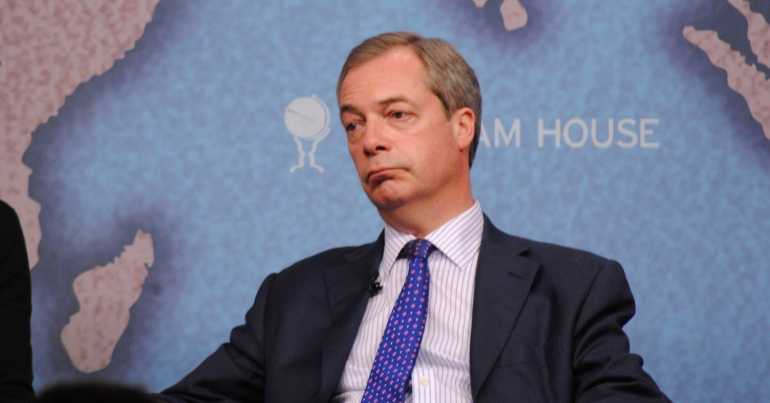 Daniella Dos Santos called into Nigel Farage’s LBC radio show to tell the former UKIP leader about how Brexit will impact the number of vets in the UK. Her argument left him completely speechless; which might be a first for the ex-UKIP leader.

@mrjamesob @theousherwood @LBC Please, this needs to be watched and shared. @Nigel_Farage absolutely torn a new one by my new heroine Daniela from Maidstone. Sorry for my rubbish video of a video but this should not be lost in the mass of information out there. pic.twitter.com/HF5E1bR2Se

Dos Santos – who is herself a vet – wanted to emphasise to Farage that Brexit will lead to a “300% shortfall in vets”. An estimated 95% of official veterinarians working in abattoirs are from overseas, with the majority from the EU. John Fishwick, the president of the British Veterinary Association (BVA), has said:

Research by the RCVS has shown nearly a third of vets and vet nurses whose nationality is non-UK European are considering a move out of the UK. To prevent an acute crisis in veterinary capacity, the BVA is urging the Home Office to add veterinary surgeons to the Shortage Occupation List.

Farage responded to the caller by saying:

Dos Santos says, “we don’t have enough vets to certify for export”. Indeed, as Fishwick points out:

The volume of exports requiring veterinary certification could increase by as much as 325%.

Dos Santos stressed that what she was saying wasn’t fearmongering – “it is true”. Following this remark, there was complete silence from Farage.

That long drawn out moment of silence where he has nothing after @VetDannii says “it’s true.” : absolutely priceless.

I think that's the first time I've seen him lost for words.

He's not used to being confronted by people who know what they are talking about.

Farage himself admitted that we don’t have enough nurses or doctors. Since the Brexit vote, the number of nurses coming from the EU to work has fallen by 89%. Between 2014 and 2017, we’ve also seen a 26% drop in the number of EU doctors arriving in the UK to work. There are now 9,500 vacancies for NHS doctors. Labour MP Liz Kendall said:

If the government introduces new restrictions on EU immigration after Brexit and applies them to NHS staff then the situation will only get worse.

Farage previously commented that he would prefer Indian and Australian immigrants to eastern Europeans. Opening up the UK to more Commonwealth migrants was one of his main talking points during the EU referendum campaign. But as Daniella pointed out to him, the Brexit process has so far resulted in the loss of workers that we desperately need. He couldn’t come up with a half-decent response to her argument – he could only sit there speechless. And this really speaks louder than words.