Cuts to legal aid are causing a crisis in our justice system, say MPs - The Canary 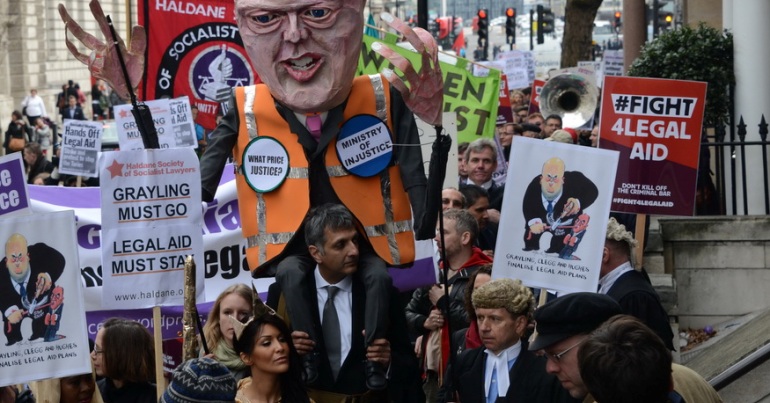 A new report by the Justice Committee within the House of Commons has shone a spotlight on legal aid. It shows how under-funding is restricting access to competent legal representation. In a statement, Justice Committee chair Bob Neill MP offered a damning indictment of the current state of our justice system. He called on the government to act, saying:

Under-funding of the criminal justice system in England and Wales threatens its effectiveness, tarnishing the reputation of our justice system as a whole, and undermining the rule of law.

These reviews should be carried out with urgency to end the crisis we are currently facing.

Background to the report

The Justice Committee published this report in response to a separate inquiry. This had uncovered that legal aid funding was insufficient in allowing defence lawyers to review the evidence for their cases fully. Those on legal aid thus received an inadequate legal defence. In its conclusion, the current report recommends “a comprehensive and independent review of criminal legal aid… with the aim of devising a scheme that is sustainable and user-focused”. The report also recommends that this review is launched no later than March 2019 and concluded within 12 months.

The impact of severe austerity measures under the Conservative government has been undeniable and far-reaching, with cuts to funding prompting strikes by lawyers in March of this year. While the current report may call for urgency on the part of the government, NGOs, university researchers and lawyers themselves have repeatedly raised the issue of the most vulnerable people being denied their right to competent legal representation.

Who’s affected the most?

A report [pdf] published by the Centre for Human Rights in Practice at the University of Warwick in April 2013 outlined the impact of funding cuts and changes to legal aid legislation on lawyers and their clients. A more recent report by Amnesty International, aptly named Cuts that Hurt, addressed similar issues. The report examined the human rights implications of cuts to legal aid. In particular, it addressed the impact on migrants and refugees, homeless people, domestic violence survivors, and children and young people.

In December 2017, in an article for the Guardian entitled The cruelty of legal aid cuts for abused women is now undeniable, Deborah Orr described how domestic abuse survivors are having to represent themselves in legal proceedings. Representing themselves not only causes these women additional delays and expense, but can also cause additional trauma. They are forced to face their abuser and once again be exposed to their manipulation in court. Orr makes a compassionate case for why third-party representation, and access to a competent defence via legal aid, is the right of all domestic abuse victims.

This is just one example where drastic cuts to legal aid since 2012 have disproportionately affected vulnerable groups. Children, young people, people with physical and mental illnesses or disabilities, and poor people are all suffering because they were denied their right to adequate legal representation. If everyone is equal under the law, it’s time the government acted to ensure everyone is equally represented, too.

– Read The Canary’s other articles on legal aid.

– Write to your MP, asking them to support an independent review of legal aid.