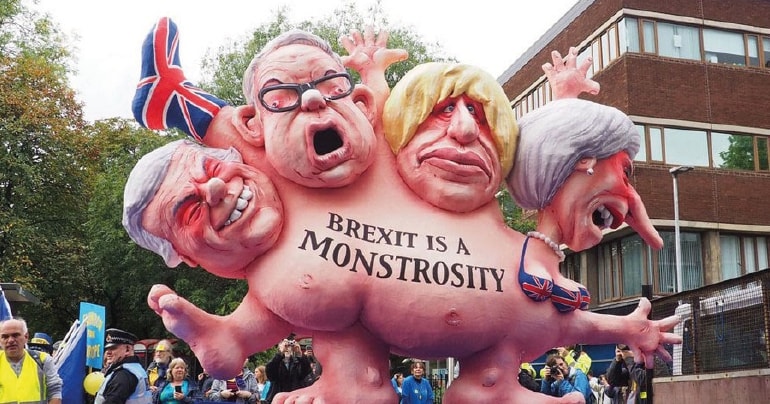 The government has been preparing for a potential no-deal Brexit. Such plans could see the army being on hand to deliver food, medicine, and fuel. One commentator has a theory on why people might actually enjoy that:

I'm pondering a theory. Britons (innate make-doers) were never happier than during WWII and crave the need to Keep Calm And Carry On. Is hurtling towards a beans-hoarding, mustn't-grumble, darn-yer-socks sort of a no deal Brexit some sort of nation-level wish fulfillment?

Jeremy Cliffe is the Berlin bureau chief for the Economist. He’s not a Brexit supporter – having tweeted the following before his ‘theory’:

Beggars belief that Britain is voluntarily putting itself through this chaos https://t.co/6LFchvi8C9

To many, his thoughts are worth analysing because they show off a typically-held, but perhaps mistaken, British attitude. Namely that poor people are positively cheerful about dealing with catastrophe if it benefits Britain in the end:

Some people did agree with Cliffe, but others pointed out that their thinking had some issues: 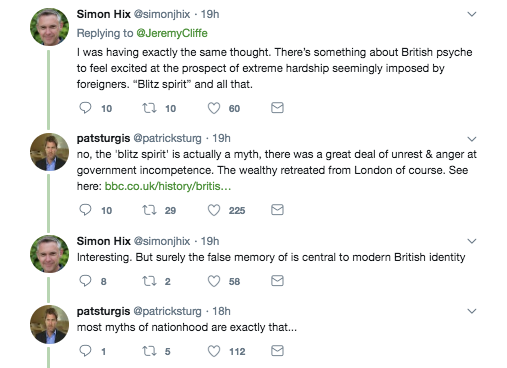 The BBC article referenced above notes:

Our heritage industry has encouraged a ‘Myth of the Blitz’, that differs from the reality of wartime experience. The myth is that we all pulled together, that spirits were up as young and old, upper and lower classes muddled through together with high morale under the onslaught of the Nazis.

But the ‘Myth of the Blitz’ is just that – a myth. As members of the establishment were able to take refuge in country houses, in comfort and out of the way of the bombs, or in expensive basement clubs in the city, the lower-middle and working classes were forced to stay in the cities and face up to the deadly raids with inadequate provision for shelter.

It was a time of terror, confusion and anger. Government incompetence – almost criminal in its extent – displayed what was almost a contempt for ordinary people. It was time for the people to help themselves to the shelter they needed. It was a time of class war.

Some people do believe in the mythical ‘Blitz spirit’. The following, which isn’t from a parody account, has hundreds of retweets and likes: 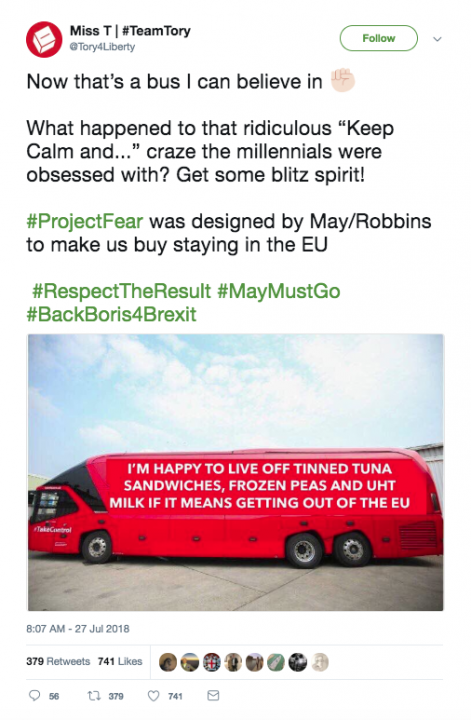 Piers Morgan also famously compared Brexit to a world war. He did actually vote remain, but supports us honouring the referendum – if only to spite Gary Lineker:

Britain prevailed over two World Wars during the last century.
I'm sure we can prevail over Brexit, however it unravels. https://t.co/6GWPiSMTma

Another notable thing about WWII is that it was followed by the socialist government which formed the NHS:

If you're suggesting bit of blitz spirit will see us through a hard brexit then you should also be thinking about how that worked: war socialism which then led to a thirst for post-war socialism, too. I'm not sure that's what yer hard brexiteers are hoping for. But if not: what?

If there truly was a ‘spirit’ of the war, it wasn’t that people can bear anything; it’s that some things are unbearable. The people of Britain shouldn’t have had to endure the Blitz, and they shouldn’t have to endure austerity. The only wish most people want fulfilling is for things to be better. Anyone who thinks otherwise is a fantasist.