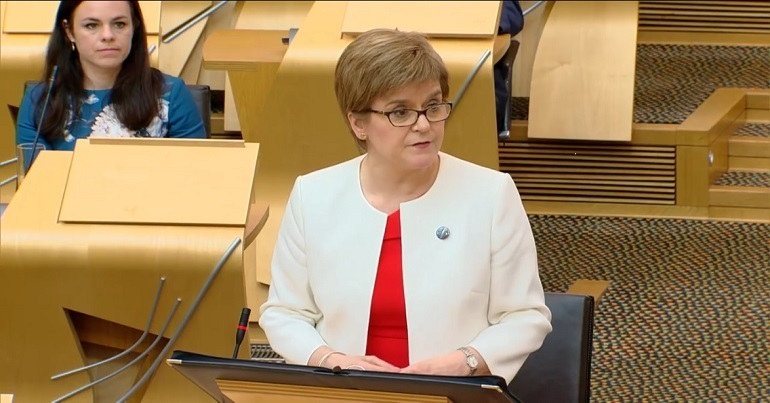 It’s been yet another rollercoaster of a week in terms of Brexit revelations. These included the army potentially being drafted in to help overcome “blockages at ports” in the event of a no-deal Brexit.

Scottish Labour MP Ian Murray has now written to Scotland’s first minister Nicola Sturgeon to ask her to back a people’s vote on the final Brexit deal. He urged Sturgeon to consider the UK’s national interest above the SNP’s aim of holding another Scottish independence referendum.

The letter to Sturgeon

On 29 July, the Scotsman reported that Murray, a member of Scottish Labour for the Single Market, wrote to Sturgeon saying:

Your support would have a significant impact and could be pivotal in securing a vote on the Brexit deal. The SNP will hold its annual conference this autumn and I would also urge you to consider encouraging your membership to send a message of support for a People’s Vote

Murray did, however, acknowledge the SNP’s desire to hold ‘indyref2’:

I am aware of concerns within the SNP of the impact of a People’s Vote on your campaign for Scottish independence, but I call on you to put the national interest ahead of your party’s interest. You were elected to represent all the people of Scotland, who voted overwhelmingly for Remain, not just the minority of people who support Scottish independence

A spokesperson has responded on behalf of the first minister, pointing out that the SNP is not the barrier to a second referendum:

It is not the SNP who are standing in the way of a second EU referendum – Ian Murray’s time would be better spent persuading his own Labour colleagues to back him, as currently they are signed up to a hard Brexit which will be devastating for jobs and living standards in Scotland

The spokesperson went on to suggest that it was the Labour Party and the UK government that had ignored Scotland’s Remain vote.

What are the other parties saying?

Most Scots simply want us to get on with Brexit and for the Scottish Government to work with the UK Government to get the best possible deal.

However, these new calls from Ian Murray marry up, somewhat, with the aims of both the Scottish Green Party and Scottish Liberal Democrats. The Scottish Greens support being a member of the EU and believe it should be ratified in a referendum. The Greens also backed the SNP Scottish government to hold another independence referendum in a vote at Holyrood in March 2017. This request was knocked back by the UK government; a spokesperson for Theresa May said:

Now is not the time for another divisive independence referendum and there is no appetite for one. The people of Scotland voted decisively in 2014 to remain part of the United Kingdom and that should be respected

The Lib Dems, who support EU membership within the UK, have also urged the SNP to back a second vote on the final EU deal.

What does the electorate think?

Currently, opinion polls of people in Great Britain show 53% in favour of remaining in the EU. In Scotland, the latest poll carried out in March 2018 states very little change, with 61% in favour of remaining. In a recent poll, 51% of respondents now support a people’s vote. Meanwhile, the current polls supporting Scottish independence have lifted to 47% (with ‘don’t knows’ removed) in July 2018, from 45% at the 2014 vote.

The SNP claims it has a mandate to hold ‘indyref2’ after winning the Holyrood 2016 Scottish election. In its manifesto, it proposed holding another Scottish independence referendum if Scotland was “taken out of the EU against our will”. It also put forward a compromise in the form of the publication Scotland’s Place in Europe, which seems to have been ignored. This document proposed Single Market and Customs Union membership for Scotland, which is not part of the current [paywall] Brexit plan.

Opinion polls seem to be on a knife edge. It’s hard to predict the direction Scotland will take or should take. But one thing that’s clear from the EU referendum vote and ongoing polls is that Scotland wishes to remain in the EU. Perhaps, then, it will be worth the first minister’s while to consider backing a people’s vote on the final Brexit deal.

– Believe we need a People’s Vote? Sign the petition to support the cause.

Featured image via: The Scottish Parliament/YouTube