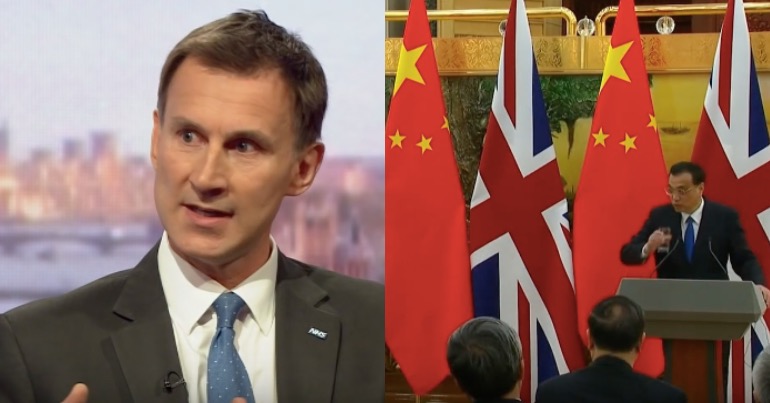 Jeremy Hunt just humiliated his wife at his first official visit to China as foreign secretary. In the cringeworthy exchange with Chinese officials, Hunt mistakenly said his wife was Japanese when she’s actually Chinese.

Hunt made the awkward mistake during a conversation with Chinese foreign minister Wang Yi, saying:

Um, my wife is Japanese. My wife is Chinese. Sorry, that’s a terrible mistake to make.

He then sought to rectify his blunder by boasting of his family’s connections to China, stating:

My wife is Chinese and my children are half Chinese, and so we have Chinese grandparents who live in Xian and strong family connections in China.

Hunt has been married to Chinese-born Lucia Guo since 2009 and the couple has three children. The pair met in Warwick in 2008 whilst she was working for Warwick University as a recruiter for Chinese students.

The embarrassing blunder comes only weeks after Hunt replaced Boris Johnson as foreign secretary following Johnson’s resignation. Hunt’s predecessor was no stranger to embarrassing himself and the UK on the global stage.

Johnson had been accused of a shocking number of racist insults prior to his resignation. And like Hunt, Johnson has also offended China in the past. During the Beijing Olympics, Johnson offended the host nation by insisting that table tennis, hugely popular in China, was an English invention, originally called “wiff-waff”.

Whilst Japanese-Chinese relations have significantly improved in recent times, bad blood between the two nations is still present. So Hunt’s insensitive mistake will come across as sheer ignorance considering the two nations’ history of conflict.

Hunt is in China in order to improve UK-China relations ahead of the UK’s exit from the European Union. However, with blunders like this, we shouldn’t hold our breath. He has embarrassed the UK on a national level as health secretary, and it seems he’s now embarrassing the UK on a global level too.