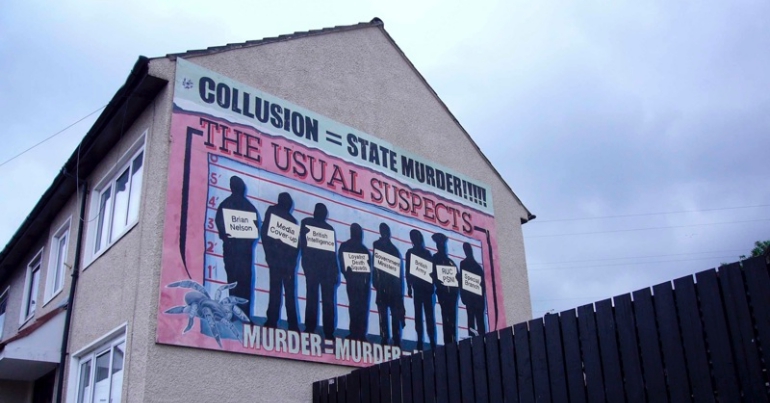 A decision by the UK government to withhold [paywall] documents relevant to the murder of Belfast solicitor Pat Finucane is denying his family justice. The documents contain information on Brian Nelson, a British army agent in the loyalist Ulster Defence Association (UDA).

Pat Finucane was a human rights lawyer from Belfast who was killed by the UDA on 12 February 1989. Nelson is alleged to have played a role in his murder.

The Finucane family is demanding justice. They want to know the full facts including who planned his murder. Finucane’s widow Geraldine said it’s not about “who pulled the trigger but those who pulled the strings”.

An investigation by Canadian judge Peter Cory recommended a full public inquiry into his murder.

A further investigation by Sir Desmond de Silva forced David Cameron to admit to the House of Commons that there had been “shocking levels of state collusion” in his murder. Cameron apologised to the Finucane family.

But the de Silva report cleared the British state of conspiracy. So the family continued demanding a public inquiry. Cameron rejected these demands in 2012, as did the Belfast Court of Appeal in February 2017.

As a result of these rejections, in June 2018, the Finucane family took their case to the Supreme Court in London. They are now awaiting a decision from the court.

The papers were due for release under the 20-year rule. But Whitehall departments can request that files remain secret if their publication could damage foreign relations or undermine defence and security. In the case of Brian Nelson, the documents will remain secret due to:

public interest issues and protection of intelligence sources and methods.

A representative of the Pat Finucane Centre (PFC) told The Canary:

It is alarming that the cabinet office would retain files of notorious British agent, Brian Nelson, who was implicated in a number of murders during the conflict.

To cite ‘public interest’ and ‘protection of intelligence sources’ adds further insult to his victims.

What needs to happen now

The Finucane family need a full and public inquiry into this murder to ensure justice. Accordingly, the same principle needs to apply to other cases of state collusion. British people need to know the truth about their government’s role in the Northern Ireland conflict that claimed 3,637 lives.

– Contact Justice for the forgotten, PFC, and Relatives for Justice