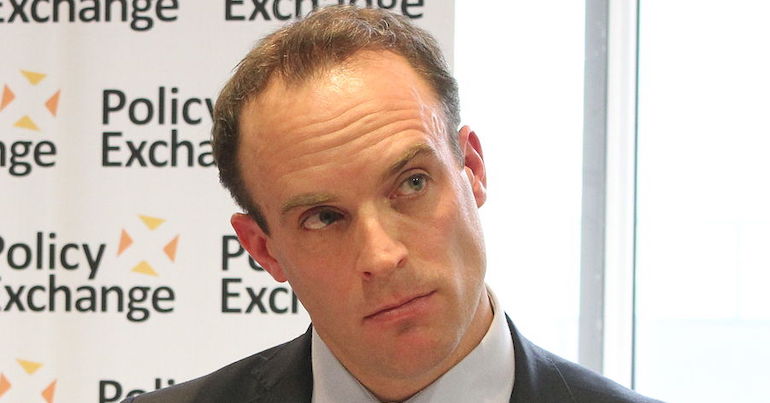 Boris Johnson has insisted the UK will leave the EU by 31 October, “no ifs or buts”. His hard-Brexit and hard-right cabinet and government has pledged to push Brexit through, even if this means a no-deal situation. And, as Halloween draws closer, some pro-Brexit ministers seem to be concocting an entirely new version of reality.

How can we trust a government that goes from a million-in-one odds against no deal, to it being a very real prospect?

To which Raab replied that the government was “turbo-charging” no-deal preparations to ensure we leave by October. He also suggested that the situation is down to the EU’s ‘refusal to negotiate’, and not the new government’s fault. But later in the segment, Husain pointed out that the referendum mandate “was not for no-deal”. Raab said:

The mandate certainly wasn’t to leave the EU if the EU let us. It was an ‘in / out’ referendum and we made clear… that we should strive for a good deal, but if that wasn’t available that we should go on and make a success of Brexit and so that was discussed…

When Husain said she didn’t “remember that being discussed” Raab claimed:

I was questioned on it by the BBC almost every time I appeared and so was Michael Gove… There’s all sorts of interviews which said that of course we’d prefer a deal, but that there would be a risk

It turns out, though, that the evidence really doesn’t seem to be there.

We’ve listened to as many clips as we can find of interviews given by Mr Raab and Mr Gove between February 2016, when the EU referendum campaign unofficially began, and the vote on 23 June 2016.

We can’t find an interview where Mr Raab warned explicitly about the possibility of a no-deal Brexit during the referendum campaign.

It located some oblique references and acknowledged it couldn’t access some BBC interviews. But it couldn’t find clear evidence to support Raab’s claim. It concluded:

We can’t find any evidence of Mr Raab talking about the dangers of leaving without a deal before the vote either.

As former Brexit secretary, Raab’s credentials aren’t great. In the 2017 general election, he didn’t seem to know what the UK’s national debt was. He also got the Irish Sea confused with the Red Sea. And in November 2018, he shared an ‘enlightening revelation’ about the UK’s physical closeness to Europe, stating:

We are, and I hadn’t quite understood the full extent of this, but if you look at the UK and if you look at how we trade in goods, we are particularly reliant on the Dover-Calais crossing.

As the pound slumps amid ongoing fears about a no-deal Brexit, Raab’s now reinventing a Brexit history that didn’t, it seems, actually exist. It’s tempting to say ‘you couldn’t make it up’. But with Raab onboard, that wouldn’t actually be true.