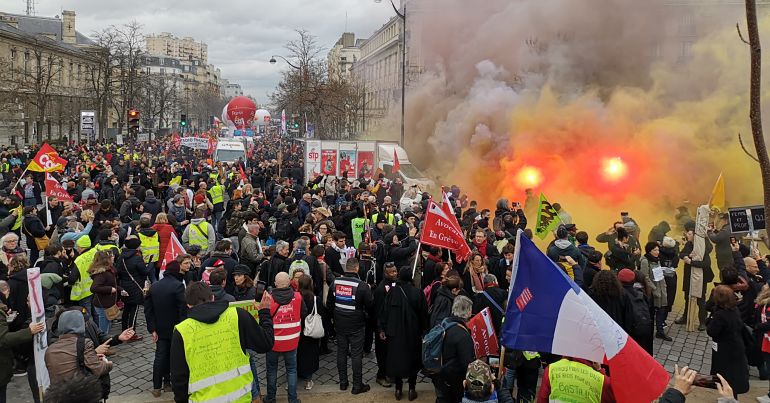 On 20 February, nearly 100,000 people across France protested against proposed reforms to the country’s pension system. According to those striking, the new system would force them to work for longer, for less.

While France’s pension system is currently running a deficit, it remains one of the best in the EU. Figures from 2018 show that only 7.3% of French pensioners are at risk of poverty, as opposed to 21.6% in the UK [provisional figure] and 18.7% in Germany.

The current strikes have consequently won widespread appeal among the French population. And although the government made concessions in January, support for the strikes has remained fairly stable.

The Canary was on the streets of Paris to cover the demonstration.

President of the Rich

In 2018, polling figures showed that 78% disagreed that Macron, a former investment banker, “was in close touch with the concerns of French people”. The year before, a stunning 82% of French people polled thought Macron’s tax policies “favor the rich” and not the poor.

Though neither comparison is particularly flattering, Macron now looks more like France’s David Cameron than Tony Blair. Some on the streets of Paris went one step further, conjuring the ghost of Margaret Thatcher to condemn the president, who may run for election again in 2022.

A coalition of leftist parties, led by Jean-Luc Mélenchon’s La France Insoumise (Unbowed France) party, has tried to frustrate Macron’s attempt to pass pension legislation by tabling 41,000 amendments. To bypass this, Macron looks more and more likely to trigger article 49.3 of the constitution, which would effectively grant him executive power over legislating.

According to Open Democracy, during recent protests in France, 35 people have been blinded; five people have lost hands “torn off by explosive grenades”; 318 protesters have suffered “severe head injuries”; and “6,000 persons in total have been injured”.

Only this month did the French government finally admit that the French police’s violent behaviour was problematic and “unacceptable”.

On the streets of Paris, protesters wear helmets and masks to protect themselves from missiles and tear gas. Although the relationship between French protesters and the police is visibly tense, the 20 February protest passed without violence. “They save their ammo for the yellow vests”, said one activist at the march. Macron, meanwhile, once described France as the “land of human rights”.

Union membership in France has slowly declined since the 1970s, although it remains at around 11%. French unions, meanwhile, “don’t have well-endowed strike funds”. Workers must consequently make even greater financial sacrifices to strike – let alone strike over a sustained period of time.

The unions were nonetheless well – and creatively – represented on the streets of Paris. Didier Le Reste, a Paris councillor and former leader of the CGT railway workers’ union, said, “we still have a significant hitting power, mobilising power”.

A solidarity fund for those striking has also been set up by the General Democratic Confederation of Labour (CGT). By the end of January, it had raised almost €3m.

This activist complained that his sign had been censored by French news channel TV3 in 2018, so he brings it along to every protest. “I will hold this above my head all day, I don’t feel the pain”, he said. After four hours, it starts to seem believable.

French political culture, a deep distrust of Macron’s economic agenda, and the response of the French police make for a potent political cocktail. Widespread resistance to Macronism looks unlikely to end soon.