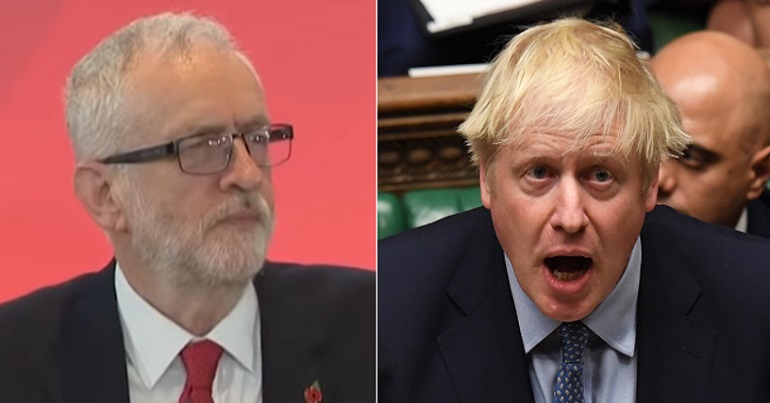 As Storm Ellen prepared to batter the UK, Jeremy Corbyn took to Twitter wondering where Boris Johnson was. And it seems some people have a better idea of the PM’s location than others.

As The Canary reported, parts of the country are braced for yet more flooding. On Saturday morning, the Environment Agency had 90 flood warnings in place, as well as 153 flood alerts, covering areas from Wiltshire to Cumbria. This is now three weekends in a row where severe weather has caused chaos across the UK.

But so far, Johnson has failed to visit flood-hit areas. As HuffPost reported, he’s been hauled up in his ‘government-owned mansion’ since after the cabinet reshuffle. Even the Daily Mail asked why the PM hadn’t visited communities suffering because of the horrendous weather.

So, it’s been down to Corbyn to ‘show the way’ (the Mail‘s words, surprisingly) on how to lead in a national crisis. Because he’s been out, supporting people affected by the weather. And on Saturday 22 February, he took to Twitter asking a question on many people’s lips:

Some people on social media thought they knew where the PM was:

He has been chilling at Chevening for the last week.

Meanwhile, Paul Gardner though a classic children’s puzzle could do with updating:

But a lot of apparent Tory supporters were adamant Johnson was ‘running the country’:

Boris is running the country, which you will never do! 😂 pic.twitter.com/e1CWFTxQg4

So, if Johnson has been ‘running the country’, then he’s got an odd way of doing it. Because since he’s been ensconced in his mansion, the country appears to be going to the dogs.

The PM, while hiding away, has:

So, yes. Johnson has been ‘running the country’. But he’s been effectively running it into the ground.

But what Corbyn’s video also sums up is the old phrase ‘look at what you could have won’. Because once again, he’s shown true leadership in a crisis affecting ordinary people in the UK. This couldn’t be more removed from Johnson’s mansion ‘jolly’. Sadly, Corbyn will be leaving office soon. And it remains to be seen if any of the current Labour leadership hopefuls are willing or able to fill his shoes. But we do know that our current PM would never be able to.