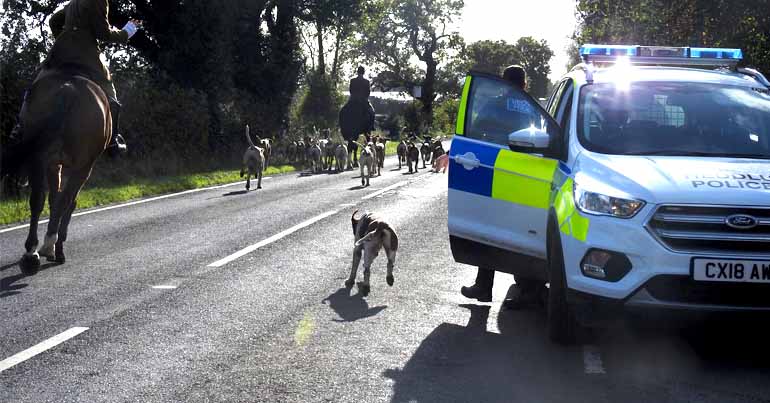 On 24 July, North Wales Hunt Saboteurs claimed that North Wales Police (NWP) are “involved in an [operation] with the Flint and Denbigh hunt to get rid of protesters”. The hashtag “#OperationYada” accompanied the claim. Several days later, the NWP Rural Crime Team published a video on Twitter denying that ‘Operation Yada’ existed. But the truth suggests this team tried to mislead the public.

What is ‘Operation Yada’?

Local paper NorthWalesLive reported on 24 July that two members of North Wales Hunt Saboteurs had been cleared of assault charges against councillor and farmer Edward Lloyd-Ellis. This report said “police had an operation in response to hunt disruption”.

The sab group shared this article on Facebook and said:

North Wales Police are involved in an [operation] with the Flint and Denbigh hunt to get rid of protesters.

It will all come out in the wash #OperationYada

People then began asking the NWP, the Rural Crime Team, and Police and Crime Commissioner (PCC) Arfon Jones about the operation:

@NWPolice please can you explain what Operation Yada is?? Isn't it an operation to stop hunt disruption by saboteurs on the illegal hunting by Flint and Denbigh Hunt, tut tut , shouldn't be colluding with an illegal hunt

Would @NWPolice or the PCC @ArfonJ like to explain what Operation Yada is all about? Because if you leave it to us it will not be sugar coated

The NWP Rural Crime Team didn’t respond until it issued a video on 31 July. In the video, team manager Rob Taylor denied knowing about an ‘Operation Yada’ and suggested it “doesn’t even exist”:

I don’t know. I’ve never heard of Op Yada. I don’t know what Op Yada is…

When we get questions in that are unfounded and have no basis and are just there to sort of try and provoke us, we simply don’t answer them. It’s just not worth getting involved or embroiled in a discussion over something that doesn’t even exist.

However, the following day, NorthWalesLive published an article on a clash between Lloyd-Ellis and North Wales Hunt Saboteurs member Dafydd Hughes. The report quoted NWP chief inspector Jeff Moses, who said the force:

has a well-established operation in place to police the issues surrounding hunt activities and to investigate any offences which are evident or reported.

This operation has a command structure and detailed plans which make it clear that we police any incidents with impartiality and that we will facilitate peaceful protest.

As police monitoring group Netpol pointed out, this statement appeared to contradict Taylor’s claim the day before.

The Canary contacted the NWP about this apparent contradiction. We asked if it has an operation for hunting and protests and, if so, what it has named the operation. It replied on 5 August, saying:

the operation… is called Operation Yarder

This was also backed up by a Freedom of Information request by Kevin Blowe of Netpol. The NWP told Blowe on 6 August:

there is a policing operation in place for the last 3 years (Op YARDER) to police hunting and hunt protest activity in North Wales.

Taylor was technically correct saying that ‘Operation Yada’ doesn’t exist. But his answer glibly side-stepped the spirit of the public’s concern. Netpol told The Canary:

The comment posted by Rob Taylor… was particularly contemptuous towards members of the public expressing concerns about the force’s relationship with the Flint & Denbigh Hunt. The denial of any knowledge of ‘Operation Yada’ and the dismissal of questions about it as conspiracy theories is astonishing when North Wales Police has been conducting ‘Operation Yarder’, policing hunting and protests against hunt activity, for three years.

The Rural Crime Team’s responsibilities include wildlife and environmental crime and it seems inconceivable that its members wouldn’t know about it. Either this is incompetence or it is wilful dissembling. No wonder opponents of hunting, who are simply trying to monitor breaches of the law, feel the police are refusing to act impartially.

In the NWP’s response to The Canary, PCC Jones said:

The North Wales Rural Crime Team Twitter account is unusual in that it is not risk averse in what it posts and as a consequence has a large number of followers. Not everything they publish is universally approved and they have had to mute and block a number of accounts in the past because of the content. As with all policing roles the rural policing teams police communities where there are tensions and there are difficulties in maintaining balance and impartiality.

The NWP’s apparent sleight of hand over public knowledge about Operation Yarder makes a mockery of its alleged impartiality.

The Canary contacted the NWP with the allegation of an attempt to mislead the public. But it declined to respond.

‘Coming out in the wash’

In January, Cheshire Police issued a now-deleted statement that said video footage online “frequently… does not reflect the full scenario”. It was referring to footage that Cheshire Hunt Saboteurs made public on social media. However, Cheshire’s PCC David Keane challenged the statement as “inappropriate” and, as a result, the police took the statement back. But the incident appeared to be an attempt to undermine public trust in evidence put forward by sabs.

Hunting is illegal. Saboteurs and monitors ensure hunts aren’t breaking the law. Yet the NWP felt it was appropriate to issue a misleading statement that appeared to discredit North Wales Hunt Saboteurs. But now, the truth has “come out in the wash”. And it raises serious questions about the NWP Rural Crimes Team’s impartiality.